The United States has also called on the Houthis to release Yemeni employees of the US government. 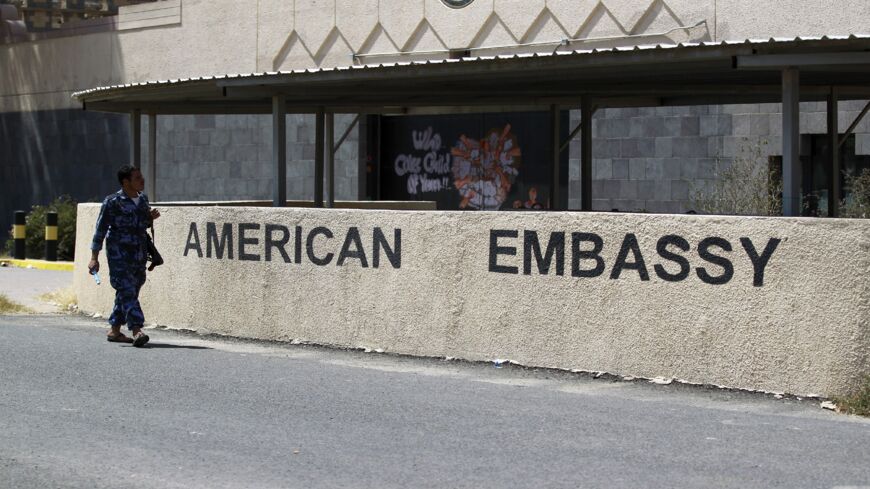 A Yemeni security guard walks past the compound of the US Embassy in the Yemeni capital, Sanaa, on Oct. 8, 2015. - MOHAMMED HUWAIS/AFP via Getty Images

The United Nations on Wednesday called for the immediate release of two UN staff members detained earlier this month by the Houthis in the Yemeni capital of Sanaa.

A spokesperson for UN Secretary-General Antonio Guterres said the senior Houthi officials gave the UN assurances last week that they would release the men. One of the Yemeni staffers works for the UN Educational, Scientific and Cultural Organization (UNESCO), and the other is employed by the UN human rights office.

“As far as the secretary-general is aware, the staff members are being held without charge, and no specific information has been provided regarding the reasons for their arrest,” UN spokesperson Stephane Dujarric said, adding that the Yemeni staff have been unable to contact their families.

“As of today, the staff members remain in detention in breach of UN privileges and immunities and in direct contravention to the assurances we received last week,” Dujarric said. “We call again for their immediate release.”

The United States has also urged the Houthis to release an unspecified number of Yemeni security staff working for the US Embassy in Sanaa. The State Department says the majority of the detained employees have been released, but others are still held without explanation.

As the civil war escalated in 2015, the United States suspended operations at its embassy and established a remote mission in neighboring Saudi Arabia. The State Department called on the Houthis to "immediately vacate" the now-shuttered compound.

“The US government will continue its diplomatic efforts to secure the release of our staff and the vacating of our compound, including through our international partners," a spokesperson told Al-Monitor in an emailed statement last week.

The Iran-backed Houthi group overran much of Yemen, including Sanaa, in 2014 and expelled the internationally recognized government led by President Abed Rabbo Mansour Hadi. A US-backed, Saudi-led military coalition intervened in the conflict in March 2015 to restore the Yemeni government. The fighting has since killed more than 100,000 people, uprooted millions from their homes and left Yemen on the brink of famine.