The Houthi rebels detained several Yemenis working for the US government earlier this month. 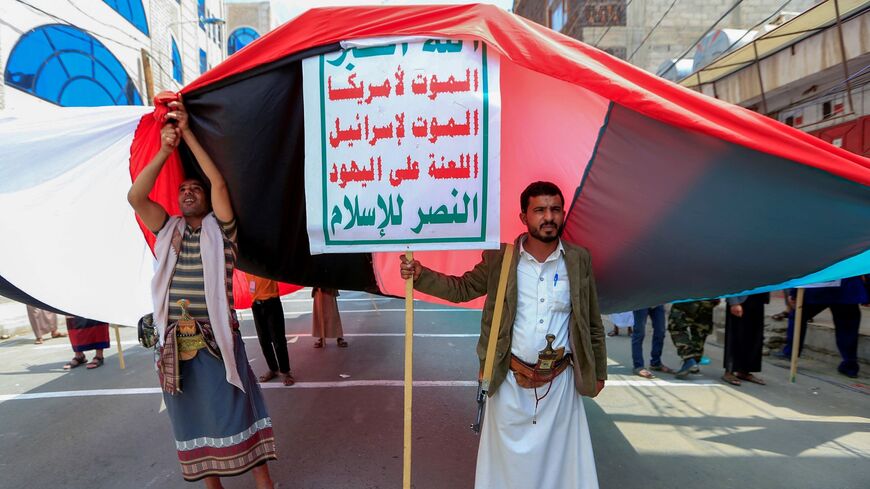 Yemeni demonstrators lift an anti-American and Israeli placard beneath a giant national flag as they rally in the capital Sanaa, on August 22, 2020, to protest the US-brokered deal to normalise Emirati-Israeli relations. - MOHAMMED HUWAIS/AFP via Getty Images

The leaders of the House Foreign Affairs Committee want the Biden administration to do more to free US embassy staff in detention in Yemen.

“If the Houthis fail to comply, we urge you to exercise all available leverage to secure the release of the detained LES and ensure the well-being of our LES in the future, including via relocation, if necessary,” they wrote, using an acronym for “locally employed staff.” Meeks chairs the committee and McCaul is its top Republican.

Tens of Yemeni citizens working for the US embassy and the US Agency for International Development (USAID) and two United Nations employees were detained in the Yemeni capital Sana’a earlier this month by the Houthi rebels. Both the US government and the UN have demanded the Iran-backed rebels release the detained individuals. The US Treasury Department also sanctioned a Houthi leader last week over the issue. Some of the US government employees have since been released, but a number remain in Houthi custody, according to State Department officials.

Yemen has been embroiled in a civil war between the government of President Abed Rabbo Mansour Hadi and Houthi forces since 2014. The Houthi forces receive support from Iran. In 2015, a Saudi-led military coalition intervened on behalf of the Hadi government. Hadi is currently in exile in Saudi Arabia. The Houthis control Sana’a and much of western Yemen. Most of the rest of the country is in the hands of the government and its nominal ally the Southern Transitional Council, which supports autonomy for the south.

Most recently, the Houthis have been conducting a major offensive to take the city of Marib.

US President Joe Biden made ending the war in Yemen a priority for his Administration.

Some members of Congress are critical of Saudi conduct in the war and oppose US arms sales to the Kingdom.  Democratic Rep. Ilhan Omar of Minnesota introduced a resolution earlier this month to block a US arms sale to Saudi Arabia. Omar is also a member of the House Foreign Affairs Committee.

It is unclear what leverage the United States has over Houthi forces. The rebels did not accept a Saudi-proposed cease-fire earlier in the year, despite US pressure. Meeks and McCaul urged the Department of Defense to work on "intercepting weapons smuggled by Iran to the Houthis.” They also thanked Oman for its help securing the release of some of the US government employees.