A presidential decree has transferred zoning control of Istanbul’s opposition-run Princes’ Islands to the Ministry of Environment and Urbanization, raising concerns of anti-democratic practices by Turkey’s ruling party. 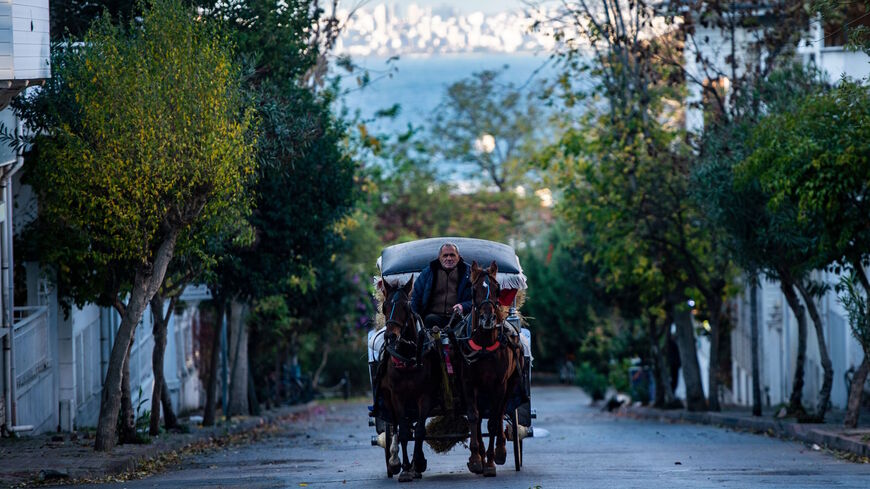 A horse-drawn carriage travels a street on the island of Buyukada off Istanbul, Nov. 29, 2019. - YASIN AKGUL/AFP via Getty Images

ISTANBUL — In a presidential decree published late Thursday, Istanbul’s opposition-held Princes’ Islands were designated as an “environmental protection area,” transferring the management of zoning rights there to Ankara’s Ministry of Environment and Urbanization.

Presented as an environmental policy to mitigate further ecological degradation in the Marmara Sea, where the islands are situated just south of Istanbul, the move raised concerns of anti-democratic overreach by Turkey’s ruling Justice and Development Party (AKP), which has been accused of meddling in multiple opposition-run municipalities in recent years.

“This is something the government has been doing quite systematically since 2019,” Berk Esen, an assistant professor of political science at Sabanci University, told Al-Monitor.

Particularly in Istanbul, Esen said Ankara has been “pushing hard” to limit the jurisdiction of the municipal government, not only for political motives in the run-up to general elections expected in June 2023, but also to nullify opposition to the large construction projects that remain vital to the AKP as an avenue for revenue generation and to boost Turkey’s economic activity.

In one high-profile instance in 2020, the Ministry of Tourism and Culture took over the management of Istanbul’s iconic Galata Tower, redirecting tourism revenues to Ankara while awarding a renovation project to an AKP-friendly construction company.

“It’s also done, I think, to limit the cash flow to the municipality,” Esen told Al-Monitor. “I mean Galata Tower, some other areas they’ve taken over, they generate money. So by doing this they are restraining the financial ability of the municipality government to undertake their own projects.”

In districts where members of the pro-Kurd People’s Democratic Party (HDP) won the 2019 municipal elections, the AKP has also overseen the replacement of dozens of elected officials with government-appointed trustees in recent years, arresting or detaining thousands of HDP members on terror-related charges.

Concerning the Princes’ Islands, whose residents tend to vote for the CHP, Oya Ozarslan, a Transparency International board member and founding chair for the organization’s Turkey branch, said last week’s decree was another “infringement of local governments’ rights” that have been seized “one by one and very selectively.”

“It is clear the central government run by the AKP is concerned about losing power after the local elections of 2019 and is trying to seize that power through these decrees, but it is surely an undemocratic way,” Ozarslan told Al-Monitor.

She added that Ankara’s ongoing encroachment on municipal jurisdictions is concentrating power under the central government and further away from constituencies and elected representatives, decreasing accountability for decision-makers who are far removed from local oversight.

Speaking to a parliamentary committee Thursday, Environment and Urbanization Minister Murat Kurum said the Marmara Sea rezoning plan would help the body of water recover from a “sea snot” or a bacterial mucilage bloom that clogged fishing nets this spring and raised concerns for lasting ecological damage in the region.

“Let us speed up the upgrade of waste treatment facilities across Marmara,” Kurum said Thursday. “We need to implement all structural changes within the next three years.”

In a Twitter thread posted Friday, Gurkan Akgun, head of the Istanbul Metropolitan Municipality’s Zoning and Urban Planning Department, criticized the transfer of authority to the Environmental and Urbanization Ministry, saying it sought to override municipal development plans while opening the islands to the overdevelopment and deforestation seen in other parts of Istanbul in recent decades.

The ministry's own plans for the islands remain to be seen, but Esen said the ongoing infringements on municipal jurisdictions by Ankara’s central government will continue to weaken opposition officials, who have few “tools at their disposal” to counter such moves.

“When it’s only a jurisdictional change, it’s difficult to even educate voters that there was such a change,” Esen told Al-Monitor.

Esen said that through such decrees, Ankara’s message could be read as: “If Erdogan wins, or his party wins, that’s fine. But if the opposition wins, then basically the jurisdiction of these governments will be limited to such an extent that the outcome of an election will not amount to much.”