Palestinians in the Jerusalem neighborhood of Sheikh Jarrah are declining a deal that would leave them in their homes for 15 years on the condition that they pay token rent to an Israeli settler organization. 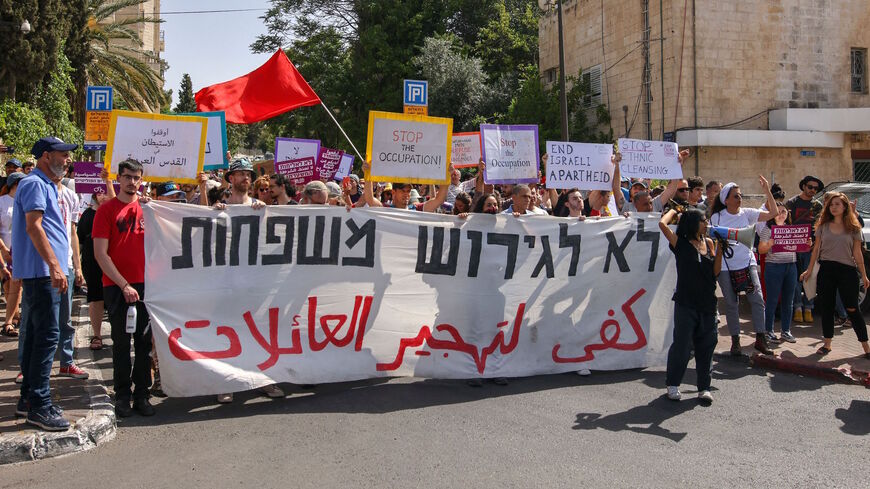 Israeli, Palestinian and foreign activists hold a banner that reads in Arabic and Hebrew "Stop the expulsion of families" during a demonstration against Israeli occupation and settlement activity in the Palestinian territories and East Jerusalem, near the Israeli police checkpoint at the entrance of the Shiekh Jarrah neighborhood, on June 11, 2021. - AHMAD GHARABLI/AFP via Getty Images

The struggle of Palestinian families in the Jerusalem neighborhood of Sheikh Jarrah to not legitimize a settler organization in their midst was emboldened on Nov. 2 when they rejected an Israeli court compromise deal.

The deal suggested by Israel's highest court would allow the four families in the neighborhood to stay in their homes for 15 years and pay a token rent under the guise of protected tenants. For the tenants, of course, the problem is that they will be paying a settler organization that has assumed without proof that they are the owners of the homes built in 1952 by the government of Jordan in agreement with a UN agency.

The long-running case has been a regular source of tension across the occupied territories of East Jerusalem and the West Bank. Protests earlier this year over the case helped trigger an 11-day war between Israel and Palestinian armed groups in Gaza last May.

The Israeli court proposed the deal in October and gave the families until Nov. 2 to decide whether to accept.

The courageous position reflects a new spirit of defiance that is being seen in different parts of the occupied territories. The Palestinians are not allowing the Israeli legal system to pretend to be acting in a legal and just way. In many cases, the Israeli legal system avoids ruling in favor of Palestinians—even if they are clearly innocent. The Israeli courts refuse to rule against the mob-like pressure of the settlers and the government, which is largely controlled by the right wing and the settlers.

The case of Mohammad El Halabi is a reflection of this new courage that Palestinians are displaying, tripping up the well-oiled Israeli legal machine.

Halabi was arrested in 2016 on fabricated charges of having funneled $50 million of humanitarian aid from the organization he worked for in Gaza to Hamas and others. Halabi has insisted on his innocence and rejected 10 plea deals that would have allowed him to be free, instead insisting that he will not admit to any crime he didn’t commit. His case has been in courts for over five and a half years, and the court is unable to rule one way or the other. Halabi is still in jail awaiting a court ruling.

The residents of Sheikh Jarrah know that it is not enough to be right and innocent to succeed. Palestinians in Sheikh Jarrah realize that refusing the compromise solution offered by the court must be based on the belief that they are able to stand up to this combined court/settler pressure with the help of their own people.

One can easily see this in the statement that was issued to announce the rejection of the Sheikh Jarrah deal. “We unanimously rejected the settlement offered by the occupation (Israeli) court,” Muna el-Kurd, one of the Palestinians facing eviction, said at a news conference. The Palestinians argued that instead of submitting to an “unjust” Israeli agreement, they would rely on the “Palestinian street” to raise international awareness of their plight.

“This refusal comes from our faith in the justice of our case and our rights to our homes and homeland,” said Kurd, wearing a jacket embellished with the words “No Fear.” She was flanked by other residents.

Israelis who were hoping to put this case to rest were unhappy with the defiant Palestinian response and in search of reasons behind it. Haaretz's Nir Hasson argued in a Nov. 3 piece that the families were divided but the decision was made “under pressure” from the Palestinian leadership.

“Pressure from the office of Palestinian President Mahmoud Abbas led the families facing eviction in Jerusalem’s Sheikh Jarrah neighborhood to reject a compromise proposed by Israel's Supreme Court that could have prevented the eviction.”

Abbas and the Palestinian leadership have naturally been strong advocates locally and internationally of the rights of all Palestinians, including those of Sheikh Jarrah.

Palestine TV has been running a permanent hashtag in support of the Sheikh Jarrah families, and the Palestinian ambassador to the United Nations, Riyad Mansour, has raised their issue in all of his interventions.

But the Israeli claims appear to belittle the courage of the residents and again paint a picture of poor residents being pressured by a powerful Abbas to reject a compromise.

Sheikh Jarrah residents responded to the Nir Hasson article by saying that from day one they had opposed the offer by the Israeli court and didn’t need to be pressured by anyone to do it.

It is likely that, internally, some Palestinians might have wanted to take the deal just to buy time and not risk losing everything in the hope that things might change in 15 years. Yet the unanimous decision of the community helped keep them strong and united while keeping the pressure on Israel to stop its continuous attempts to depopulate Palestinian communities and replace them with illegal Jewish settlers, a clear violation of international law.