Conservative members of Iran’s parliament are seeking a legal case against former President Hassan Rouhani over his response to the COVID-19 pandemic. 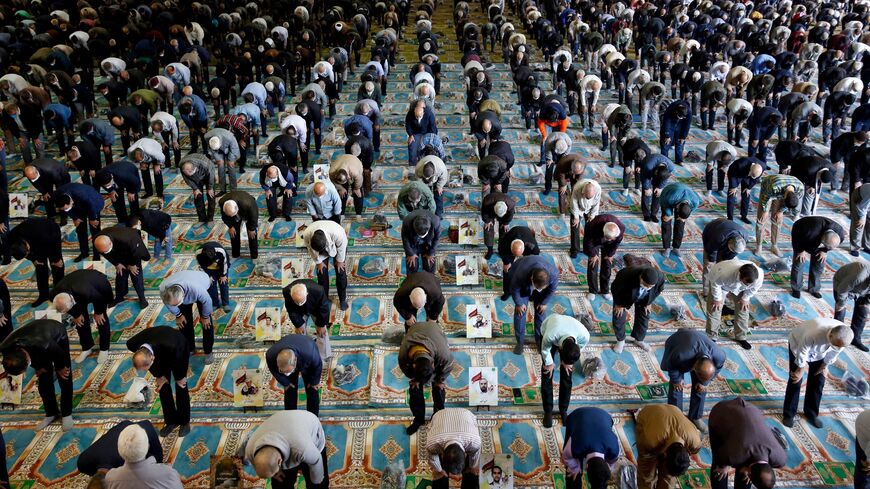 Mask-clad Iranians gather in a mosque in the capital Tehran to perform the Friday prayers, for the first time after authorities eased some restrictions put in place for over a year in a bid to stem the spread of the coronavirus, on Oct. 22, 2021. - AFP via Getty Images

According to Iranian news agencies, 35 members of Iran’s parliament requested that the country’s Justice Minister “address violations by the former president," Hassan Rouhani.

The request was put forward by Mohammad Nabavian, a conservative politician who opposed the nuclear negotiations and a former student of hardline cleric Mohammad Taghi Mesbah Yazdi. The article did not detail which “violations” the lawmakers were seeking prosecution for, but numerous reports in the past have mentioned possible court cases against members of the former administration, including the president.

This is not the first time members of this conservative-led parliament have sought prosecution against Rouhani himself. On Nov. 2, Parliament’s Health Commission issued a report about the Rouhani administration’s response to the COVID pandemic. The report faulted Rouhani’s health ministry for a delay in producing a domestic vaccine, the diplomatic team for not securing foreign vaccines quickly and the president himself for not rolling out the vaccines fast enough.

Iran was one of the first countries to be hit by the coronavirus, likely due to its high rate of travel with China, where the virus first emerged.

Iran has had over 6 million COVID cases and over 128,000 deaths. Some health officials have previously said that the real number of deaths could be twice as high, the discrepancy being the result of World Health Organization rules on only counting deaths who have tested officially positive. A member of Tehran’s task force had also previously accused the government of intentionally lying about COVID deaths.

Regardless of the various faults of Rouhani’s administration, the case to prosecute the former president is certainly political and being led by hardliners. In Iran, prosecuting former members of the president’s administration has almost become a custom, though going after the president directly is something that has not yet happened to such a degree.