Members of the current conservative-led parliament have signed a written warning to President Hassan Rouhani asking that he return Iran’s nuclear program to previous levels before the nuclear deal if US "obstruction" continues. 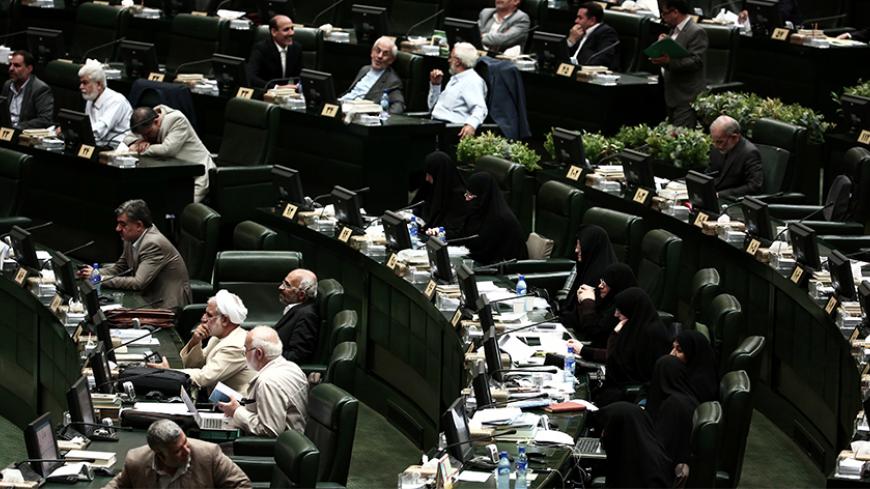 Iranian members of parliament listen to the speech of Foreign Minister Mohammad Javad Zarif defending the Vienna accord, which will see the lifting of sanctions imposed on Iran, in the parliament in Tehran, July 21, 2015. - BEHROUZ MEHRI/AFP/Getty Images
Arash Karami
@@thekarami
May 9, 2016

With the newly elected Iranian parliamentarians set to take their seats by the end of May, more than 100 members of the current conservative-led parliament took one last shot at President Hassan Rouhani’s comprehensive nuclear agreement with the six world powers. In a written warning to the president, the members of parliament said the United States had not fulfilled its promises and asked Rouhani to set a deadline for reconsidering the voluntary steps Iran took in reducing its nuclear program.

The statement by the members of parliament said that while Iran has fulfilled all of its commitments in the nuclear agreement, it accused the United States of “bad promises, sabotage and obstruction” in fulfilling their end of the agreement, specifically in the case of “removing sanctions, banking transactions and blocking money.” While the US has lifted the nuclear-related sanctions on Iran, a number of European and Asian banks have been advised against doing business with Iranian banks due to the remaining US sanctions. US Secretary of State John Kerry is expected to meet with British banks this week to resolve misunderstandings over banking issues. The reference to “blocking money” in the statement refers to a US court’s $2 billion judgment against Iran for the victims of a terrorist bombing in Beirut.

The statement by the members of parliament also read that the “nuclear deal until now has not had any economic achievements for Iran” and asked that if the United States is not able to live up to its fulfillments, Iran should resume its previous nuclear activities within the framework of the Non-Proliferation Treaty. Some of the steps Iran took as part of the nuclear deal were reducing its stockpile of enriched uranium by 98%, reducing its number of centrifuges by two-thirds to approximately 5,000 and removing the core of its heavy water reactor at Arak.

With pro-Rouhani candidates soon to have the most seats in the newly elected parliament, the statement does not pose a problem for the comprehensive nuclear deal. However, the statement does reflect that Rouhani continues to face economic challenges, and since the January implementation of the nuclear deal, and despite oil exports having increased, Iranians are still waiting to see the economic results of the deal.

Conservative newspapers that were opposed to the nuclear deal have now turned their focus to poor economic news. A May 9 article in Vatan-e-Emrooz reported that despite the lifting of sanctions on Iran and the hopes of the administration, major energy corporations did not attend the recent international oil, gas and petrochemical exhibition in Iran. A front-page May 9 article in Kayhan newspaper was headlined, “You filled the country with imported goods then speak of production?!” The article was in reference to comments by Ayatollah Abdollah Javadi-Amoli about how smuggled goods was adding to the unemployment problem facing the country.