Why Iran's hard-liners are ripping into Rouhani over NY visit

Despite the lack of buzz about potential meetings or phone calls with US officials, Iranian President Hassan Rouhani has not been spared from domestic criticism following his latest trip to New York. 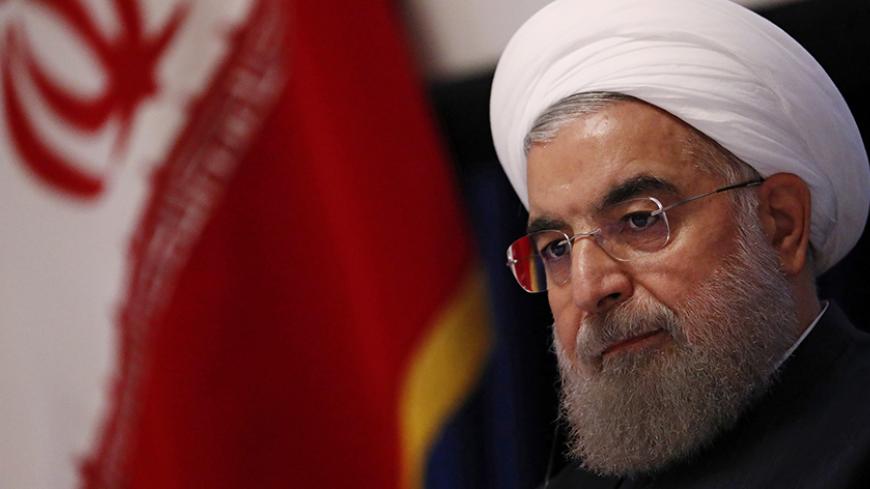 TEHRAN, Iran — President Hassan Rouhani’s trips to New York have always been followed by some controversy inside Iran. On his first trip, which took place in September 2013, he ended up having a phone conversation with the US president. On his third trip, in September 2015, his Foreign Minister Mohammad Javad Zarif shook hands with President Barack Obama.

However, Rouhani’s latest trip to New York on Sept. 20-22, which was his last trip to New York during his first term as the president of Iran, was not controversial. Since Rouhani’s first term is coming to an end and the high-ranking officials of the state are warning that Iran should avoid establishing any form of relations with the United States, Rouhani’s delegation left Tehran without having any unexpected meetings in its agenda.

Indeed, this time around, the reactions to Rouhani’s trip were different. First, the number of empty seats during his speech at the UN General Assembly meeting became a hot topic on Facebook and Twitter. Although Iranians were used to seeing former President Mahmoud Ahmadinejad give speeches to empty chairs, Rouhani had the reputation of talking in front of a sizable audience during his past three trips to New York. Newspaper Vatan-e-Emrooz, which is one of the main mouthpieces of the hard-liners, published an image of Rouhani giving a talk in front of empty chairs on the front page of its Sept. 24 issue, taking up half the page. It also attacked the Reformists and supporters of the administration in a harsh editorial. This newspaper — which usually reserves its harshest criticism for Rouhani’s administration, his foreign policy and particularly the way his team conducted the negotiations — wrote in its editorial, “Reformists, big and small, made a big deal out of the issue of the empty seats when our former president visited the United Nations. However, this does not mean that we should behave the same way now that their administration is faced with the same occurrence. We are not interested in taking cheap shots and talking about the number of empty seats. We evaluate Mr. Rouhani’s performance in New York based on the content of his speech, his meetings with the other representatives and what he has managed to accomplish during his trip.”

But why were so many seats empty? Why was it that this time, unlike previous times, the speech of the Iranian president was not well received? A source in Iran’s Ministry of Foreign Affairs who spoke to Al-Monitor on condition of anonymity said, “The time allocated to each representative is previously determined based on the importance and rank of the speaker. At first, only Mr. Zarif was supposed to give a speech as Iran’s representative, which is why he was scheduled to talk on the third day after all the heads of state had finished their speeches. However, after internal discussions, it was decided that the president himself should go as the head of the Iranian delegation to New York. By this time, however, it was not possible to change the schedule of speeches. In previous years, when Mr. Rouhani gave a speech on the first or the second day, the assembly hall was full. This year, however, his speech was on the third day and by that time, many officials had already left New York.”

Kayhan, another hard-line newspaper in Iran, covered Rouhani’s speech at the UN in its Sept. 24 issue, using a sarcastic headline: “The United States promised to fulfill its obligations.” This newspaper has in the past continuously criticized Rouhani, in its daily editorial section, for trusting the Americans. Its Sept. 24 editorial read, “Mr. Rouhani! When the United States refuses to meet its obligations regarding the Joint Comprehensive Plan of Action, which is, as mentioned, an international agreement — and comes up with a new excuse every day — do you expect them to keep their verbal promises? It has been more than seven months since the agreement was implemented and the United States has only given empty promises in exchange for real advantages it has received from Iran. Almost all of its promises have been left unfulfilled.”

Both Vatan-e-Emrooz and Kayhan devoted the front-page headline of their next issue, on Sept. 25, to Zarif’s Sept. 23 appearance at the Council on Foreign Relations. Under the headline “Nothing Zarif,” Vatan-e-Emrooz highlighted a quote from the foreign minister saying, “Because of the United States breaking its promises, no European bank is willing to work with Iran.” On the same day, Kayhan, under the headline “Zarif finally saw the truth in what the critics were saying,” quoted the foreign minister as saying that the United States has not gone to any length to fulfill its obligations under the nuclear deal.

Meanwhile, attention was also paid to the fact that Rouhani’s trip to New York was quite short and that his delegation was small in number. On Sept. 23, in an editorial titled “The secret behind the empty seats in the presidential plane,” Katayoun Lame'zadeh, a veteran correspondent for the official Islamic Republic News Agency, wrote, “Unlike Ahmadinejad who used to take his relatives and family members with him, Rouhani’s plane was so empty that [accompanying] journalists had four seats each.” Lame’zadeh, who accompanied Rouhani to the UN General Assembly meeting, continued, “Ahmadinejad would sometimes take as many as 200 people with him to New York, 14 of whom were family members, including his daughter-in-law and grandchildren as well as the spouses of his vice presidents and his chief of staff. This is while Rouhani’s wife has never accompanied him on his trips to New York, and neither his chief of staff nor any of his deputies have ever been accompanied by their family members.”

Nonetheless, Rouhani’s opponents were overall once again busy criticizing the administration, with the pretext that the United States has not fulfilled its obligations under the nuclear deal. And if anything, this criticism only seems to increase whenever either Rouhani or Zarif use an international podium to complain about the United States not holding up its own end of the bargain.