Saudi Arabia and its allies are angry with a Lebanese minister over comments he made on the war in Yemen, but the row may actually be about the influence of Iran’s ally Hezbollah in Lebanon. 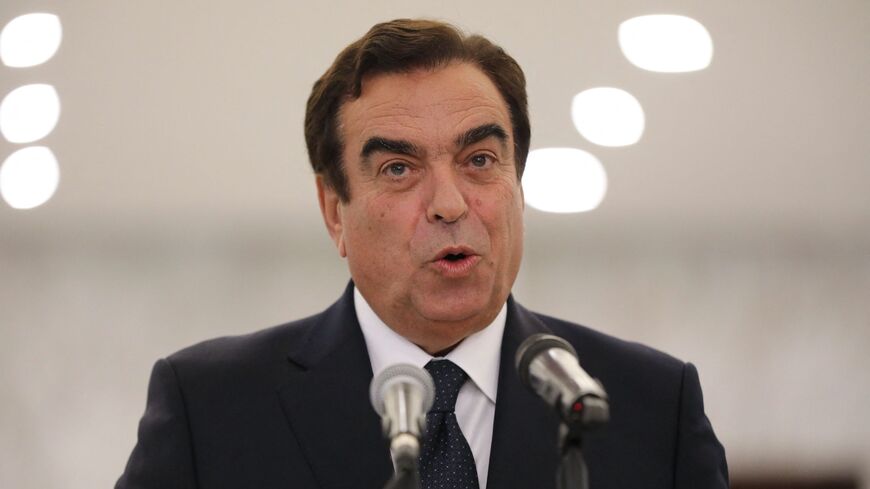 Lebanonese Information Minister George Kordahi speaks during a press conference at the presidential palace in Baabda, east of the capital Beirut, on Sept. 13, 2021. - ANWAR AMRO/AFP via Getty Images

Prime Minister Najib Mikati and President Michel Aoun discussed “a way out of the current crisis and agreed on a road map,” Aoun’s office said in a statement.

In a separate statement, Mikati said, "We are determined to deal with the arising issue of ties with the Kingdom of Saudi Arabia and the sisterly Gulf states.” He called on other government ministers to act in “solidarity” and follow the directions from the cabinet on the issue, the official National News Agency reported.

The crisis began last week, when Al Jazeera aired an interview with Lebanese Information Minister George Kordahi. In the interview, which was taped in August before he assumed his position, Kordahi criticized the Saudi-led military coalition’s actions in Yemen. Saudi Arabia and its Gulf allies took various forms of action against Lebanon in retaliation, including expelling ambassadors and stopping imports. Kordahi said he meant no offense with the remarks.

This is not the first instance of tension between Lebanon and the Gulf. Saudi Arabia also banned Lebanese produce imports in April due to concerns about drug smuggling.

Some Lebanese politicians believe the Gulf is more concerned with the Shiite Islamist paramilitary Hezbollah’s influence in Lebanon than Kordahi’s comments.

“If they just want Hezbollah's head on a plate, we can't give them that,” Foreign Minister Abdallah Bou Habib told Reuters Tuesday.

Hezbollah is supported by Iran and wields tremendous influence in Lebanon, particularly in the south. The group is armed and has considerable support, though many Lebanese oppose it.

From the Lebanese political perspective, the turmoil over Kordahi’s remarks may linger. Mikati called on Kordahi to “to act as dictated by his conscience and take the appropriate position by giving priority to national interest” today, according to the National News Agency. Kordahi reportedly said he would not resign in response, according to the An-Nahar news outlet.