The Kingdom has also halted imports from Lebanon. 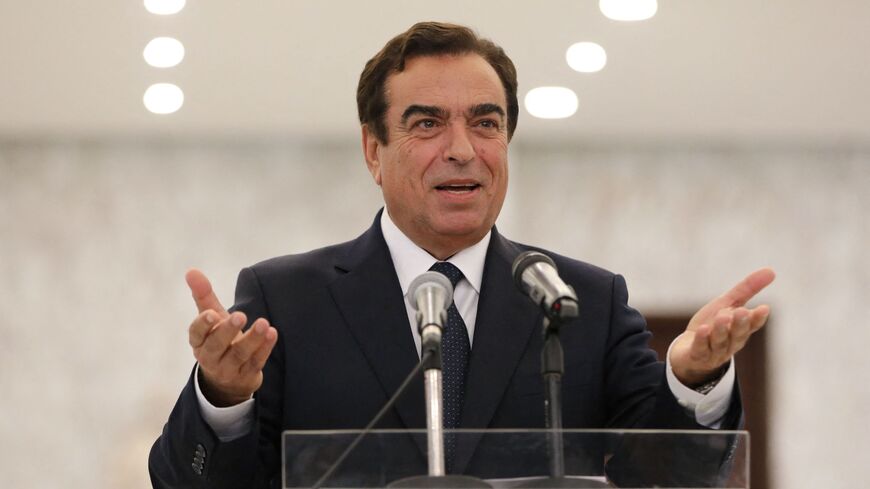 Lebanon's Minister of Information, George Kordahi, speaks during a press conference at the presidential palace in Baabda, east of the capital Beirut, on Sept. 13, 2021. - ANWAR AMRO/AFP via Getty Images

Saudi Arabia expelled Lebanon’s ambassador and said it was ending all imports from the economically troubled Mediterranean country on Friday.

Riyadh has given the ambassador 48 hours to leave the country, Saudi state-run news reported.

The row stems from recorded comments made in August by Lebanon's information minister, George Kordahi, before he took on his current role last month. In the interview, Kordahi criticized the war in Yemen as a dead end.

The recording was publicly revealed earlier this week. In it, Kordahi said Yemen’s Houthi rebels, who have taken over most of the country from the Yemeni government since 2014, were defending themselves against Saudi “aggression.”

Asked in the audio about Houthi drone and missile strikes on Saudi territory from Yemen, Kordahi said, "You need to also look at the damages inflicted on them as a people. They are bombed in their homes, in their houses, in their villages, in their squares, in their funerals."

Saudi Arabia, with the help of the United Arab Emirates, has led a regional military campaign backed by the United States to roll back the Iran-backed Houthis’ advances.

But the Riyadh-led war effort has stalled, further plunging impoverished Yemen into what the United Nations has called the world’s “worst humanitarian catastrophe.”

Kordahi’s comments circulated publicly for the first time on social media on Tuesday, prompting Riyadh and Abu Dhabi to summon the Lebanese ambassadors. Lebanon’s Prime Minister Najib Mikati distanced his government from the comments, saying they were made more than a month before Kordahi took office.

The information minister said on Wednesday that his comments were made as a private citizen, and that he fully supports Lebanon’s policies. He refused to resign, saying his government "cannot remain subject to blackmail."

The UAE called the comments indicative of Lebanon’s “growing distance from its Arab brotherly countries.” Abu Dhabi and Kuwait summoned their Lebanese ambassadors this week to object to the comments. MBC, the Saudi-owned media conglomerate, also said it was pulling service from Lebanon this week.

Since taking office in September, Mitaki has sought to rebuild frayed ties with the Gulf amid tensions within Lebanon between Iran-backed Hezbollah and other groups.

In 2017, Lebanon's then-Prime Minister Saad Hariri unexpectedly resigned from office while visiting Riyadh and appeared unable to leave, leading to allegations from Lebanese leaders that he had been coerced to do so by Saudi leadership in an apparent bid to limit Iran's influence in Lebanon.