The sudden decision by Jordan and the United Arab Emirates to sign a declaration of intent to trade clean electricity for water has produced public opposition despite the fact that Jordan badly needs to add to its water supply due to the increase in population from the regional violence. 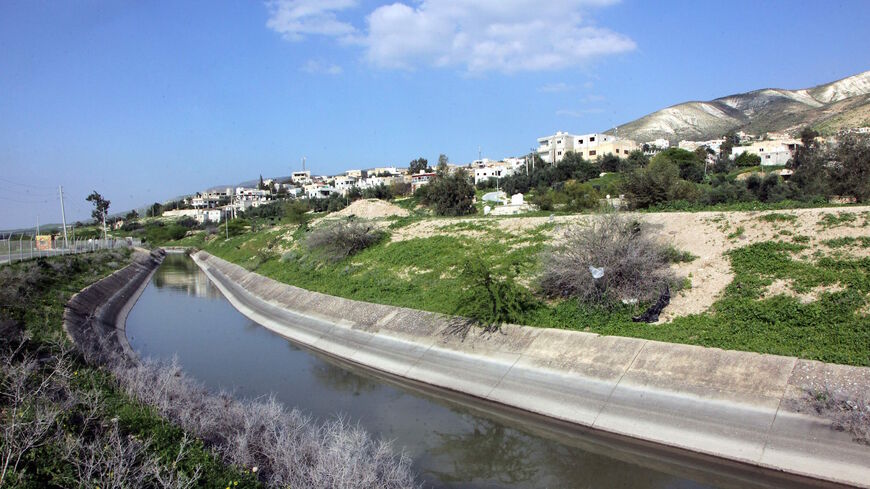 A general view shows a stretch of the King Abdullah Canal near the Jordanian border town of Shuna Shamalia (North Shuna), some four kilometers from the Wadi al-Arab Dam, on March 12, 2018. - AHMAD ABDO/AFP via Getty Images

In normal times, the aim of the recent Jordan-Israel-United Arab Emirates declaration of intent would make sense.

A wealthy Arab Gulf country is willing to contribute to the huge infrastructure of solar panels in the vast, unused Jordanian desert in order to supply a neighboring country — Israel — with clean electricity that will help desalinate and deliver water back to water-poor Jordan.

A seeming no-brainer, but these are not normal times.

The "neighboring country," Israel, is occupying Palestinian Arab lands, and the Gulf partner's normalization policy with Israel has not played well among Jordanians and Palestinians.

The deal makes sense for Jordan on many levels, Abdullah Sawalha, an expert on Israeli affairs, told Al-Monitor.

First, it helps Jordan get back into good relations with the Gulf countries.  Relations had soured after the signing of the Abraham Accords, and Jordan has been looking for ways to engage without paying the high political cost that has come with the normalization deal that was made public in the last year of the Donald Trump administration.

While Trump and Israel’s Benjamin Netanyahu are no longer around, the normalization process doesn’t seem to be slowing down, much to the anger of many Jordanians and Palestinians.

Maamoun Abu Nuwar, a retired Jordanian air force general, told Al-Monitor that the deal reflects weakness on the part of Jordan, which affects national security for Jordanians for the coming generations.

“It is clear [the] water policy has been a failure. Not enough effort was put [into finding] alternatives. Why not try to get water from Syria, especially since Jordan is hosting 1.3 million Syrian refugees?” Abu Nuwar asked, wondering why they shouldn't desalinate the Red Sea instead of being held hostage by Israel for their water supply.

Mazin Qumsiyeh, founder and director of the biodiversity center at Bethlehem University, told Al-Monitor that the idea of this and similar projects has always been to ensure the strengthening of Israel by making countries in the region less self-sufficient and more dependent on Israel.

“It is strengthening colonization and violations of human rights (including apartheid) within Palestine. For countries like Jordan with the Red Sea-Dead Sea canal, it ensures burdening its government with debt that cannot be repaid, and thus making countries follow an indentured servitude paradigm removing sovereignty and taking over other natural resources using 'debt' as a weapon.”

For all the bluster and opposition by Jordanian and Palestinian activists, no official word has come from the Ramallah-based PLO leadership or even from Gaza-based Hamas. Like Jordan, the cash-starving Palestinian government with 200,000 Palestinians working in the UAE can’t afford to anger the UAE by opposing this plan.

Islamic and national forces in Jordan, however, are making their voices heard and planning a major demonstration on Friday in protest of the declaration of intent.

Jordanian officials insist that they are neither abandoning the other options nor depending on this idea to solve their strategic needs.

Mohammad Najjar, Jordan’s water minister, insisted in public statements that the declaration of intent doesn’t cancel work on the national water carrier, which aims to provide drinking water to the tune of 300 cubic meters.

In a press statement, Najjar said Nov. 23 that the declaration of intent is “not connected with the peace agreement and is not obligatory on Jordan.” He also said that while “Jordan is not building its water strategy on this declaration if it is turned into an agreement, it will be presented to the parliament for approval.”

In its official statement, Jordan said that its water situation reached a deficit of 40 million cubic meters in 2021, according to Bashar Batinah, secretary-general of the water authority. He told a parliamentary committee, “The water deficit in the capital has reached 20 cubic meters.”

The declaration of intent will allow Jordan to spend a year or more to study the situation and find out if the project is viable. According to Article 30 of the Jordanian Constitution, any international agreement must be presented to the parliament for approval. Najjar said that if there will be an agreement, it will in fact be presented to parliament.

By signing the declaration, Jordan has succeeded in improving its relations with the UAE and the United States, which is co-sponsoring the plan. The nonbinding agreement has even helped Jordan improve its standing with Israel, even though Jordan’s King Abdullah has yet to meet publicly with the Naftali Bennett administration and is awaiting resolution of the killing of a Jordanian judge at the Israeli side of the King Hussein Bridge and two Jordanians at the Israeli Embassy in Amman, as well as violations of the status quo in Jerusalem, especially Al Aqsa Mosque.