The Syrian government has allowed some Jews of Syrian origin, residing in New York, to visit Damascus. 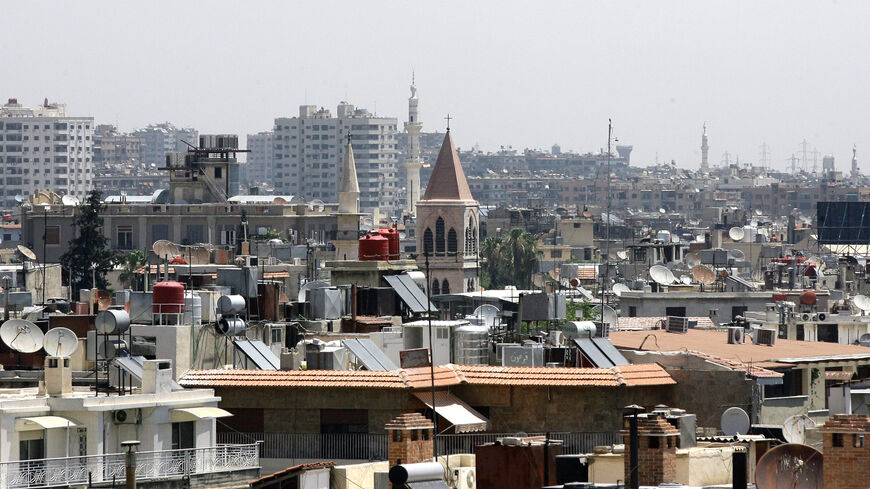 The minarets of mosques and the steeples of churches are seen towering above rooftops in the Syrian capital Damascus, on June 26, 2013. - LOUAI BESHARA/AFP via Getty Images

Israel’s Kan channel reported that the Syrian government allowed six Jewish women and six men, who left Syria decades ago and live in New York, to visit Damascus in early November, within the framework of encouraging more Jews to visit Syria.

Kan’s Arab affairs editor said that the visitors told him that they had applied for medical service with dentists in Damascus, since it costs much less in Syria than in the US.

“The relationship between some Syrian Jews and regime officials who regularly visit the US has not been severed," one of the visitors told Al-Monitor on condition of anonymity. "Some officials visit some Jews in New Jersey … but US law does not allow them to be more than 25 miles away from the UN building. Three years ago, Syrian intelligence invited some Syrian Jews to visit Syria, noting that [Syrian President] Bashar al-Assad is interested in getting closer to Syrian Jews residing in the US; back then, they did not accept the invitation.”

He noted that the visitors wanted to learn more about the synagogues in Damascus, Aleppo, and Qamishli, and to see if it is possible to restore the synagogue in the Jobar area, east of Damascus, which the Syrian Jewish community began collecting funds to renew. “We agreed to visit after the regime pledged to provide us with full protection at all times. We also visited three Syrian Jews who had not emigrated.”

The visitor added, “We were asked to meet with regime officials, but we refused because this visit has personal motives and should not involve politics. We do not want to violate US laws, and we all agreed not to take sides when it comes to the conflicting parties in Syria.”

Makorrishon, a Hebrew newspaper, reported on Nov. 9, “About a month ago, a delegation of US Jews visited Aleppo, northern Syria, and inspected the temple that the opposition restored after the war, after obtaining permits from the Russians.” The newspaper quoted sources in the Syrian community in Israel as saying, “Some Jewish businessmen who previously lived in Syria returned with their families to work in the country with foreign passports. These Jews work there with the approval of the Assad regime.”

Ayman Abdel Nour, head of Syrian Christians for Peace who resides in New York, told Al-Monitor, “The relations between the regime and Syrian Jews have never been severed. When the Brooklyn rabbi died, [former Syrian UN representative] Bashar al-Jaafari and [former Syrian Foreign Minister] Walid al-Moallem sent messages of condolence to the Jewish community. Assad also offered condolences for the death of the head of the Syrian Jewish community. Syrian ambassador Imad Mustafa was attending all the events of Syrian Jews in the US.”

But, Abdel Nour added, “The Jews I am in contact with here told me that they did not forget how the regime treated them between 1970 and 1994; they were prevented from being more than 25 kilometers away from their homes, and they were not allowed to get a job in government institutions. It also forced them to sell their properties for cheap under the supervision of the Military Security Branch before they were allowed to leave Syria. This is why they refuse to accept the regime's calls for rapprochement. The Jews who went back to visit Syria are very few, and they do not represent the Jewish community here.”

The regime’s goal in allowing the visit is to show the progress in Russian-mediated negotiations with Israel, Wael Olwan, a researcher at Jusoor Center for Studies, told Al-Monitor.

Fadel Abdul Ghany, director of the Syrian Network for Human Rights, condemned the violations committed by the Syrian regime against  Jews in Syria. “The regime does not have the right to prevent Syrians from visiting their country. It uses the permission to visit Syria to promote its openness to polish its image and stay in power, even by conceding to Israel as it ceded to Russia and Iran.”

The freedom of Jews to return to Syria should be seen as a right, not a kindness, since in the normal case, any Syrian has the right to return to his country, Abdul Ghany noted. In addition to Judaism, he said, "the regime is also trying to exploit Christian and Muslim clerics alike and employ religion and sects such as the Alawite sect to serve the authoritarian agenda.”

The largest community of Syrian Jews is in Brooklyn, but there are others in different parts of the US and the occupied Palestinian territories, according to The Wall Street Journal. Some American Jewish leaders, including the President of the World Jewish Congress, Ron Lauder, maintained personal relations with Assad and his father, Hafez al-Assad, before him.

According to the book Ottoman Administration in the Province of Syria, 1864-1914, more than 30,000 Jews lived in Damascus in the 1950s, but most of them left after the Six-Day War in 1967. Today, a Damascene Jewish minority lives there along with some Palestinians and Iranians. The Jewish quarter used to include 12 schools and ten synagogues.