The Belgian decision to label West Bank settlement products was made as Deputy Foreign Minister Idan Roll is visiting the country and ahead of a scheduled meeting with Belgian Foreign Minister Sophie Wilmes. 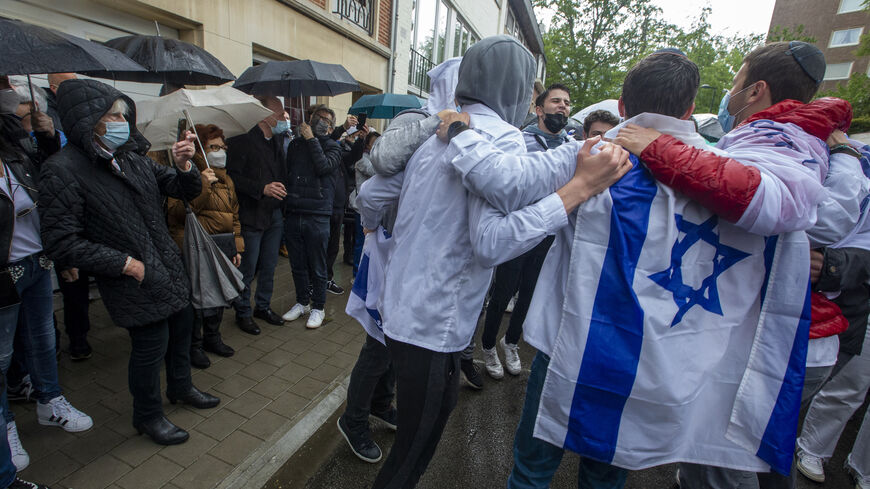 A pro-Israel demonstration is held at the Israeli Embassy in Brussels, May 16, 2021. - NICOLAS MAETERLINCK/BELGA MAG/AFP via Getty Images

Deputy Foreign Minister Idan Roll cancelled his meetings in Brussels scheduled for today with Belgian Foreign Minister Sophie Wilmes and with Belgian parliamentarians. Explaining the cancellation, Roll tweeted, "The Belgian government's decision to label products from Judea and Samaria strengthens extremists, does not help promote peace in the region, and shows Belgium as not contributing to regional stability."

A statement by Israel’s Foreign Ministry read, "The decision to label products harms both Israelis and Palestinians and goes against the Israeli government's policy focused on improving the lives of Palestinians and strengthening the Palestinian Authority and with improving Israel's relations with other European countries."

Roll and the Foreign Ministry were referring to reports about Belgium planning to label products of West Bank settlements as not made in Israel. Over the years, the issue of labeling settlement products has become a thorn in Israel’s relations with European Union member states. A French court ruled in 2018 against forcing West Bank wine producer Psagot to label its bottles as made in Israeli settlements. But a year later, the European Union’s court ruled in favor of requiring such labeling. Still, so far most European Union members have been slow to follow the guidelines.

Roll heard of the Belgian plan while on official visit to Belgium and Luxembourg, shortly after he visited the Jewish museum in Brussels that suffered a terrible terror attack in 2014. The Belgium move also came while Foreign Minister Yair Lapid announced he was planning to visit the United Kingdom and France next week in an effort to deepen Israel’s diplomatic relations with those countries and with the European Union. Jerusalem now fears that Belgium might set a precedent for other European countries.

Still, Jerusalem should not have been surprised. When the current Belgian government was established, some of the participating parties demanded a clear policy on the Israeli-Palestinian conflict in general and settlement products in particular. Since May, senior officials from the Belgian ministries of foreign affairs, finance and economy have been meeting to that end. The Belgian government also decided that any future agreement between Belgium and Israel will include a clause stipulating it is not valid in the West Bank and east Jerusalem.

The Belgian decision may also reflect growing concerns in Europe over Israel expanding West Bank settlements. At a Joint Stakeout in the UN headquarters Nov. 8, European members of the UN Security Council Estonia, France and Ireland, joined by Norway and Albania, called upon the Israeli government to "halt settlement construction in the West Bank and east Jerusalem, including E1 and Givat Hamatos and not to proceed with the tenders for the construction of more than 1,300 housing units and plans for construction of nearly 3,000 housing units in Israeli settlements in the occupied Palestinian territory announced on 24 and 27 Oct. 2021." More so, the Belgian decision could reflect European concerns over the Palestinian issue being sidelined in contacts between Israeli diplomats and officials and their European counterparts.