Is it from Israel or Palestine? EU labeling guidelines spur more controversy

Congress — and Israel — say new European labeling guidelines are an anti-Semitic ploy; the EU says they’re in line with 15 years of trade law. 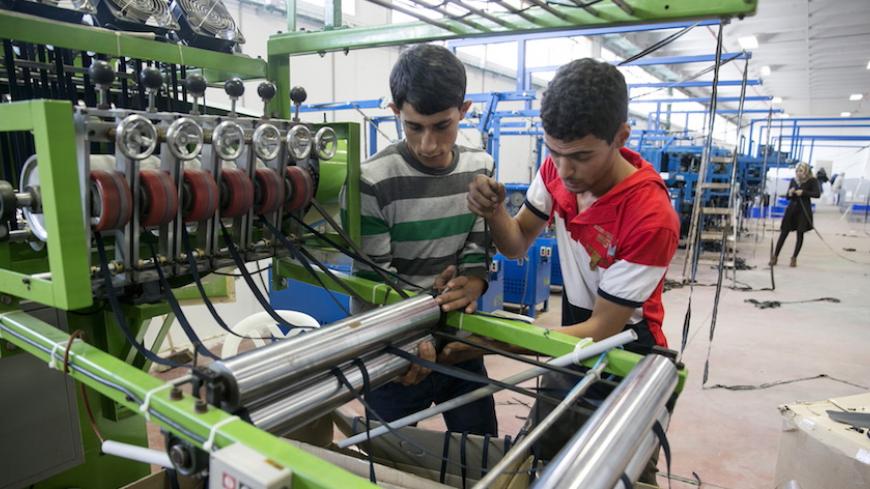 Palestinians work at a textile factory in the Industrial Park of the West Bank Jewish settlement of Barkan, southwest of Nablus, Nov. 8, 2015. - REUTERS/Baz Ratner

The European Union’s decision to clearly label products from outside Israel’s pre-1967 borders is laying bare a fundamental difference with the United States over how to stop the spread of Jewish settlements.

The Israeli government and its allies in Congress pilloried the new guidelines released Nov. 11 as a discriminatory assault that borders on anti-Semitism. The EU for its part insists that the guidelines are nothing more than a technical clarification to 15 years of trade relations with Israel.

The spat highlights the chasm between the EU and the United States over how best to pressure Israel over its expansion into the territory of a would-be Palestinian state, with potentially deep ramifications for bilateral relations.

“Future administrations should vigorously oppose [the guidelines] through legal challenges to this politically motivated barrier to trade,” Sen. Marco Rubio, R-Fla., a top-tier Republican candidate for president, said in a statement. “This should also be treated as a significant problem in US-EU relations.”

Lawmakers first put the EU on notice in April when a key panel unanimously voted to add language to a US-EU trade bill warning against any effort to boycott “Israel or … Israeli-controlled territories.” And on Nov. 9, presidential candidate Ted Cruz, R-Texas, and Sen. Kirsten Gillibrand, D-N.Y., sent a letter with 34 other senators to EU foreign policy chief Federica Mogherini warning her to reject the guidelines.

“We are also deeply concerned that enacting this policy would lead to the broader boycott of Israel,” they wrote. “Differentiating between products made by Israeli companies creates a troubling precedent that could eventually lead to the type of activities that the [trade bill] provisions aim to address.”

The EU counters that it has in fact been differentiating between Israel and its settlements for more than a decade, with nary a peep from Congress. The new guidelines, the European Commission asserts, merely ensure that European consumers aren’t being misled about what they’re buying.

The guidelines have caused a furor in part because of their timing, coming amid a wave of Palestinian violence and a concerted effort by pro-Israel backers in the United States to stop the spread of the boycott, divestment and sanctions (BDS) movement. Critics see the guidelines as nothing more than a sop to those who would boycott Israel, even though the EU insists that’s not their goal.

“The labeling of products of the Jewish state by the European Union brings back dark memories,” Prime Minister Benjamin Netanyahu said in a message from Washington. “Europe should be ashamed of itself.”

He went on to denounce a “double standard” when other disputed territories don’t get the same level of scrutiny. The Foreign Ministry said it was suspending its dialogue with the EU on Palestinian and human rights issues.

The EU insists that Israel is a case apart, and argues that other disputed territories — notably the Western Sahara — are not considered illegally occupied under international law; imports from the Russian-occupied Crimea Peninsula for their part are banned. A European Parliament report in June, however, argued that the EU did not have a consistent policy with regard to the occupied territories, providing fodder for critics of the new guidelines.

A few voices on the Israeli left have defended the labeling.

“It is the right decision to label the products from the settlements,” said Knesset member Issawi Frej of the Meretz Party. “It will allow European consumers who do not want to boycott Israel to buy Israeli products without fear of financing the settlements and the occupation.”

Lost in the rhetoric is that the guidelines are a logical corollary to the EU-Israel Association Agreement, which went into effect in 2000. That trade deal does not extend to Israeli settlements, which the EU considers to be illegally occupied under international law. EU bureaucrats tasked with implementing the trade pact have in fact been labeling products from the territories since 2003 — just not in a way that consumers could easily understand.

In 2010, the EU court in Luxembourg ruled that Israeli settlers were indeed barred from enjoying the trade deal’s perks. Europe does import Israeli goods from the West Bank, but their value is dwarfed by the record 30 billion euro ($32 billion) in trade with Israel in 2014, according to a fact sheet from the European Commission.

Israel has long balked at the discriminatory policy, and had worked out a deal whereby it would specify the geographic location of its products but without saying they were from “settlements.” A number of European countries with strong BDS movements, however, have been pressing for a more robust policy for the past couple of years, arguing that European consumers could not easily tell which side of the pre-1967 line certain locations are located.

The US, by contrast, treats West Bank exports as coming from Israel for duty-free purposes under its 1985 Free Trade Agreement with Israel, America’s first. But the US does not recognize Israeli sovereignty over the post-1967 territories, and also demands that products from Gaza and the West Bank be labeled as such — without requiring the use of the word "settlements," however.

The disparate treatment of Israel in US and EU trade pacts is but a symptom of much broader policy differences, fueled in part by domestic political considerations. While the EU has not hesitated to call Israeli settlements “illegal” — France has even threatened to take the issue to the United Nations — the United States has taken a softer approach, with the Obama administration merely calling them “illegitimate” in recent years.

US patience, however, may be wearing thin. After Congress passed its trade bill over the summer, State Department spokesman John Kirby accused Congress of "conflating" Israel and Israeli-controlled territories — even though that’s largely what the US-Israel trade pact has done for 30 years.

“The US government,” Kirby told reporters June 30, “has never defended or supported Israeli settlements and activity associated with them and, by extension, does not pursue policies or activities that would legitimize them.”

Editor's note: This story was updated to clarify US labeling policy for imports from the West Bank and Gaza.