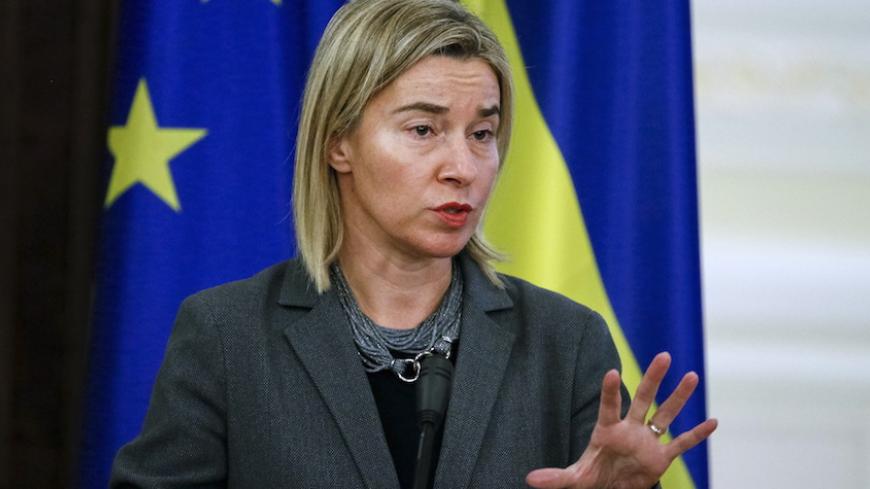 The European Union’s top diplomat has made it clear to Congress that the EU has no intention of reversing its policy of labeling Israeli settlement goods.

Congressional accusations that the EU policy is akin to a boycott of Israel are “not only misleading, but also unjustified,” EU foreign policy chief Federica Mogherini wrote to House and Senate lawmakers in identical letters obtained by Al-Monitor. The letters, dated Dec. 23, stress that “there is no EU boycott of any product” and that trade between the EU and Israel has doubled over the past two decades.

“Allow me first to state in the clearest possible terms that the European Union is a friend of Israel and has never advocated or condoned a boycott of Israel, of its citizens, of its companies or of its products,” Mogherini wrote.

The high representative for foreign affairs goes on to assure lawmakers that she has discussed the EU’s concerns about continued Israeli settlement construction with Prime Minister Benjamin Netanyahu and remains “confident that the EU and Israel will continue to have excellent relations.”

Mogherini’s missives are a direct response to November letters from pro-Israel lawmakers in the House and Senate that compared the labeling policy to an illegal, “de facto” boycott of Israel. The congressional letters were spearheaded by Republican presidential candidate and Texas Sen. Ted Cruz and New York Democratic Sen. Kirsten Gillibrand, and by Republican Reps. Doug Lamborn of Colorado and Randy Weber of Texas.

“Faced with this reality of escalating anti-Semitism,” Lamborn and 35 of his House colleagues wrote Nov. 10, “we believe it would be ill-advised to endorse a policy that likewise singles out Israel and holds it to different standards than any other country.”

The Senate letter, for its part, opens by stating the lawmakers’ “unequivocal opposition” to the EU labeling guidelines.

While they were eager to trumpet their opposition to the EU policy, the lawmakers have not been nearly as keen to showcase their inability to effect any change, as evidenced by the month-old response. Cruz and Lamborn did not immediately respond to requests for comment about possible next steps.

The exchange is but the latest in a series of skirmishes as Israel and its allies push back against the Palestinians’ boycott, divestment and sanctions campaign. Already in June, Congress passed trade legislation that conditions a potential US-EU trade pact on Europe not discriminating against Israel, prompting the Obama administration to reiterate that it, too, has concerns with the settlements.

In her response, Mogherini largely repeats EU justifications for its labeling policy. She says it simply seeks to codify existing EU trade law that covers Israel proper but not its settlements, which the EU and a UN panel consider to be illegal.

“The EU,” she writes, “has decided to make the necessary distinction between Israeli settlements in the occupied territories on the one hand and Israel within its pre-1967 borders on the other, which has allowed the development of our bilateral relations within the framework of the 1995 Association Agreement.”

Mogherini’s response does not address accusations that the EU policy could fuel anti-Semitism. Nor does she respond to accusations that it is discriminatory, since it singles out Israel while the EU does not require special labeling for Moroccan products from the Western Sahara, for example.

She does, however, counter the congressional argument that labeling settlements “prejudges” the outcome of negotiations between the Israelis and the Palestinians by arguing that, in fact, the opposite is true.

“On the contrary, the guidelines enable the continued access to European markets of products from both Israel and Israeli settlements in territories occupied by Israel since 1967, but requires a distinction between them in terms of ensuring a correct indication of origin of those products,” Mogherini wrote.

“To do otherwise might be seen as prejudging the outcome of future negotiations on borders, which would be contrary to both European and US policy.”