In a discussion with Al-Monitor, Charles Shamas, a Palestinian entrepreneur involved in exporting Palestinian products to Europe, traced the path to the European Union guidelines for labeling settlement products. 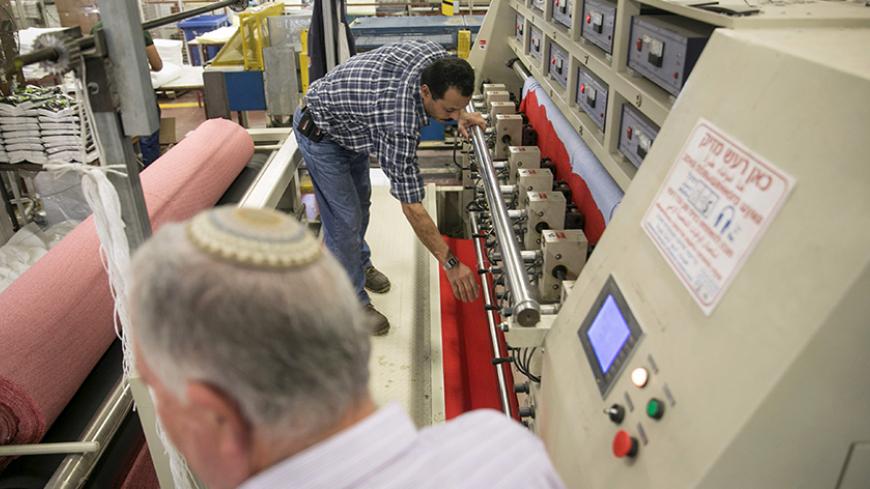 A Palestinian man works at a textile factory in the West Bank Jewish settlement of Barkan, southwest of Nablus, Nov. 8, 2015. Few issues have caused more friction between Israel and the European Union than the EU plans to impose labeling on goods produced in Jewish settlements on occupied lands. - REUTERS/Baz Ratner

The European Commission's Nov. 11 “interpretive notice” clarifying “the application of existing [European] Union legislation on indication of origin of products to products originating in Israeli-occupied territories” was not arrived at quickly or easily. In fact, it dates back to the mid-1980s.

In 1986, an issue emerged involving the legalities of how a Palestinian manufacturer in Ramallah could export its products to the European Economic Community (EEC), the EU's predecessor. In 1995, the question arose as to why EU customs officials were failing to collect duties on Israeli settlement products because the settlements were not considered part of Israel, which had a preferential trade agreement with the EU. In 2012, discussion revolved around whether EU law permitted EU-funded support to activities and operations in settlements. The product labeling issue emerged as one of how the origin of items produced in Israeli settlements should be accurately identified — as all products must be under EU law — so as not to mislead European consumers.

Years of quiet and persistent action and advocacy dating back to 1984 paved the way for today's notice. Around that time, some Palestinians had begun thinking about the value of exports. Among them was Charles Shamas, a lingerie manufacturer in Ramallah who approached the EEC about exporting his products to Europe. Now a senior partner with the Ramallah-based Mattin Group, Shamas spoke at length with Al-Monitor about the progression leading to the current labeling guidelines.

Shamas told the Europeans that he wanted to know how Palestinian producers in the West Bank and Gaza Strip could participate in the system of preferential trade that the EEC was constructing around the Mediterranean basin. Since the EEC did not consider the occupied Palestinian territories to be part of the State of Israel, Shamas also needed to know how the origin of his lingerie should be declared and labeled in accordance with EEC provisions. His questions were answered in 1986, when the EEC Council of Ministers adopted a regulation authorizing the Arab Chambers of Commerce in Gaza and the West Bank, including East Jerusalem, to certify export products originating in the occupied Palestinian territories.

Shamas, also a cofounder of the Palestinian trade promotion organization and Al-Haq, the leading Palestinian human rights organization, explained the depth of the problems over some 30 years. “Since 1986, virtually all of the major political crises between Israel and the EU have erupted when the EU was moved to clarify what its own law requires and to correct the law’s deficient implementation.” Today’s drama around the labeling issue is more of the same.

Israeli Prime Minister Benjamin Netanyahu discussed the November labeling guidelines, which Israel has called a “discriminatory step,” when he met Nov. 30 with Federica Mogherini, EU high representative for foreign affairs and security policy, at the Paris climate summit. The preceding day, Israeli officials had suspended diplomatic dialogue on the peace process because of the guidelines. It was unclear how long the suspension would last or whether it was merely a public relations stunt.

Israeli claims of discrimination appear to ignore other instances of the EU applying economic restrictions, such as those on trade with Crimean companies after Russia annexed the territory in March 2014. The EU’s official website states, “As part of the EU's non-recognition policy of the illegal annexation of Crimea and Sevastopol, the EU has imposed substantial restrictions on economic exchanges with the territory. These include: a ban on imports of goods originating in Crimea or Sevastopol unless they have Ukrainian certificates.”

Shamas said that the European Commission’s action on labeling should not be interpreted as a politically motivated move or diplomatic tactic. “The EU authorities were asked to clarify their own law and implement it. Properly speaking, there was no political decision to be taken. The policy was decided when the law was made,” he said.

According to Shamas, the labeling guidelines attempt to correct the EU’s failure to effectively implement its own legislation after numerous complaints by consumers and parliamentarians about products that they knew were made in Israeli settlements but were labeled “Made in Israel.” “As the problem festered, the pressure to fix it mounted. The labeling notice itself stated the notice does not create any new legislative rules,” said Shamas.

The United Kingdom had gotten the ball rolling on Dec. 10, 2009, when it issued “Technical Advice: Labelling of Produce Grown in the Occupied Palestinian Territories.” In 2010, the European Parliament formally called on the European Commission “to produce guidance on the labeling of goods from the Occupied Palestinian Territories, ensuring that Israeli settlement products are clearly distinguished from Israeli goods and Palestinian products.” In 2012, Denmark issued voluntary labeling guidelines to allow supermarkets to require the labeling of settlement goods. In 2014, Belgium followed suit.

“But everybody was waiting for the commission to act,” Shamas said. “It was the only institutional player that could resolve the confusion and put an end to the politicized debate about labeling within the EU.” The guidelines merely clarify that settlement products cannot be labeled products of Israel. As Shamas described it, “The EU is just getting its own house in order.”

When entities like the EU knowingly engage with activities involving serious breaches of international law or permit their nationals to do so, it can significantly affect the intensity of such breaches and the likelihood of their continuation. Shamas remarked, “What often matters most to governments is how their own internal law may actually require them to assess such activities and situations and then limit interactions with them.”

When the EU was moved to address questions about its rules and regulations, the requirements of its own law gave new teeth to international law. Now people are asking whether even importing settlement products is consistent with EU policy and legislation.

The Israeli Knesset's Committee of Economic Affairs held a meeting Dec. 7 on the EU labeling notice. Ohad Cohen, representing the Ministry of Economic Affairs, was quoted in the press as saying that the exports in question amount to no more than $50 million, while a representative for settlers in the Jordan Valley put the figure at $130 million, or 500 million shekels.

For most Israelis and Palestinians, as well as Europeans, money is not the issue. The labeling guidelines redraw the clear line established under international law between Israel’s proper settlements and its illegal ones.