In a first official visit to Rabat, Defense Minister Benny Gantz signed a landmark memorandum of understanding with his Moroccan counterpart Abdellatif Loudiyi. 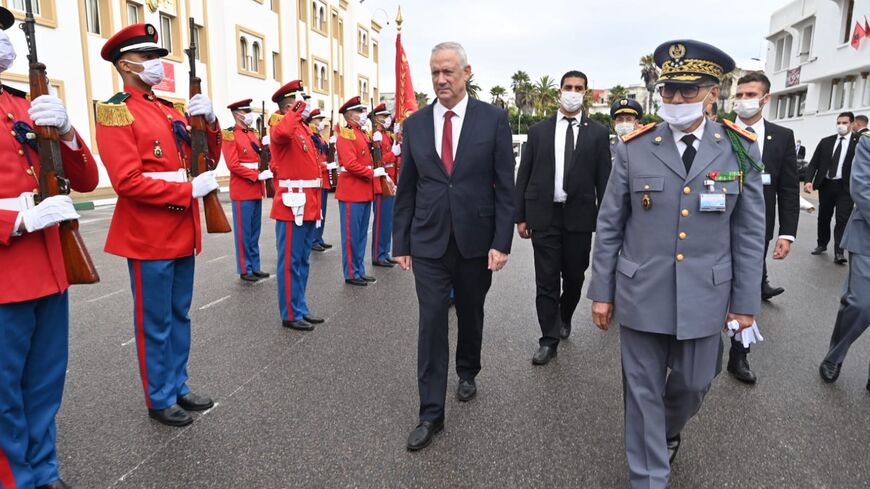 Defense Minister Benny Gantz signed a memorandum of understanding Nov. 24 with his Moroccan counterpart Abdellatif Loudiyi in Rabat, formalizing security relations between the two countries. The document should enable both countries' defense establishments to communicate more easily with one another and share intelligence. In the past, security dialogue was only possible through their respective intelligence agencies.

It is the first such agreement Israel has ever signed with an Arab state. It will specifically facilitate intelligence cooperation, links between security industries, the sale of Israeli weapons to Morocco and joint military drills.

A statement issued by Israel’s Defense Ministry said the document will “allow the beginning of official security cooperation between the two [countries]. The agreement includes formalizing intelligence-sharing and will allow for ties between their defense industries, defense procurement and joint exercises.”

The signing ceremony took place at the Moroccan Foreign Ministry, with military attaches and two Israeli parliament members attending. Gantz said afterward, “We have just now signed an agreement for military cooperation — with all that that implies — with the nation of Morocco. This is a highly significant event that will allow us to enter into joint projects and allow Israeli [defense] exports to here. I think the ties between Morocco and Israel need to continue to get closer, to continue to develop and expand, and I am glad that we have a part to play in that.”

Gantz arrived in Rabat last night. Before the signing ceremony, Gantz paid his respects at the tomb of Mohamed V, the grandfather of Moroccan King Mohammed VI. Gantz also met with Moroccan Chief of Staff Abdelfattah Louarak. He is scheduled to also visit the Talmud Torah synagogue in Rabat before returning to Israel tomorrow evening.

Foreign Minister Yair Lapid was the first Israeli official to visit Rabat since the 2020 signature of the Abraham Accords normalizing ties between Israel, the Emirates, Bahrain and Morocco. On Aug. 11, Lapid met extensively with Moroccan Foreign Minister Nasser Bourita, and on Aug. 12 inaugurated Israel’s liaison office in Rabat.

Rabat agreed to join the Abraham Accords after former US President Donald Trump agreed that the United States would recognize Moroccan sovereignty over the disputed Western Sahara region. Morocco established diplomatic ties with Israel shortly after the Oslo Accords, but severed them in 2000 when the second intifada broke out. Since then, diplomatic missions in both countries were closed, but Israeli tourists were allowed to visit Morocco. Hundreds of thousands of Israelis are of Moroccan origin.

Over the years, Israel and Morocco maintained some security contacts, but relations were kept discrete. Reports earlier this month revealed that Morocco is interested in purchasing Israel’s Iron Dome missile defense system, though such a deal seems unlikely to be signed in the near future.

The official statements about Gantz’ visit did not address the Israeli Pegasus spyware affair, which has strained diplomatic relations between Rabat and Paris and between Paris and Jerusalem. Rabat is alleged to have used the NSO software against French President Emmanuel Macron, though the allegation is categorically denied by Morocco. Over the past few weeks, Israeli diplomacy made considerable efforts to find a solution to the issue and mend ties with France. These efforts included visits in Paris by national security adviser Eyal Hulata. The Nov. 21 decision by the Israeli cabinet to nominate Yael German as the country’s next ambassador to Paris and Lapid's expected Nov. 30 visit to Paris may signal that the Pegasus affair is about to be resolved.