Defense Minister Benny Gantz signed this week in Rabat a landmark cooperation agreement with Morocco — the first such agreement signed by Israel with an Arab state. 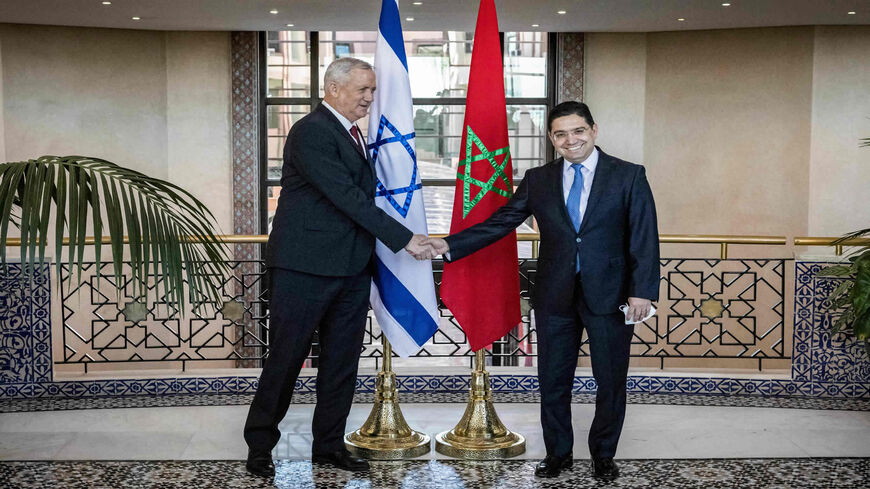 For Israeli Defense Minister Lt. Gen. (Res.) Benny Gantz, the height of his historic visit to Morocco this week was a tour of the Royal Moroccan Armed Forces base housing the First Infantry Airborne Brigade. It took him back some 40 years to one of his first military postings as commander of the vaunted Israeli Paratroopers Brigade, whose maroon beret he sported on his epaulets to the top post of the Israel Defense Forces (IDF). The Moroccans welcomed Gantz at the base with great honors, and he himself did not hide his emotions.

An associate of Gantz quoted on condition of anonymity what the minister wrote in the Moroccan unit’s visitors’ log, “Once a paratrooper, always a paratrooper,” adding, “As a former commander of the Israeli Paratroopers Brigade and IDF’s chief of staff, it is a personal honor to visit the First Infantry Airborne Brigade of the Royal Armed Forces. Today we ‘leap together,’ united in our mission to advance a common vision of peace and security for our nations, the region, the world.”

Gantz’s use of the words “leap together,” echoing the rallying cry for paratroopers the world over as they take their step out the plane’s door, is a fitting analogy for his two-day visit to Morocco. He was the first Israeli defense minister to ever pay a public visit to the country and publicly sign a defense cooperation agreement with an Arab Muslim state. Several Arab and Muslim states have maintained over the years security ties and some forms of cooperation with Israel, but almost always in secret. This week, in Morocco, the relationship was out in the open with full fanfare, echoing the normalization agreement reached between the two countries just over a year ago. It was clearly a diplomatic statement, but also a security one.

No, the Moroccans have not converted to Zionism, but they have apparently realized that ties with Jerusalem are key to the success of the battle over the Western Sahara and to preserving US recognition of their sovereignty over that disputed territory, as declared by former President Donald Trump in return for full Moroccan diplomatic relations with Israel. Gantz’s visit highlighted not only ties with Jerusalem, Israel’s official capital, but also ties with Tel Aviv, Israel’s main defense hub.

Gantz was accorded a welcome fit for heads of state. His photo graced the front pages of most local newspapers, magazines and websites; he penned an op-ed piece for the French-language magazine L’Observateur Du Maroc and the Arabic newspaper Al Ahdath Al Maghribia. He was received with full military honors at his various stops.

Gantz arrived in Rabat at the head of a large contingent of uniformed officers, and perhaps more importantly intelligence officials and experts. He met with Defense Minister Abdellatif Loudiyi, Foreign Minister Nasser Bourita, Moroccan military Chief Abdelfattah Louarak, director of Morocco’s DGED external intelligence agency and other top defense officials. The memorandum of understanding he signed launches a series of security and intelligence cooperation projects and a race by Israel’s defense industries for lucrative contracts with the Moroccans, who told Gantz they planned to buy Israeli-developed weapons worth hundreds of millions of dollars.

An embarrassing moment occurred toward the end of the visit when Israel, with strange timing, issued a new list of countries to which Israeli companies are permitted to sell cyberware. Morocco was not on the list. It had been excluded by Israel’s arms export control agency along with dozens of other countries following explosive revelations about the use various regimes had made of spyware sold by Israel's NSO Group.

Morocco’s omission is likely to be reversed soon, restoring it to the list following several regulatory changes in the pipeline. Israeli developed cyberspyware is a key tool in Israeli diplomatic efforts to expand the country’s circle of influence and convince reluctant Arab and/or Muslim states to establish or upgrade official ties with the Jewish state. The Moroccans desperately need intelligence information, unmanned aerial vehicles and air defense systems including protection against explosives-carrying battlefield drones. Israel might even agree at some future stage to sell Morocco its anti-missile Iron Dome interception system. The Moroccans also need military training and aid.

Morocco has been conducting ties with Israel for decades, almost always under the radar. Former Prime Minister Ehud Barak, along with the late Minister for Regional Development Shimon Peres, participated in the 1999 funeral of Moroccan King Hassan II. Both sides’ intelligence agencies have also cooperated for years. This is all out in the open now, as Israel gradually steps into American shoes as a regional power that can be relied on to confront what Gantz and his Moroccan colleagues dubbed “Iranian subversion.”

Iran’s name came up a number of times during Gantz’s various meetings. Morocco severed ties with Iran in 2018, accusing it of backing the Algerian-backed Polisario movement seeking independence in Western Sahara. As of this week, Israel is officially on Morocco’s side as will soon be manifested in the form of significant aid in weapons, training and intelligence (including cyberwarfare).

Morocco hopes its romance with Israel will silence calls in Washington to reconsider Trump’s recognition of Moroccan sovereignty over Western Sahara. The administration has announced it would not revoke the decision, which still arouses criticism in Washington given Morocco’s continued refusal to enter into negotiations with the Polisario movement. Morocco hopes to overcome this obstacle with the help of Israel’s good offices in the US capital.

As for the struggle with Iran, Gantz continued to distinguish himself from Prime Minister Naftali Bennett on this issue, even while in Morocco. Contrary to Bennett’s combative speech Nov. 23 hinting at disagreements with the United States and declaring that Israel would not be bound by any agreement with Iran should one be signed, Gantz adhered to his moderate position, refusing to air Israeli disagreements with the United States and saying he would only share his views with the Americans in private.

Gantz’s view, which is shared by Foreign Minister Yair Lapid, does not fit Bennett’s position, especially as far as its public dimension is concerned. Israel’s diplomatic-defense agencies are all on the same page: An interim agreement of the kind being reported in recent days would be a disaster and would not be binding on Israel. Bennett decided to air his view in public this week. Gantz and Lapid still believe this public airing is unnecessary. “If we really want to have any influence, we have to talk behind closed not open doors,” a source close to Gantz told Al-Monitor this week on condition of anonymity.