Iraq has brought back over 400 of its citizens who chose repatriation after weeks stranded in dire conditions on the Belarus border and failed attempts to enter the EU. 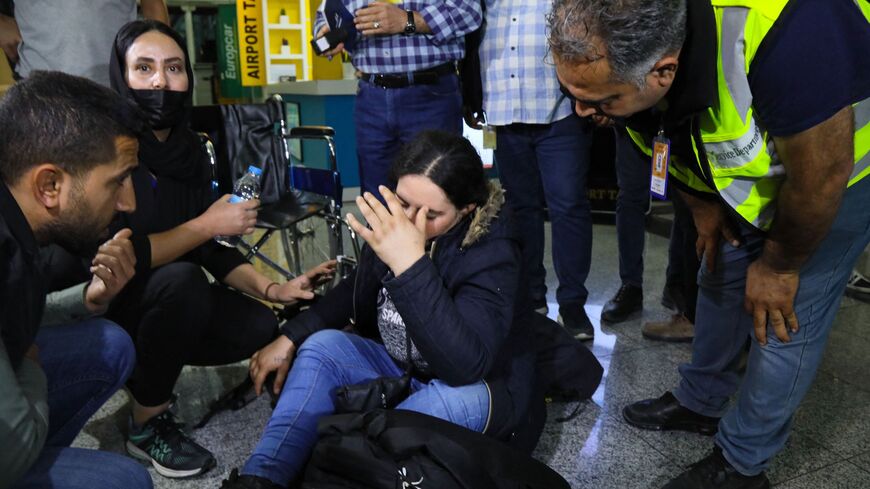 An Iraqi migrant feels unwell upon her arrival at the airport in Arbil, the capital of Iraq's northern autonomous Kurdish region, after being flown home from the Belarusian capital Minsk, on Nov. 18, 2021. - SAFIN HAMED/AFP via Getty Images

ERBIL, Iraq — The international media has been awash for weeks in photos and videos of Iraqis and other would-be migrants suffering from bitterly cold winter conditions in a forested area along the Belarus border with Poland.

Most have been stranded for weeks after unsuccessful attempts to cross the border into Poland on their way to other European countries.

The first humanitarian repatriation flight offered by the Iraqi government from Minsk brought over 400 citizens, the vast majority of them from the Kurdish ethic group, back on the evening of Nov. 18. Registration for those wanting to return had begun a week before.

Thousands of migrants remain on the Belarus border, with estimates ranging between 3,000 and 20,000. The Kurdistan Region of Iraq cited the higher figure in a press release issued on Thursday.

A large proportion of these people are Iraqi Kurds, though Syrians, Iraqi Arabs, and other nationalities are also present.

On arrival at Erbil International Airport, many of the returnees rushed past the journalists in a sea of dark-colored hoods and scarves wrapped around faces to avoid being photographed, large backpacks in tow.

Some carried very little. Those who were willing to speak to Al-Monitor and other reporters there generally cited a desire for opportunities: a new and better life in Europe or medical treatment. Many young men as well as elderly individuals and children were among them. All had paid thousands of dollars for the trip and had been promised an easy route to Europe.

On Nov. 14, the bodies of two Kurdish men who died in Belarus were flown back: Gaylan Dler, 25, had diabetes and died without a proper insulin supply, and Kurdo Khalid, 34, died of a stroke in Minsk.

At a press conference attended by Al-Monitor at the airport shortly before the flight's arrival, Kurdistan Regional Government spokesperson Jotiar Adil stressed that the region’s economic issues and instability, often cited in the media as the driving forces behind the departure of those stranded on the Belarus border, were not the main issue, as all of those who left did so by paying a large amount.

They have “financial possibilities,” he said, that many in the country and elsewhere do not have. He noted that a commission was exploring the situation further and more than 10 people engaged in smuggling had been arrested.

Speaking at a forum at the American University of Kurdistan in Duhok on Nov. 16, KRG Prime Minister Masrour Barzani had reportedly noted that many of the region's economic issues are due to things beyond the government’s control, such as budgetary and other conflicts with the central government in Baghdad, oil prices and the COVID-19 pandemic.

In response to a question from Al-Monitor at the press conference on Thursday, Atil confirmed that the continuing presence of the Kurdistan Workers Party (PKK) and the resulting instability were contributing causes as well.

The PKK has long been designated a terrorist organization by the KRG’s northern neighbor Turkey as well as by the United States and the European Union.

Atil noted that the Kurdish inhabitants of 600 villages remain displaced and cannot return due to the presence of the PKK in their areas.

In September of last year, peshmerga Gen. Sirwan Barzani had stressed the same in an interview with Al-Monitor and had urged the central government in Baghdad to do something about the situation.

The most common route used among the returnees who spoke to Al-Monitor was from Sulaimaniyah to Turkey and then to Minsk. All paid at least $3,000 for the trip, while some claimed to have paid up to $10,000.

One of the passengers who arrived on the evening of Nov. 18 collapsed onto a seat as soon as he was out of the madding crowd of television crews and requests for comment. Head in his hands, he kept his huge backpack on. Al-Monitor asked if he was all right and if he wanted to speak about what he had gone through.

He said he didn’t know any Arabic and only a bit of English but that he is 18 years old and his six-year-old sister needed medical care. He said that was why he had gone with her and their mother to Belarus.

The young man, who preferred that his name not be used, said he was from Sulaimaniyah in the southeastern part of the Kurdistan Region of Iraq and that he had been outside the country before, to Turkey and Iran. He said he had paid $3,800 for the trip to Belarus but could not say where he got the money from.

He had previously gone to Iran, he said, to get medical treatment for his older sister, who had been suffering from cancer. She has since died.

He said he had been certain he could get good medical care for his younger sister if he managed to get to Germany.

When asked as he got up to head toward the exit whether any of his family had remained in the Kurdistan Region when he left with the others, he said, “my father.”

Looking like he wanted to cry, he added that he now had to face him as “he’s outside waiting.”

The EU has repeatedly sanctioned Belarus for human rights violations. It holds that the current crisis is due to the Belarus’ encouraging of migrants to come flood the EU through its border with Poland as a retaliatory act.

The bloc has agreed to impose further sanctions and the list is expected to be finalized in the coming days before being vetted by the European Commission, which could take weeks.

EU Council President Charles Michel has said that the bloc is “facing a brutal hybrid attack” on its borders and that “Belarus is weaponizing migrants’ distress in a cynical and shocking way.”