While Iranian authorities said that spectators had been banned from recent games due to health protocols, many fans speculated the move was aimed at avoiding pressure from FIFA to allow women into stadiums. 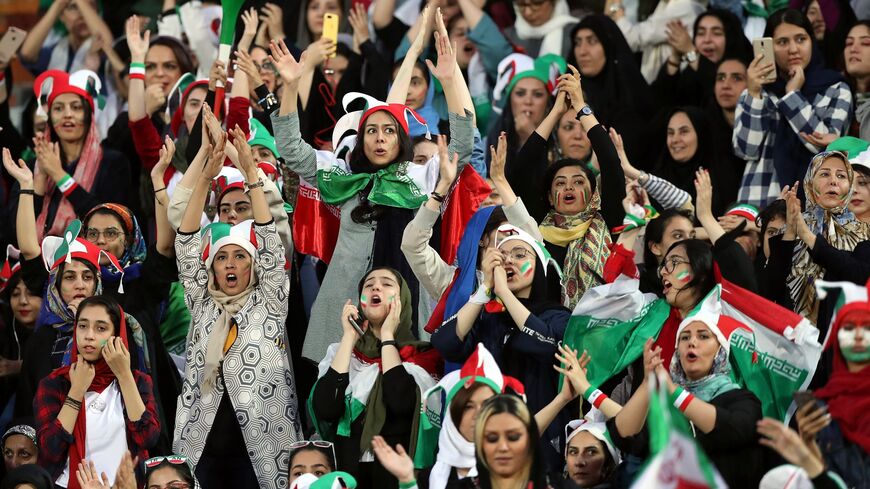 Female football fans show their support during of the FIFA World Cup Qualifier match between Iran and Cambodia at Azadi Stadium on Oct. 10, 2019 in Tehran. - Amin M. Jamali/Getty Images

A correspondent in Tehran
November 3, 2021

Exactly one week after the national Iranian men’s soccer team tied South Korea 1-1 in a crucial 2022 World Cup qualifier in the empty Azadi Stadium in Tehran, Saudi fans — both male and female — loudly cheered at Prince Faisal Bin Fahad Stadium in Riyadh as Saudi Al Hilal club took on Iran’s Persepolis in the quarterfinals of the AFC Champions League.

Just a few years ago, it would have been hard to believe that in women in Saudi Arabia, where they did not even have the right to drive until recently, can now watch soccer games in person. But while Iran enjoys a much more progressive and robust civil society than the kingdom, Iranian women still are denied the right to watch sports events in stadiums — a ban that has persisted for the past 40 years.

Prior to the Iran-South Korea match, world soccer governing body FIFA issued an ultimatum to the Iranian Football Federation on Sept. 9 that women had to be allowed in the stadium, or it would ban Iran from hosting matches.

On Oct. 10, the Iranian Football Federation officially announced that the match against Korea would be held Oct. 12 without any spectators, Previously, they had announced that as many as 10,000 fully vaccinated spectators would be allowed to enter the stadium.

"After a lot of discussions, we decided that the game would be without any spectators," Hassan Kamrani Far, secretary general of the Iranian Football Federation, said on Oct. 11. "We would have to observe a lot of coronavirus protocols and would have to ask [fans] to show [negative COVID-19] PCR tests."

These remarks were met with skepticism, and many fans were of the opinion that the federation had barred spectators because it could not meet FIFA's demand for female spectators.

Faezeh Hashemi, the daughter of late President Akbar Hashemi Rafsanjani, who always supported the presence of women in stadiums, said on Oct. 11, "I hope FIFA is not fooled and follows up on this issue. This is a ploy."

Hashemi, who called for boycotting the June 18 presidential elections, added, "Coronavirus is an excuse. They wanted to prevent women from going to the stadium, and they used coronavirus as an excuse."

Female fans were allowed into the stands for the first time on Oct. 10, 2019 in the match between the Iranian and Cambodian national football teams when moderate president Hassan Rouhani was in office. But the moderates and reformists have been replaced by hardliners who have no interest in such breakthroughs.

Eventually, the national Iranian football team tied the South Koreans 1-1. However, less than a week later on Oct. 16, Persepolis FC was destroyed 3-0 by the Al Hilal Saudi Football Club — which has professional Brazilian and French players on their roster — in Riyadh.

Saudi women were supporting Al Hilal from the stands of Faisal Bin Fahad Stadium alongside men. While some were fully veiled, others were not wearing a headscarf at all. Saudi women, many wearing blue Al-Hilal T-shirts, cheered for their team with enthusiasm. Their deafening applause could be heard by the Persepolis players, who have been playing without spectators for more than a year.

This prompted widespread response from Iranians on social media, who criticized their leaders for not granting minimal rights for women, and posted pictures of Saudi female fans in the stadium who were not wearing hijabs. Head coverings have been compulsory for women in public since the 1979 revolution.

While Iran has a strong history of social movements to bring about more rights for women, activists have yet to make a breakthrough on this issue.

"The efforts of women and civil society activists in Iran in recent years have not led to a fundamental change in the restrictions on entry to stadiums," Iranian journalist Fahimeh Miri told Al-Monitor. "Unfortunately, there is very serious resistance to creating an opening for women's rights in the Islamic Republic."

It’s not clear whether the Iranian Football Federation's decision was to repel FIFA pressure to admit female fans or over concerns of implementing necessary health protocols. Nevertheless, the juxtaposed scenes of the empty Azadi Stadium in Tehran and the cheering Saudi women at the Riyadh stadium frustrate many women's rights activists in Iran.