Years of campaigning is bearing fruit and victory seems just around the corner for civil and women's rights activists in Iran, who have gone the extra mile in convincing the state to open soccer stadiums to Iranian women. 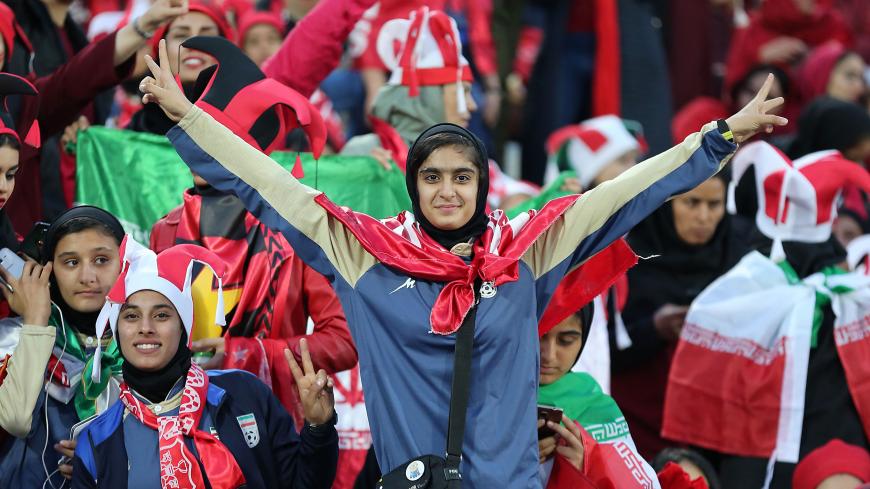 Persepolis' female fans cheer for their team during the second leg of the AFC Champions League final soccer match between Iran's Persepolis and Japan's Kashima Antlers at the Azadi Stadium in Tehran, Nov. 10, 2018 - ATTA KENARE/AFP/Getty Images

Iranian women's relationship with sports events could hardly be more complicated. They are allowed to watch female competitions — but barred from most men's events (women have occasionally been granted permission to watch men's volleyball and basketball).

The toughest taboo has always been men's soccer; this has drawn constant criticism from women's advocates, who have launched various campaigns to push for their right to see the sport played. The campaigns have been coupled with and backed up by international pressure as well.

During his March 2018 trip to Iran, the president of the world soccer governing body FIFA attended the popular derby between Tehran archrivals Persepolis and Esteghlal in the capital. Following the match, Gianni Infantino sat down with Iranian President Hassan Rouhani. And back in Zurich the day after, the FIFA chief announced in a presser that his Iranian host had given his word that the ban on women's entry to men's soccer events will be lifted.

“There are two ways to deal with this matter — either we criticize, we sanction, we condemn, we don’t speak and we cut relations," said Infantino in a soft warning to Iran and other states practicing similar bans. "Or we go there and have a discussion and try to convince the leaders of the country." The FIFA president said that Rouhani, while offering assurances, had also noted that the process would take "a bit of time."

Ever since that meeting in Tehran, several positive steps have been taken toward a settlement of the issue. On June 20, Iran's national team faced Spain in a key match during the FIFA World Cup in Kazan, Russia. In Tehran, the city's iconic Azadi Stadium hosted a screening of the game, which would up being a nail biter. This was the breakthrough. Authorities allowed women to enter the stadium and watch live video of the match on a giant 1,200 square-meter screen. Hours ahead of the game, rumors kept circulating that permission for women to attend had been revoked. But women ended up entering the stadium in relatively large numbers for the first time in nearly four decades of Islamic Republic rule.

Arameh Etemadi, a Tehran-based journalist, was one of the female spectators who made it into the stadium. "I was not actually watching a real soccer game [in person]. But even that was still a thrilling experience, which we as women had been deprived of for years," she told Al-Monitor. While bringing into question the logic behind the ban, Etemadi said she believes the recent small developments paving women's way into stadiums are the fruit of years of campaigning by Iran's civil society activists.

Not everything has gone smoothly after the Iran-Spain game. The country's hard-liners further sharpened their attacks, albeit to little avail as the next episode marked another victory for Iranian women. On Oct. 16, they once again found their way into the grand stadium, purchasing tickets this time for a friendly match between the national teams of Iran and Bolivia. Nevertheless, the women given permission to attend had to follow the game in a special section. They were the chosen ones, mostly journalists, family members of the athletes on the field as well as staffers of Iran's Ministry of Sports and the country's soccer federation. The ban was, therefore, still technically enforced on ordinary women.

Although women's entry was limited and of a handpicked nature, Iran's hard-liners immediately mounted more pressure. The prosecutor general was the first senior official to hit out at the Rouhani government's latest decision. "Women's presence at stadiums is social harm," Mohammad Jafar Montazeri said Oct. 17. "There is no religious justification for them to go there and watch men's half-naked bodies. By doing so, they are committing a sin," he added. The strongly worded remarks concluded with the warning that officials attempting a repeat will face the "harshest judicial action."

But the message was not taken seriously. On Nov. 10, women once again found the gates opened to watch the Asian Football Confederation's Champions League final pitting Iran's Persepolis against Japan's Kashima Antlers. Women were given space but again in a segregated stand and were barred from sitting among the male spectators. Still, this was considered another leap forward taken in the presence of Infantino, who watched the game from the VIP section.

Although their stadium attendance has been limited to those few instances, Iranian women seem to have succeeded in slowly bringing judicial authorities on board. Hadi Sadeghi, the cultural deputy of Iran's judiciary, said Dec. 23 that women's presence at stadiums was not counter to religious rules on the condition that "morality was observed" and the stadium atmosphere was controlled enough to prevent improper words shouted by male fans in women's presence. This significant reversal by the judicial authorities, who had earlier shown no willingness to compromise, could be interpreted as proof of Rouhani's remark that the issue can be settled in the course of time.

Iranian women's rights advocates and civil society members contend that the new achievements were earned thanks to their tireless campaigning. Some, however, are still unhappy. "One cannot disregard the progress made, but I think that's too little," women's rights activist Fahimeh Miri told Al-Monitor. "Besides, the selective approach which isolates women in a corner of the stands does not seem to be a solution." According to the senior journalist, the limited permission is only meant to do away with international pressure and to "fool" FIFA authorities. For a genuinely free entry of women, she said, "they must be given the chance to buy tickets just like men and choose their seats from any section in the stands, regardless of who sits next to them."

Although Iranian women are still far from where their European counterparts stand when it comes to watching men's soccer, developments in the past nine months have been fast-track and highly remarkable, breaking a decades-long deadlock. In a country where pressure from the powerful ultra-conservative institutions is always immense and effective in blocking social change, this is but pure success.

The gradual but steady strategy adopted by Iranian activists for change in this sector with a bottom-up nature seems to be of greater impact than the Saudi model, which was rooted in an official top-down order. In the Iranian version, the activists have to sweat it out for every single step forward, but this also encourages them to make sacrifices to safeguard the smallest achievements. In the top-down Saudi-style pattern, however, risks remain high that the older restrictions could be quickly restored by a new official's flip of a pen.