The politics behind Iranian women's entry to Azadi stadium

Iranian women were allowed into Tehran’s Azadi Stadium last week to watch a high-profile soccer match live. A lot of politics were at play to make that happen. 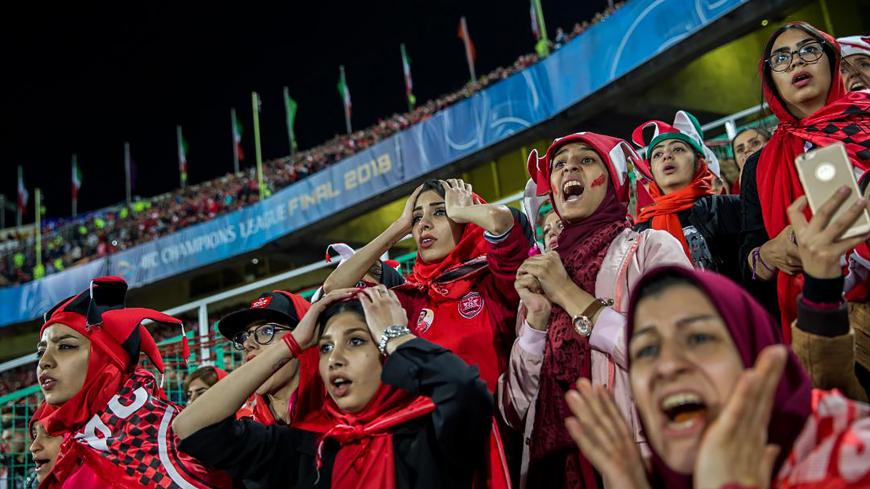 Asian soccer's most important game of the season, the AFC Champions League final, was held in Tehran on Nov. 10. What transpired on the pitch was somewhat anticlimactic, not to mention discouraging for the Iranian side, as Iran's Persepolis and Japan's Kashima Antlers reached a goalless draw that meant the latter emerged victorious on aggregate. But a lot more was going on in the VIP section and the packed stands of the iconic Azadi Stadium.

Gianni Infantino, president of world soccer’s governing body FIFA, was watching the game next to high-level Iranian officials led by First Vice President Eshaq Jahangiri as well as Asian Football Federation President Sheikh Salman of Bahrain. From a small designated area in the stands, some 800 Iranian women were also watching, but much more ecstatically, many of them crying tears of excitement. For most of them, it was the first time they had entered the stadium to watch a soccer match live.

Indeed, it was the second time in the almost 40-year history of the Islamic Republic that women had been allowed in to watch a live game. Less than a month before, a much more limited number of women — consisting of families of sportspeople and other industry insiders — had been granted permission to watch the friendly Iran-Bolivia game in Azadi Stadium. In late June, Iranian women entered Azadi for the first time to watch a crucial Iran-Spain World Cup game beside men, albeit they watched a broadcast of the game from monitors in the stadium. It garnered international attention, even from Spanish football captain Sergio Ramos, who said in a tweet, “They are the ones who won tonight.”

Iranian women have called for open stadiums and tried — sometimes successfully — to enter them donning wigs and mustaches for years. But what made recent concessions possible has been game-changing local and regional political developments. For one, regional archrival Saudi Arabia welcomed women to stadiums at the start of 2018, something that carried a sting, both for many ordinary Iranians and also authorities. Then, world soccer’s most anticipated event, the World Cup, upped the ante. Some Iranians who traveled to Russia to watch the games live showed their discontent with the stadium ban of women.

So when the FIFA boss traveled to Tehran in early March to watch the Tehran derby between Perspolis and Esteghlal, he also spoke with President Hassan Rouhani and naturally discussed the ban. He said his trip produced results, as the president promised him women will be granted entry into the stadium. “He told me that in countries such as Iran, these things take a bit of time,” Infantino said. On the day of the derby, 35 women were detained for trying to enter the stadium. Infantino sent several follow-up letters to be apprised of updates in the ensuing months.

There is no doubt that such a change cannot materialize overnight in Iran. Some of the ruling clerics who imposed the stadium ban in 1980, shortly after the Islamic Revolution, still emphatically call for it to be upheld. They say women should be safeguarded from the brutish atmosphere of a masculine stadium, where insults are hurled and tensions rise. Of note, prosecutor general Mohammad Jafar Montazeri vigorously condemned women being allowed entry to watch the Iran-Bolivia match. Even as he threatened people and authorities alike with legal action should women gain entry to stadiums again, he was widely criticized by both the Reformist and conservative camps for suggesting the sight of "half-naked” footballers would “lead to sin.”

Iranians outside the country have been supporting the cause of women’s entry to stadiums as well. In late June, 18 prominent women of Iranian origin, including Iran’s only Nobel laureate Shirin Ebadi, penned an open letter calling on FIFA to demand Iran end the stadium ban for women. “As Iranian women, we support our national team, but we do not forget those who cannot attend matches or have gone to jail trying to enter the stadiums in Iran,” they said.

Supporting their claim is Article 4 of the FIFA Statutes, which addresses tenets such as nondiscrimination, equality and neutrality. It states that discrimination of any kind against, among other things, gender, “is strictly prohibited and punishable by suspension or expulsion.” FIFA also commits to remaining neutral in matters of politics and religion, which explains its relatively tacit approach before 2018, but maintains that it may make exceptions concerning matters affected by its statutory objectives.

Photojournalist Forough Alaei managed to enter the stadium, after much difficulty, to document women’s historic moments on all three instances in recent months. As she sees the situation, it was certainly the mounting pressure on Iran, not an internal eagerness to reform, that led to the creation of those moments.

“In my opinion, these concessions happened because of pressure exerted by FIFA, mixed with rising pressure from inside the country,” Alaei told Al-Monitor.

President Rouhani himself is seemingly in favor of lifting the stadium ban. In addition to his promise to Infantino, he has made several public remarks to that effect. Most recently, on Nov. 13, he asked, “What is wrong with dedicating a part of sports stadiums to women, something that has no contradiction with the law and Sharia [Islamic law]?” while making a point that the country can boost social morale this way during times of economic hardship under returning US sanctions.

But even a presidential endorsement may not be enough. “Talk is one thing, but having the power to enact change is another,” Alaei said. “For instance, a high-ranking female authority that was put in charge of allowing women into stadiums told me she had no real power to get entry permits for some of the women.”

FIFA pressure grew in the run-up to the AFC Champions League final match. Days before the match, FIFA Secretary-General Fatma Samoura, after meeting with a prominent Iranian campaigner who had protested the stadium ban during the World Cup, said that the governing body continues to work with Iran to end the long-running ban. The campaigners’ cause had garnered some 200,000 signatures.

During the final match in Tehran, Infantino made sure to personally check that there were at least some women in the stadium — how many women attended, and how they were selected, is locally contested — and he was quick to proclaim victory afterward. He put it down to the “power of football” and expressed confidence that further progress will be achieved in the near future. That remains to be seen.