For some Iranians, the visible female audience at a recent soccer match at Tehran's Azadi stadium was a meaningful win in a long war over allowing women to attend public soccer matches, but others are frustrated at what they consider a publicity stunt. 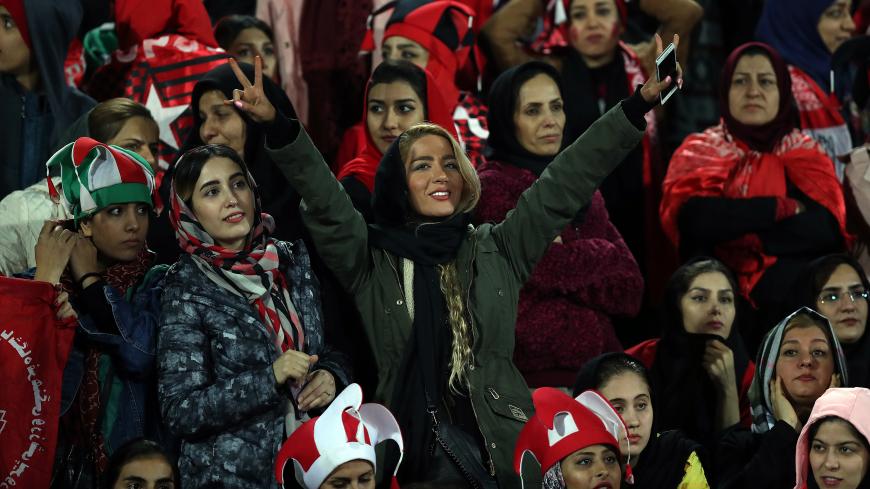 The Iranian soccer team Persepolis battled it out against Japan’s Kashima Antlers in the Asian Champions League in Tehran Nov. 10. But before the referee announced the start of the game, FIFA President Gianni Infantino, who had traveled to Iran to watch the match, had a request. Infantino asked to be shown that Iranian women had been allowed into the Azadi stadium to watch.

To fulfill his request, Mehdi Taj, the president of the Iranian Football Federation, showed both Infantino and Asian Football Confederation (AFC) President Sheikh Salman a group of about a thousand women in the stadium — separated by fencing on both sides from their male counterparts.

But Infantino was not satisfied and asked Taj to provide a closer shot of where the women were sitting. In published footage, the male spectators can be heard shouting “It’s a lie. It’s a lie,” protesting the lack of ticket sales to women and their pre-selected presence in the stadium. Not all women who wanted to watch were allowed to enter — only those who were handpicked by the Iranian Football Federation were present.

Sahar Toloui, a journalist for Iran’s daily Shargh, told Al-Monitor, “I’ve been a Persepolis fan and a soccer fan since I was a child. Both my mother and grandmother went to stadiums before the revolution. But I have not gone yet.”

Toloui had the chance to be on the pre-selected list and go to the stadium that night. However, she chose not to do so. “When they invite you, it means they have selected you. It does not mean that they have recognized your right to be in the stadium. I could have gone. But my mother, grandmother, friends and colleagues could not, because they were not on the list of invitees,” she said.

Among the Iranian women who did attend were nine female journalists who had permits from the AFC. Niloofar Hamedi, a sports journalist for the Iranian News Agency, was one of them and watched a men’s soccer game at the stadium for the first time.

Hamedi, who has been vocal in the recent years on opening the stadium doors to women, told Al-Monitor, “I don’t believe in selective presence. However, I do think that in the current situation, this is an opportunity which should be taken. Not attending the stadium at such a time means an opportunity lost. Who do you think will be happy and who will be upset when the images of women in stadiums are published? The answer to this question is clear.”

Not all women who headed to Azadi stadium on Nov. 10 were allowed in. Those whose names were not on the pre-selected lists, along with some who were on it, saw the stadium gates closed in their faces. Several other women managed to enter the stadium dressed as men. Some were caught and stopped.

Was this limited female presence in the Azadi stadium enough for FIFA and the AFC?

Toloui said she does not know how FIFA works in regard to implementing regulations for the women’s attendance at stadiums. However, based on the tweets posted by the official accounts of this federations, she assumes FIFA is “happy” with what happened. She told Al-Monitor, “We in Iran know that the women’s presence is selective. But we don’t know if FIFA is aware of this or not. Even foreign media did not report much on the selective nature of women’s presence. This is a trend we also see in volleyball matches.”

Hamedi believes there is a mutual understanding between the Iranian Football Federation and FIFA on women’s attendance. When Infantino visited Iran on March 1 to attend the Tehran Derby, Hamedi asked him to guarantee the permanent presence of women in stadiums. Infantino’s reaction, as seen in a video she posted to Twitter the same day, was only a smile.

The issue has become a hot topic on Farsi-speaking social media and other outlets following the Asian Champions League finale. Some say the limited presence was only for “display” and the women should not have taken part in it. Others, however, see it as small step in the right direction.

Toloui says, she is not “pleased” with the atmosphere that has been created and does not want to “draw a line” between those women who went to the stadium and those who didn’t go. She said, “The main issue is that they have to give us our rights. I can buy a ticket to go to the cinema, concert …. But to go to the stadium, I cannot. Therefore, I do not go. Personally, I did not think it was right. But I also don’t want to reprimand anyone who did go.”

Will this limited presence gradually lead to unrestricted stadium access for women? Hamedi appreciates the step, saying, “Personally I hope and feel that the current time is the closest we've ever been to the permanent opening of the doors at Azadi stadium.”

While agreeing with Hamedi's view that this limited female presence at the stadium was only for “display,” Toloui said it is difficult to predict the future of the movement. “In the Iran-Bolivia friendly on Oct. 16, this limited presence was again seen. Close to 200 women, mostly celebrities and athletes’ relatives, went to the stadium to watch the game. But this did not happen in the matches that followed. For example, when Persepolis went up against [Qatar’s] Al Sadd [Oct. 23], no woman was present in the stadium. This is why we can say that this limited presence was for display and to lessen the pressure on FIFA — pressure that needs to continue and increase if the Azadi stadium doors are to open to women in the future.”