For the first time since 1979, Iranian women are allowed to watch men's soccer matches in Tehran despite stubborn and stiff opposition from hard-liners. 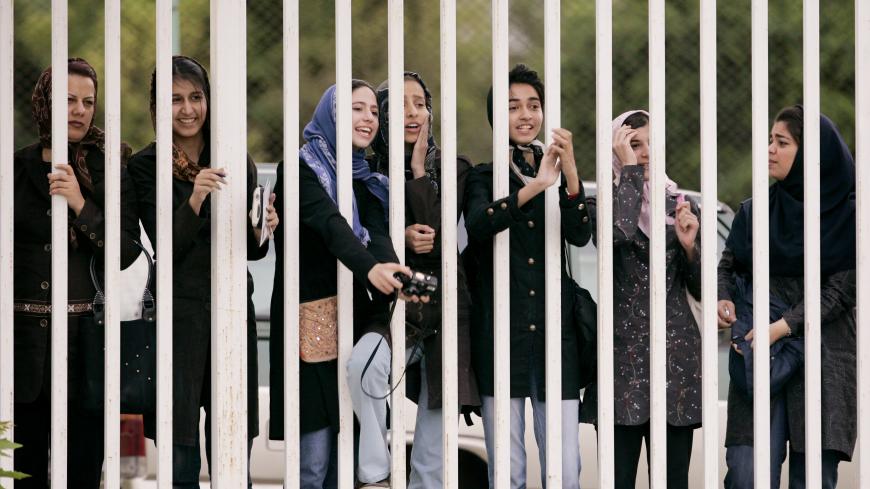 Iranian women watched the practice session of Iran's national soccer team from behind the railings when they were banned from entering Azadi Stadium, in Tehran, Iran, May 21, 2006. - REUTERS/Morteza Nikoubazl

After nearly four decades, a group of Iranian women officially entered the iconic Azadi Stadium in the capital Tehran to watch a soccer friendly between Iran and Bolivia. The decision was made after a security body affiliated with the Interior Ministry approved a request from the country's soccer federation. But only 150 women were granted the historic chance to attend the game, sparking widespread debate among Iranians.

In the past few years, many young Iranian women have defied the ban on watching men's soccer by disguising themselves in male clothing. In some cases, such risky moves have led to arrests.

On Oct. 16, however, a small group of 150 women, mostly from the female sports community, were allowed to enter Azadi stadium where they were given special entryways and bathrooms. Hours ahead of the match, selfies of excited female fans found their way onto social media networks. One photo after the match showed empty stadium seats that were cleaned up by the female spectators.

Printing a full photo of the female fans on its front page, the pro-Reform newspaper Etemad hailed the development as "a step forward." Iran, the official daily of the moderate administration of President Hassan Rouhani, also welcomed the news, which "Iranian women had for long been looking forward to." While lambasting the fact that other women were not granted entry, the paper argued that what happened at the stadium "ended the spell" and created hopes that one day all women will have the chance to watch men's soccer matches in Iran. "What drew attention more than Iran's win against Bolivia was women's presence in the stadium," wrote another moderate daily, Arman. But Aftab, despite being a Reform-leaning paper, spoke critically of why only "privileged women" were allowed in.

Conservative papers, which have for long stood against the idea of women entering stadiums over touted religious and social considerations, remained muted on the story. But a reaction from the country's prosecutor general probably just showed how wide the rift is between Iran's hard-liners and Reformists. "For women to see the half-naked bodies of men [playing in the pitch] is religiously forbidden," said Mohammad Jafar Montazeri. "And this is in violation of [the rules] of an Islamic country." The conservative cleric also advised government officials to stop the trend or face judicial "action."

The fact that only a limited number of women were given the pass served as the line dividing ordinary Iranians who are still clashing on social media. Some online users applauded the move as heralding better days. "Women being allowed for the first time, although selectively and in limited numbers, is still a crucial development. Only last year, we wouldn’t have imagined this. No government can dodge change, and this brings us hope."

Another user explained the decision as a sign of the government's concern about popular pressure, tweeting, "And that means we are moving in the right direction; let's keep up the job with more vigor." Yet others insisted that the Rouhani administration has to tackle more serious challenges. One person tweeted, "So, women at stadiums. Now, let’s ask the pro-Western [officials] which one of women's problems was basically resolved with this. When are they going to hold themselves accountable for their five years of mismanagement." Of note, Rouhani first took office in 2013.

In June this year, Iranian women were let in the same stadium to watch two World Cup matches on big screens, a move that injected hope that the real thing would be just around the corner. In an article on Oct. 17, the official Islamic Republic News Agency (IRNA) explored prospects ahead and raised the question of whether the opening of Azadi's gates to women was a "show or the beginning of real change." That change was in the list of campaign pledges made by Rouhani during his bid for re-election in 2017, as he pushed to garner women's votes to secure a second term in office.

The question of who will win the tug of war between Iran's hard-liners and Reformists over women's entry to men’s soccer matches has yet to be seen. Perhaps many questions of that nature will be answered on Oct. 23 when Iran's Persepolis soccer team face Qatar’s Al Sadd in Tehran — a tight competition for which Iranian women's entry has reportedly been approved.