The Iran-backed Houthi group did not claim responsibility for the attack, which the Yemeni information minister said killed women and children. 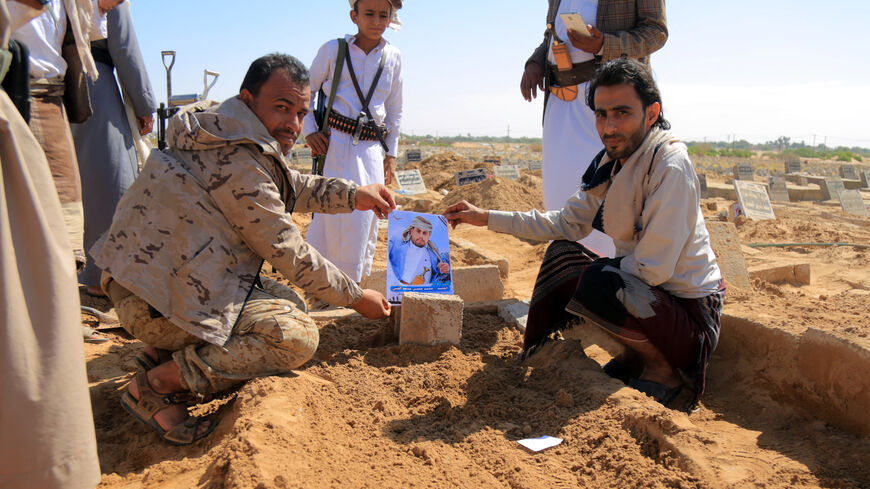 Yemenis attend the funeral of a military commander loyal to Yemen's Saudi-backed government killed during battles with Houthi rebels in the town of Al-Juba in the country's northeastern province of Marib on Oct. 30, 2021. - AFP via Getty Images

A Houthi ballistic missile attack late Sunday killed or injured more than two dozen civilians at a mosque and religious school in the central province of Marib, according to a senior official in Yemen’s internationally recognized government.

The Iran-backed Houthi group did not claim responsibility for the attack, which Al Eryani said killed women and children.

In February the rebels resumed their offensive on Marib, the last major northern stronghold of the government led by President Abed Rabbo Mansour Hadi. The fighting has escalated in recent months and on Thursday, security officials blamed the Houthis for a ballistic missile attack that struck a home in the neighborhood of Al-Aumd and left at least 11 people dead.

The oil-rich province is home to a million internally displaced people who aid groups warn would have nowhere safe to turn if the conflict worsens. The United Nations said that fighting between the Houthis and government forces in the city of Marib displaced 10,000 people in September, bringing the total number of people displaced from the wider province since the beginning of 2020 to around 170,000.

Yemen has been embroiled in conflict since the Houthis expelled the internationally recognized government from Sanaa in 2014. A military coalition led by Saudi Arabia intervened on behalf of the exiled government the next year.

The war has created what the United Nations calls the world’s worst humanitarian crisis. In March, the Houthis rejected Saudi Arabia’s US-supported cease-fire proposal, saying the agreement didn’t go far enough to lift the coalition’s blockade tactics on the country.

The Houthis also regularly launch armed drone and missile attacks at Saudi Arabia’s civilian and commercial infrastructure. In a statement last month, the UN Security Council condemned the Houthis’ cross-border attacks, including explosive-laden drone attacks last month on the King Abdullah airport in the southern Saudi city of Jizan and on the kingdom’s Abha civilian airport.