Since the Iran-backed rebels renewed their offensive on the government's last northern stronghold in February, the United Nations has recorded a number of attacks impacting civilians. 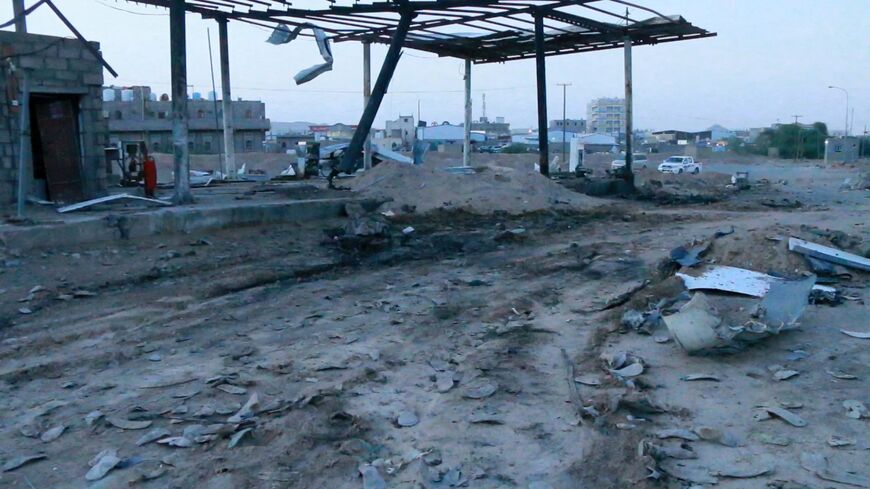 A gas station that was hit by a missile strike in Yemen's city of Marib is seen on June 5, 2021. Yemeni state media reported that the strike killed at least 14 civilians in Marib, the government's last northern stronghold, blaming the attack on the Houthi rebels. - AFP via Getty Images

As Yemen’s Houthis continue their assault on Marib, the United Nations' human rights office on Friday sounded the alarm over the rebels’ attacks on civilian areas in the strategic region.

“We are seriously concerned at the continuing impact of fighting on civilians and the targeting of civilian objects in Marib Governorate in Yemen,” Liz Throssell, spokesperson for the UN High Commissioner for Human Rights, told reporters in Geneva on Friday.

The Houthis, who control the capital, Sanaa, and much of northern Yemen, are fighting a Saudi-led military coalition and Yemen's internationally recognized government. In February, the Iranian-backed rebels renewed their offensive on the oil-rich province of Marib, the government’s last stronghold in the north.

Throssell noted a suspected Houthi missile and drone attack on June 10 that struck a Marib City compound that housed the governor’s office, a government ministry, the police headquarters, a mosque and a women's prison. According to the UN official, eight civilian police officers were killed and 30 other civilians, including one woman, were injured.

On June 13, a drone strike blamed on the Houthis hit a girls school in the Saudi border region of Asir, the UN office said. No casualties were reported, but video and photos from the scene showed significant damage to the school.

Earlier this month, at least 21 people, including a 5-year-old girl, died in a Houthi ballistic missile attack on a gas station in Marib near a government military base. The rebel group denied targeting civilians and said it would investigate.

The human right’s office also noted that the Houthis’ cross-border attacks have continued targeting both military and civilian infrastructure in Saudi Arabia, although with less frequency in recent weeks. Since January, the Iran-aligned rebel group has launched some 128 drone strikes and 31 ballistic missiles into the kingdom.

In March, the Houthis rejected a US-backed Saudi cease-fire proposal that included measures to allow fuel and food imports to reach Hodeida. The rebels said the peace plan didn’t go far enough to lift the blockade tactics imposed by Saudi Arabia on parts of the country.

“We urge all parties to the conflict to go back to the negotiating table and agree on a nationwide ceasefire,” Throssell said. “As has been repeated time and again, only a political solution can end this conflict.”