Arab-Israeli parties from the opposition and the coalition disagree over a bill designed to establish a new hospital in the city of Sakhnin. 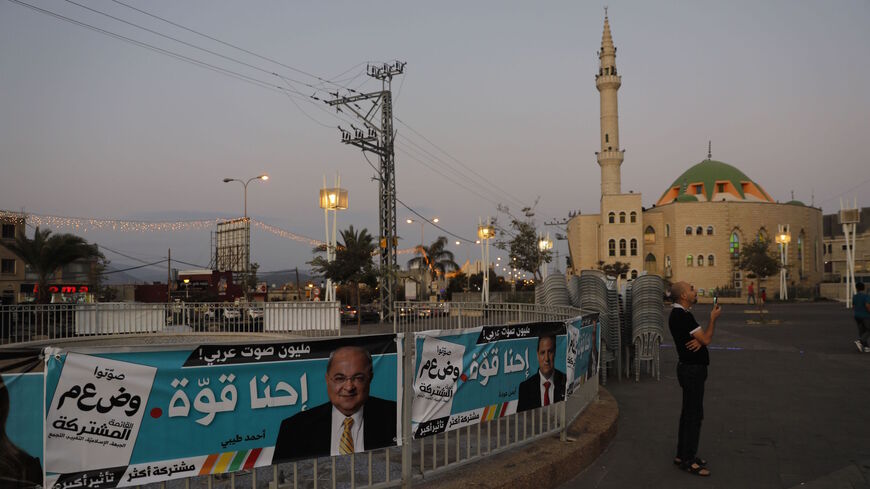 A pedestrian walks past electoral posters in the northern Arab-Israeli town of Sakhnin on Sept. 15, 2019, two days ahead of the Israeli general elections. - AHMAD GHARABLI/AFP via Getty Images

At a preliminary reading Nov. 10, the Knesset approved a bill for building a hospital in the Arab city of Sakhnin in the north of Israel. The proposed law was introduced by Chairman of the (opposition) Arab Joint List Ayman Odeh and would need to be approved at two more Knesset readings in order for it to become law. The chances of that happening seem slim, at least for the moment. Still, the preliminary vote in favor was certainly a moment of victory for the Joint List and the opposition.

The Sakhnin bill was not officially backed by the coalition. So how did the bill pass? As it turned out, Knesset member Mazen Ghanaim of the Arab Ra’am coalition party, who had served in the past as the mayor of Sakhnin, voted this time with the opposition. As a result, the proposed law passed with a majority of 51 votes to 50 opposed.  Emphasizing the importance of this issue for him, Ghanaim said after the vote, “If I am faced again with the same sort of test and I feel that my conscience obliges me to vote against the coalition, then I will resign from the Knesset.”

The results were read in Arabic by Joint List Knesset member Ahmad Tibi, who managed the plenum at the time. In the background, members of the opposition of all stripes, from the Likud, religious Zionism and the Joint List, celebrated the achievement. Truth be told, it was a rare sight of Likud members celebrating a law introduced by Odeh, whom they have blamed in the past for allegedly supporting terror.

Taking into account the diverse composition of the coalition, with partners not necessarily sharing the same agendas (apart from the original desire to topple former Prime Minister Benjamin Netanyahu), the passage of the proposed law at a preliminary reading should not be discounted. In fact, some in the coalition recognize that there might very well be more losses in votes over bills because the coalition is not homogeneous.

But there is also another angle, which concerns the functioning of the opposition. This preliminary vote reflects a strategy adopted by the Likud. The idea is to hurt the government by means of destabilizing the Ra’am Party, deemed by Likud as the weak link within the coalition chain. The Likud is aware of the political conflict between the Joint List and Ra’am over the Arab electorate. For years, the Likud had considered the Joint List as its archenemy. Now, they exploit the tension between Ra’am and Joint List for their own means. They support laws proposed by the Joint List in order to embarrass Ra’am and cause its members to look as if they oppose legislation that would benefit the Arab public.

This strategy was in fact exposed by Likud Knesset member David Bitan last month. Interviewed by Channel 12, Bitan said, “We’re causing damage to the Ra’am in the Arab community. This happened with the cannabis law and the parliamentary investigation commission [on the placement of Arab teachers]. In the end they’ll be damaged, and when they sink in the polls below 4 mandates, they’ll leave the coalition; nothing could help it.”

Those with a long memory might remember that this isn’t the first time Netanyahu has led the Likud to support laws proposed by Arab parties against the government, all the while constantly attacking the Arab parties and denying any cooperation with them. In 1995, the Likud supported a no-confidence vote proposed by the Arab Hadash and Mada parties against the Rabin government, following land appropriation in east Jerusalem for the sake of building Jewish housing. This forced the Rabin government to back out of the plan in the end.

The controversy over the establishment of a public hospital is Sakhnin is not only a political issue. In fact, it reportedly contradicts another initiative brought up last year by a private company for building near the Arab cities of Sakhnin and Arabeh a large complex to include high tech companies, private medical clinics and services, student housing, entertainment and more. Some experts believe there is no financial viability for both projects to coexist. More so, the private project, if approved, would be attached to the Jewish Misgav regional council and not to the municipality of Sakhnin.

Economist and Sakhnin resident Sami Miaari had posted recently on social media in favor of the public hospital bill. In a conversation with Al-Monitor, he explained, “I support the proposed law to establish a hospital in Sakhnin and oppose the creation of a commercial center called a ‘medical campus.’ I cannot imagine why anyone would oppose the creation of a hospital that would provide medical services to residents of the city and the region and contribute to the employment of many doctors and nurses from the Arab society. The time has come to increase public services in Arab municipalities so that the Arab population doesn’t have to seek these services outside its community. This would further strengthen the Arab cities and regional councils with high property taxes.”

Asked whether the vote over the bill might be part of a political conflict between the Joint List and Ra’am, Miaari said, “I’m aware of what’s happening, but even if there are politics involved, I want this move to be realized and bring development to the Arab community.”

Many other residents of Sakhnin support the hospital bill along with Miaari. Still, many of them are pessimistic over the hospital ever being constructed.

Ehsan Khlaily, director of a sports college and resident of the city, told Al-Monitor, “Sakhnin deserves a hospital, and Mazen Ghanaim voted emotionally and by his conscience, but unfortunately, it’s clear that the goal here was to embarrass the coalition and Ra’am within it. It can’t be that the extreme right suddenly cares about Sakhnin residents. What changed?”

Belal Shalata, an attorney specializing in public administration, agrees. Speaking with Al-Monitor, he said, “I think this was a political trick [by the Joint List] to embarrass Ra’am, which is part of the coalition.” Shalata took it even further. He said that the government had approved some two months ago a project for another hospital in the north of Israel near the city of Kiryat Ata. The way he sees it, it would be better for the Arab politicians to really join forces and focus on changing that decision (in favor of the Sakhnin hospital). “Ghanaim is part of the coalition, so why not work with him to advance the cause? I’m sad to say that we are witnessing that there’s no cooperation between the Arab parties on issues connected to the Arab community.”