Ultra-Orthodox Knesset parties are furious over the Muslim Ra’am party voting with the coalition on the Enlistment Law, with the ultra-Orthodox political alliance becoming collateral damage of the rivalry between the two Arab parties. 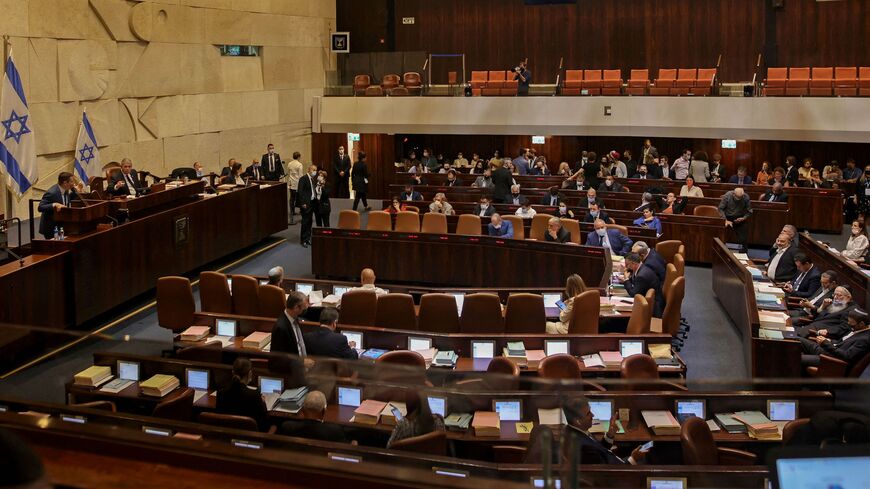 This picture shows a general view of a plenum session and vote on the state budget at the Knesset in Jerusalem on Nov. 3, 2021. - AHMAD GHARABLI/AFP via Getty Images

The coalition suffered another blow Jan. 17, when the draft reform bill failed to pass its first reading in the Knesset. It happened after Knesset member Ghaida Rinawie Zoabi from left-wing Meretz surprised everyone, including her own party, by voting against the bill and, by extension, against coalition discipline. Even the Muslim Ra’am party supported the bill, except for Knesset member Mazen Ghanaim, who was absent when the vote was taken. The coalition responded that it would resubmit the bill again with an exemption for people opposed to it, so that it can be voted on in the next few weeks.

While there was drama surrounding the outcome of the vote, the real drama took place earlier, when the leader of the Shas party Aryeh Deri (opposition) went up to the podium and threatened that if Ra’am voted for the proposed bill, Shas would petition the Supreme Court to take steps to introduce compulsory military service for Israel’s Arab citizens. Addressing Ra’am directly, Deri said, “You have no moral right to decide for Jews and the ultra-Orthodox, who will serve in the IDF and who will not! That is a red line!”

Even before the vote, Minister for Regional Cooperation Issawi Frej of Meretz tweeted, “I understand that there are ultra-Orthodox members of Knesset, who ask how we, the Arab members of Knesset, could vote for the draft reform bill, even though we do not serve in the army. I suggest that they ask themselves why they supported the nationality law even though it only hurt us, Israel’s Arab citizens.”

Ra’am party chairman Mansour Abbas responded to Deri the following day, in an interview with the Arab-language Mikan Radio. He said, “The ultra-Orthodox parties forget that they voted for the nationality law, the Kamenitz law [targeting illegal construction, widespread in Arab towns and villages] and other laws targeting the Arab society.”

It should also be remembered that in the past, Arab Knesset members made a point of voting with their feet and absenting themselves from the plenum for any vote on the enlistment of the ultra-Orthodox. They did so as part of an alliance between parties representing disempowered minorities in the Knesset: the Arab and ultra-Orthodox sectors.

In July 2018, when Netanyahu was prime minister, a different version of the draft reform bill was approved in its first reading with the support of Yesh Atid and the absence of the Joint List’s 13 seats.

Similarly, as part of that same alliance, ultra-Orthodox Knesset members blocked the muezzin law, which would have banned the use of loudspeaker systems by houses of worship in residential areas, between 11:00 p.m. and 7:00 a.m.

It is no secret that Arab and ultra-Orthodox Knesset members cooperated frequently on matters pertaining to religion and state, which, the ultra-Orthodox say, are their “heart and soul.” So what happened now to convince Arabs to participate in the vote over the draft bill? Does it signify a break in the alliance between the Arabs and ultra-Orthodox, and if so, can that alliance survive?

It is important to look back at a tweet by Knesset member Ahmad Tibi of the Joint List. One week before the vote, he posted a very curt statement, declaring, “The Joint List will oppose the draft reform bill.” What he was actually saying was that the Arab Knesset members from the Joint List would participate in this vote, unlike in the past.

Of course, this was not intended just to vote against a law being pushed forward by the government or even to stand alongside their ultra-Orthodox colleagues in the Knesset. It was intended primarily to force Mansour Abbas and Ra’am to take part in the vote on the enlistment of the ultra-Orthodox and to support the coalition. The Joint List wanted to destabilized Ra’am and to discredit it vis-à-vis its electorate. It was a sophisticated political maneuver by Tibi to embarrass Abbas. The bill of the ultra-Orthodox parties became collateral damage of the rivalry between the two Arab parties.

Jaafar Farah, director of the MUSAWA advocacy center for Arab Palestinian citizens in Israel, explained to Al-Monitor, “The alliance of the ultra-Orthodox and Arab minorities had been a religious alliance, until Mansour Abbas joined the coalition. Historically, Arab and ultra-Orthodox Knesset members cooperated on advancing child stipends, against budgets for kibbutzim, in favor of expanding jurisdictions of Arab communities and of periphery-development Jewish towns, to preserve exemption for Arabs and the ultra-Orthodox from enlistment, and in determining the electoral threshold in Knesset elections.”

Farah notes that the ultra-Orthodox parties traditionally support the right. If former Prime Minister Benjamin Netanyahu steps down in the framework of a plea bargain, the Likud might actually decide to join the coalition. And if this happens, the ultra-Orthodox will likely follow. In such a situation, Ra’am could eventually find itself back in the opposition, he claims, and with its supporters punishing it for its newly-adopted positions.

While ultra-Orthodox parties have been cooperating for years with Arab Knesset colleagues on issues of religion and state, they also supported quite a few bills considered detrimental to the Arab public. We have mentioned the Nationality and the Kamenitz laws, but there were also other disturbing bills such as the acceptance committees law (on regulating acceptance at newly-constructed localities), the security cameras law (enabling authorities to watch people, mainly Arab voters, arriving at the polling stations), etc.

This bad history nonetheless did not prevent Shas from being furious this time with Ra’am and Abbas. Itzik Sudri, the former Shas spokesperson, told Al-Monitor, “What Mansour Abbas did in this context will never be forgiven. He involved himself in a struggle between us and the left-wing camp, and stuck his nose into places he should have gone. He caused enormous harm to the alliance of minorities over religious affairs, which was based on common interests. This created a significant rift between the two groups, and destroyed the status quo in relations with the ultra-Orthodox in general and Shas in particular and the Arab society. Until now, it was considered (by both sides) taboo to intervene in sensitive issues. Unfortunately, we discovered that Abbas was exploited by the coalition. And yet, he will be tossed (by his coalition partners) to the opposition benches as soon as another partner is found to replace him. Then, when he goes running to the various Knesset committees, he will need the ultra-Orthodox parties.”