Entrepreneurs from the Arab city of Sakhnin are done waiting on the government and working with Tel Aviv's Ichilov Hospital to establishment a local medical facility. 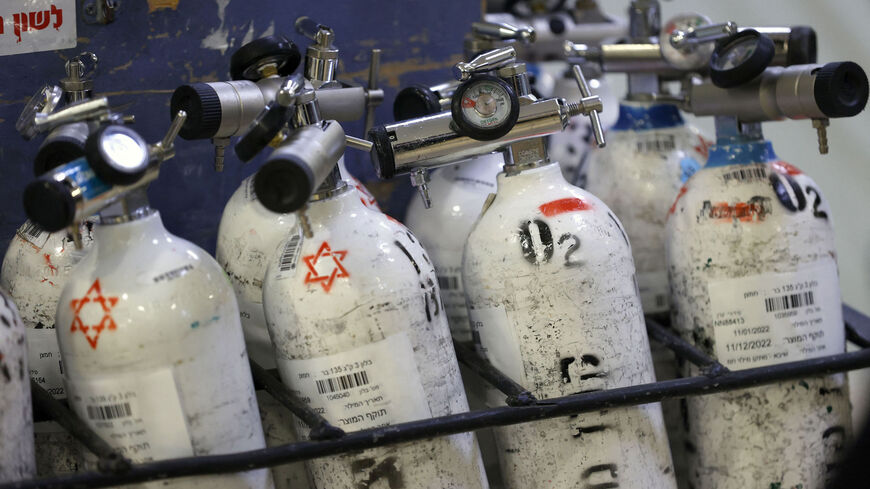 Medical oxygen canisters are seen for the reopening of the dedicated children's COVID-19 ward that reopened as a response to increased infections among Israel's children at Sheba Medical Center in the Israeli city of Ramat Gan, on Jan. 11, 2022. - JACK GUEZ/AFP via Getty Images

The city of Sakhnin in the Galilee is one of the centers of the Arab community in Israel and is famous for, among other things, the large proportion of medical professionals who were born and raised there. It is often called the “City of Doctors,” but the shoemaker’s children are going barefoot, as it were — it’s one of the cities in Israel that lacks a hospital. The nearest medical center is in Nahariya, almost 40 kilometers (25 miles) away, a medical center that like many other hospitals in the periphery of the country, suffers from a shortage of some important medical services.

A group of Arab entrepreneurs who are residents of Sakhnin, headed by businessman Mohamed Abu Younis, wish to change this situation. The entrepreneurs, together with the Tel Aviv hospital Ichilov announced the creation of a medical center, that while small, approaches the definition of a hospital for the first time in an Arab city in Israel.

According to the entrepreneurs and Ichilov, the medical center will be 3,600 square meters large and include 14 specialist clinics in various disciplines and six operating rooms. It will also include an imaging center equipped with a CT scanner, an X-ray machine, mammography and ultrasound machines. It will have dialysis services and four surgery theaters intended for midlevel surgery, equipped with the newest technology and a recovery and outpatient department with 20 beds.

Eighty people will be employed at what will be known as Sakhnin Ichilov, all of them from the region, and there will be an arrangement with Ichilov specialists who will travel from Tel Aviv to Sakhnin for consultation and treatment of complex cases.

“The establishment of the hospital in the region is a national mission,” said Roni Gamzu, director of the Ichilov-Tel Aviv Medical Center. “Ichilov will contribute the best specialists, knowledge and experience in order to give the population of the region the excellent care that Tel Aviv residents receive. We are proud to take part in this important project with a huge impact on all aspects of life in the State of Israel.”

Abu Younis, who lives in Sakhnin, told Al-Monitor, “It’s the realization of a dream in which I can help my neighbors receive medical care close to home, and a workplace for medical staff who live in the area and now will have an opportunity to care for their city and its residents.”

He explained that the new center will work within the Israeli health system, which is based on HMOs that provide referrals and funding for hospitalizations, and that negotiations are being held with the HMOs. In Israel, every citizen pays a percentage of their income as a health tax that functions as health insurance. The money is transferred to one of four HMOs chosen by the citizen, and they provide regular medical services. When hospitalization is needed, the HMOs refer the patient to a hospital and fund the hospitalization and treatment.

Abu Younis added, “We promise to provide the best service experience. For us in Sakhnin, Ichilov is considered the best hospital in Israel, and I thank Professor Gamzu and members of the board of directors Professor Yitzhak Shapira and Mr. Ilan Sofer, for understanding the weight of the moment and for helping us bring the excellence of Ichilov to our home in Sakhnin.”

The Sakhnin medical center is expected to open in October 2022, headed by Dr. Saadi Abed, a former director of the Zebulon Medical Center.

Husam Halaili, another of the entrepreneurs, said in an interview with Army Radio that the idea emerged from the urgent needs of more than half a million residents of the region who don’t have adequate medical services. They have to travel far to receive certain medical treatment, and wait lists at area hospitals are long.

Halaili clarified that at this stage it won’t be a hospital in the strict sense of the term: “It’s a kind of boutique hospital for outpatient care, which will start small and later become the first hospital in the Arab sector. Ichilov is a hospital with a lot of experience in medical administration and infrastructure operation and the connection between the center and periphery will lead to success.”

The idea to establish a hospital in Sakhnin is several years old, but in Israel such ventures require government resources. A proposed law to establish a hospital in the Arab city was introduced by members of the Joint List party, who are in the opposition, and it surprisingly passed the first reading Nov. 10 despite the opposition of the government, with the vote of coalition member Mazen Ghanaim, who is not only a member of the Ra’am Party but a resident of Sakhnin and its former mayor, who perviously tried to advance the establishment of a hospital. The proposed law says that it would be the director of the Health Ministry's decision whether to establish the hospital. The bill includes amendments that will enable the Israel Land Authority to hasten the process.

While the bill is likely to get stuck in the Knesset and not pass, but a senior figure at the Health Ministry told Al-Monitor that the establishment of the private medical center will lay out the initial infrastructure for a full hospital, and it is plausible that the ministry will eventually take up the initiative.

However, the Health Ministry's original plan to establish a new hospital in the north was actually intended for Kiryat Ata, adjacent to Haifa, which houses the large Rambam hospital. Supporters of the proposal to switch the location to Sakhnin say that the distance of the Galilee from other hospitals was decisive. They express wonder that after 73 years of existence, the State of Israel has established no public hospital in an Arab city. Such a hospital would not only provide health care for the population of the region but function as an important employment engine, considering that the medical and paramedical professions are growing in the Arab sector .

The Sakhnin entrepreneurs didn’t wait for the government, and their initiative may prod officials and politicians in Jerusalem to bring in the necessary funding and infrastructure for a hospital that provides full medical services.