Israeli diplomacy efforts are heating up with European Union members and other countries to see Hamas and Hezbollah blacklisted completely. 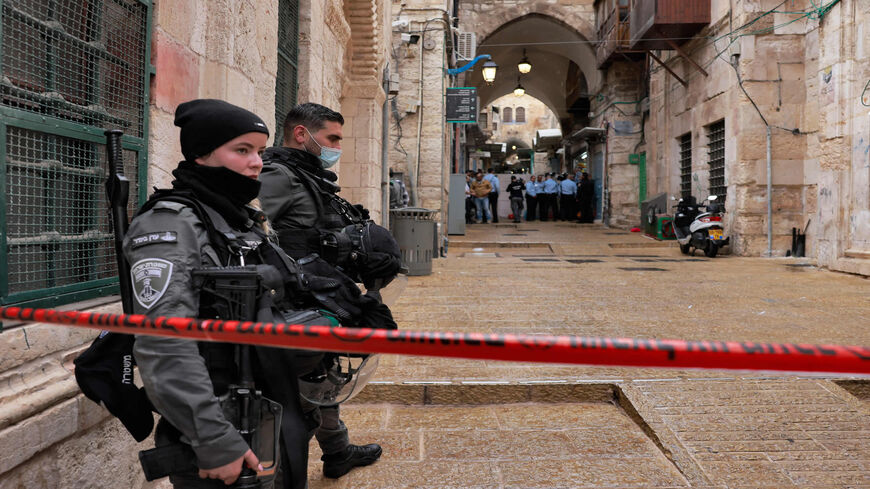 Israeli border guards stand guard behind a security perimeter at the scene of a shooting in the Old City of Jerusalem, Nov. 21, 2021. - Menahem Kahana/AFP via Getty Images

A member of Hamas opened fire Nov. 21 in the alleyways of Jerusalem’s Old City, killing Israeli national Eliyahu David Kay and wounding four others, two of them seriously. Reports referred to the gunman Sheikh Fadi Abu Shkhaydam as a “senior Hamas official in Jerusalem.”

Two days earlier, on Nov. 19, Israeli leadership praised the United Kingdom’s planned move to designate the entirety of Hamas as a terrorist organization.

Defense Minister Benny Gantz tweeted, "I welcome the British government’s upcoming move to designate Hamas in its entirety as a terrorist organization — including its political wing. This sends a strong message of zero tolerance toward terrorist activities aimed at harming the State of Israel and Jewish communities."

This move by London followed a diplomatic dialogue between the two foreign ministries, but it also followed a broader, double-track campaign by Israel’s Foreign Ministry in recent years, to get both Hamas in its entirety and Hezbollah in its entirety designated as terrorist groups by as many countries as possible. For instance, the outlawing of Hezbollah in its entirety was brought up on several occasions in meetings between Israeli and French officials. It came up in the meetings conducted by a senior Israeli political and security delegation that visited Paris at the end of October. Israeli diplomatic sources estimated at the time that France will be the last European country to take that move.

According to the Foreign Ministry in Jerusalem, the United States, Canada, the European Union, the United Kingdom and of course Israel have all designated Hamas in its entirety as a terrorist organization. Australia, New Zealand and Japan recognized the military arm of Hamas as a terrorist organization. Germany’s Bundestag lower house of parliament passed last June a law outlawing symbols of Hamas.

Where Hezbollah is concerned, the list is much longer. Apart from Israel, the United States, Canada, the Gulf Cooperation Council, Bahrain, the Netherlands, the United Kingdom, Estonia, Argentina, Guatemala, Colombia, Honduras, Paraguay and Germany have all listed Hezbollah in its entirety as a terrorist organization. The parliaments of Austria, the Czech Republic, Lithuania and Latvia had issued statements calling for the group to be blacklisted. The EU, New Zealand and Kosovo have declared the military wing of Hezbollah as a terrorist organization. Switzerland and Australia have started security investigations on the issue, ahead of possible blacklisting of Hezbollah’s military wing.

In his July meeting in Brussels with EU foreign ministers, Lapid said, "On our northern border we are threatened by Hezbollah, the largest terrorist organization in the world, and in Syria, apart from the ongoing civil war, we are also witnessing Iranian entrenchment. In the south, in the Gaza Strip, we have a terrorist organization that has taken 2 million citizens as hostages."

In fact, Lapid was engaged in the campaign for designating Hezbollah in its entirety as a terrorist organization well before joining the government. Meeting in 2018 with then-EU High Commissioner for Foreign Affairs Federica Mogherini, Lapid said, "The EU needs to know that there is no separation between the political wing and the military wing of Hezbollah. Hezbollah’s political wing is their conduit for transferring money, and we are determined to stop it."

American legislators are also engaged in the Israeli diplomatic campaign against Hezbollah. For instance, 260 members of the European Parliament, national European parliaments and members of Congress and the Senate sent July 2020 a letter to the EU institutions’ presidents, demanding they ban the political party and militant group Hezbollah.