The claim came amid a Trump administration push for the EU to fully designate Hezbollah's political wing a terrorist group. 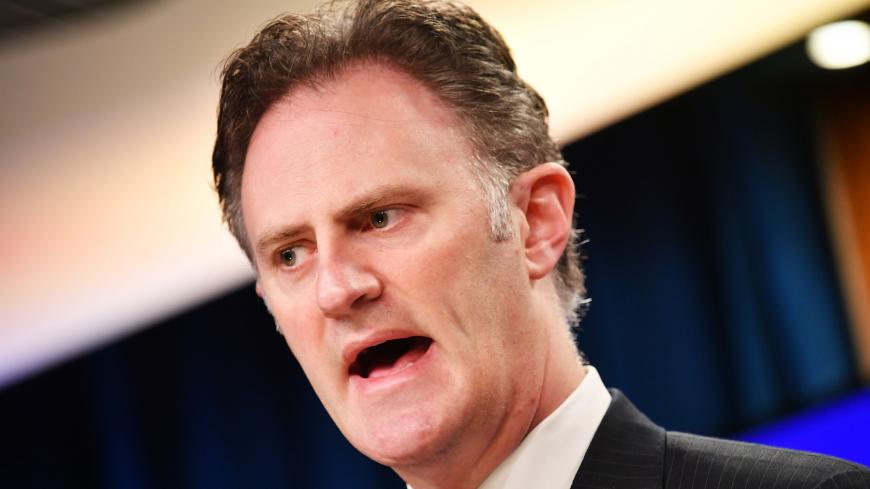 State Department Coordinator for Counterterrorism Nathan Sales speaks during a press conference at the State Department in Washington, on June 24, 2020. - MANDEL NGAN/POOL/AFP via Getty Images

A senior US official has accused Lebanon’s Hezbollah of stockpiling ammonium nitrate at sites in multiple European countries amid a push to get the European Union to designate the organization’s political wing as a terrorist group.

“Since 2012, Hezbollah has established caches of ammonium nitrate throughout Europe, by transporting first-aid kits whose cold packs contain the substance,” Sales told reporters on a conference call.

“I can also reveal that significant ammonium nitrate caches have been discovered or destroyed in France, Greece and Italy,” Sales said. “We have reason to believe that this activity is still under way. Ammonium nitrate caches are still suspected throughout Europe,” particularly in Greece, Italy and Spain, he said, providing no further details.

Ammonium nitrate is commonly used as a fertilizer but can be used as an explosive. A huge amount of ammonium nitrate being held at Beirut's port exploded last month, killing more than 200 and causing major damage to the Lebanese capital.

The EU designated Hezbollah’s military wing as a terrorist organization in July 2013, after Hezbollah members blew up an Israeli tourist bus in Bulgaria.

In 2015, the effects of the ruling were demonstrated when a Lebanese national named Hussein Bassam Abdallah was sentenced in Cyprus to six years in prison for participating in a terrorist group and plotting violence after it was discovered he had assembled more than 8 tons of ammonium nitrate.

The Trump administration is engaged in what it calls a "maximum pressure" campaign against Iran and the militias and organizations it supports abroad. The Trump administration unilaterally withdrew from the 2015 nuclear deal with Iran amid accusations Tehran had exploited the deal to expand its influence in the region via proxy militias and ballistic missile development.

The Trump administration has praised recent decisions by Lithuania, Kosovo and Serbia to designate Hezbollah as a whole as a terrorist group. Sales on Thursday also lauded moves by Argentina, Paraguay and Honduras to designate or ban the group over the last two years.

Earlier this week, the US Treasury rolled out sanctions on 47 individuals and entities that it said were likely associated with Hezbollah. The move followed sanctions on two former Lebanese officials accused of providing political favors to the group.

“Hezbollah itself has been perfectly clear, that they do not themselves recognize the distinction between their terrorist operations and so-called political branch," Sales said, adding, “Our sanctions against Hezbollah are and always have been directed at the entirety of the organization.”

“By starving these organizations of resources, you prevent them from committing acts of mass murder,” he said.