Israeli officials are disputing the militant group's claim that prison authorities have met the Palestinians' demands. 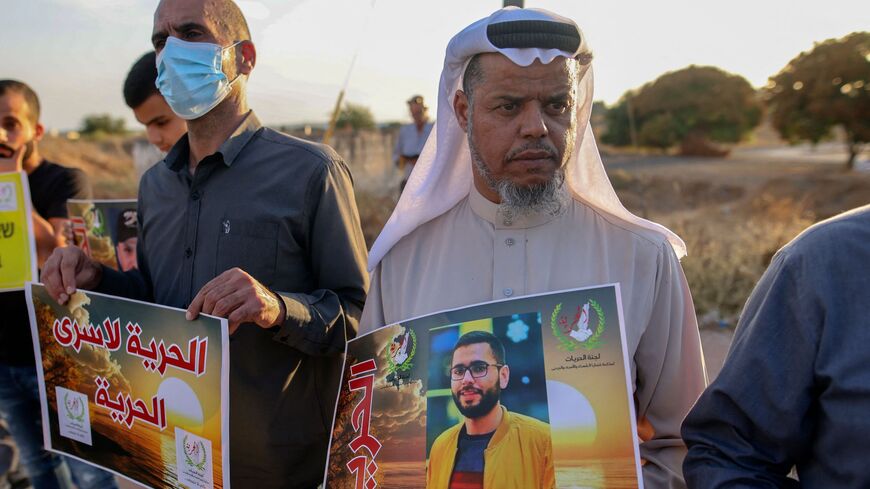 Israeli activists hold placards during a demonstration calling for the release of Palestinian administrative detainees including Miqdad al-Qawasmeh, whose health has deteriorated while on hunger strike for more than 80 days, outside the Kaplan medical center in the central city of Rehovot, Oct. 16, 2021. - AHMAD GHARABLI/AFP via Getty Images

The Palestinian Islamic Jihad militant group said Friday it was ending the collective hunger strike launched more than a week ago inside Israeli prisons after its demands were met.

“The prisoners decided to suspend the hunger strike after they scored victory against the administration of the occupation prison authorities,” said Islamic Jihad official Tareq Ezaddin.

Israel is currently detaining more than 4,600 Palestinians, more than 500 of them for life sentences. Following the escape of six Palestinian inmates from Gilboa Prison in northern Israel last month, prison officials have postponed family visits, separated groups of Islamic Jihad prisoners and moved others into solitary confinement in an effort to prevent another jailbreak.

The Associated Press quotes the Islamic Jihad group as saying that the Israel Prison Service had agreed to call off the financial penalties and relocation of the Palestinian detainees. But an unnamed Israeli prison official denied that any agreement had been reached.

A security official also told The Times of Israel that no negotiations had taken place, adding, “If something will change in the future, it has nothing to do with this.”

There was also disagreement over the number of prisoners involved in the nine-day hunger strike. Islamic Jihad put that number at 250, while the Israeli official said no more than 40 prisoners took part.

A group of six Palestinian inmates also launched a hunger strike to protest their “administrative detention,” a practice in which Israel holds detainees without charge.

A spokesperson for the advocacy group Palestinian Prisoners Club said Thursday that 24-year-old Miqdad al-Qawasmi is in “extremely dangerous” condition more than three months into his hunger strike. Al-Qawasmi was reportedly transferred to intensive care at an Israeli hospital earlier this week, where he is continuing to refuse food.

In a statement Thursday, UN human rights expert Michael Lynk slammed Israel’s administrative detention of some 500 Palestinians, including six children, and called for their immediate release or trial.