The case of Israel’s Prisoner X is drawing attention to other cases of Palestinians in Israeli jails, Daoud Kuttab writes. 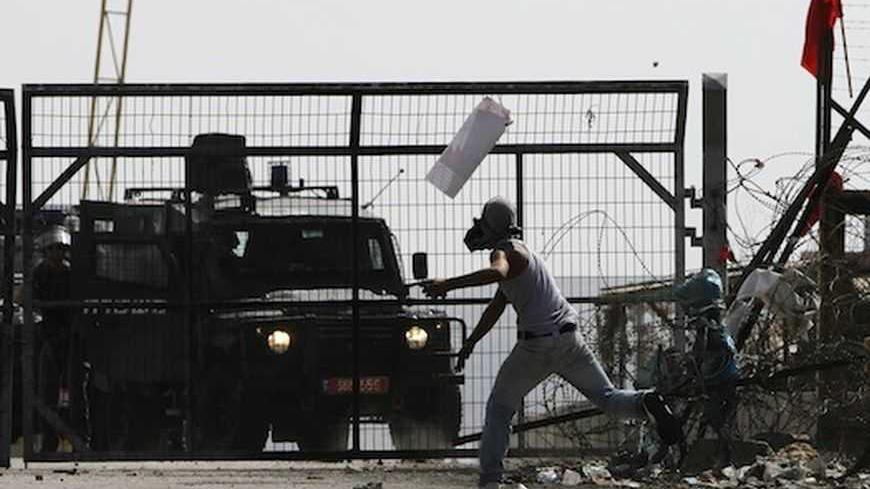 A Palestinian protester throws a stone towards Israeli security forces during clashes at a protest in solidarity with prisoners on hunger strike, outside Ofer prison near the West Bank city of Ramallah, Oct. 22, 2012. - REUTERS/Mohamad Torokman

The issue of Palestinians held in Israeli jails, and especially those held without being charged or tried, received a publicity boost this week from an unexpected source.

The revelation by Australian television of the disappearance of Ben Zygier, a dual Australian-Israeli citizen, and the accompanying self-censorship practiced by Israeli media, has once again put the limelight on the secret world of Israel’s prison system. The silence regarding the case has angered human-rights activists and has continued even after an Australian television investigation revealed that Zygier, who had been referred to as "Prisoner X," reportedly committed suicide in a high-security cell that is supposedly watched around-the-clock by prison officials. The story was finally published in Israel after three left-wing members of the Knesset, Zahava Gal-On, Ahmad Tibi and Dov Khenin, raised the issue.

In his weekly column in the liberal Israeli daily Haaretz, Gideon Levy picked up the story in an op-ed entitled “Dark Deeds,” and made the connection to Palestinian prisoners: "Okay, an Australian, and an investigative program in his country. And what about Arabs and Palestinians, who don't have an investigative reporting TV program on Channel 2? How many of them have been made to disappear and have disappeared, 'committed suicide' and died?"

Palestinian prisoners today are fighting an even more basic goal. Hunger-striking prisoners like Samer Issawi — whose continuous hunger strike defies nature — are demanding humane prison conditions and the right not to rot in prison without charge or trial.

The Palestinian Prisoners Society (PPS) reports that Israel is currently holding 4,600 Palestinians, including 182 children and 11 women. Their latest report indicates that 1,200 detainees are ill, including 20 who are continuously held at a prison clinic.

The PPS reported Wednesday (Feb. 13) that 360 Palestinian detainees at the Ramon Israeli prison, as well as detained Islamic Jihad leaders in all Israeli prisons and detention facilities, will hold a one-day hunger strike in solidarity with other hunger-striking detainees. The strike will be conducted on Thursday by returning meals, and is a first step towards additional protests in response to escalating Israeli violations.

While the general prisoner issue remains a major source of friction for Palestinians, Issawi's case has captured significant attention both in Palestine and outside. For more than six months, this prisoner from the Jerusalem neighborhood of Issawiya has been on a hunger strike. Of course, it hasn't been a full hunger strike because each time his health situation deteriorates, the Israelis take him to a clinic where he is clinically fed.

Photos of Issawi during a court appearance have been broadcast all over the world and have been converted into a graphic that supporters have used on their social-media accounts. Songs have been produced, cartoons have been drawn by respected cartoonists and demonstrations have taken place across the world, including outside BBC headquarters — all in protest of the continued administrative detention, without formal charges, of Issawi and other Palestinians, as well as the silence of the world press about their plight. Hashtags such as #palhunger and #samerissawi have also trended on Twitter.

It is unclear how much Palestinians will be able to leverage Zygier's case into attention to the plight of Issawi and other Palestinian prisoners. But there is no doubt that continued protests about a Palestinian prisoner held without charge or trial in Israel will continue to weaken Israel's claim to being the only democracy in the Middle East.