Israel has offered Samer Issawi deportation instead of release, which is a serious violation of human rights, Daoud Kuttab writes. 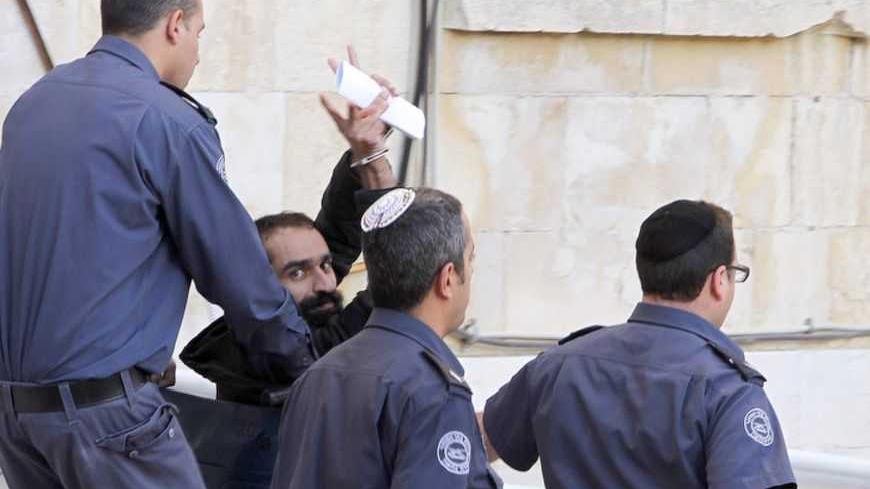 Samer Issawi, one of four Palestinians held by Israel who has been on an intermittent hunger strike, gestures as he leaves Jerusalem's magistrate court Feb 19, 2013. - REUTERS/Ammar Awad

The case of the hunger-striking Palestinian political prisoner Samer Issawi has returned to the spotlight one of the most notorious human rights violations by an occupying power: deportation. Israel has offered Issawi deportation rather than outright release, despite not being able to charge him or try him for a specific crime or infraction.

The idea of deporting a person from his or her country runs contrary to the very essence of the Universal Declaration of Human Rights, which stipulates the right of humans to leave their country and return without restrictions. For decades, Israel, which controls all the borders of Palestine, has been able to literally throw people across the hermetically sealed borders and prevent them from returning.

These deportations are based on the 112th clause of the mandate-era British Emergency Regulations (1945). The Israeli Knesset rescinded applying the regulations to Israel in 1979, but they remain intact for occupied Palestine, which is under Israeli military control.

According to the Israeli human rights group B'Tselem, 1,522 Palestinians were deported from the occupied territories between 1967 — the beginning of the Israeli occupation — and 1992. None of the deportees had been charged with a criminal offense or tried and convicted. By law, they must therefore be considered innocent of any offense.

The second Palestinian intifada, which erupted in late 2000, brought back deportation after Israel shelved the practice in the years following the 1993 agreement between the Palestine Liberation Organization and Israel. B'Tselem says that during the period 2002–2004, a total of 32 Palestinians were deported. The largest deportation in the post-Oslo period took place as a result the siege at the Church of the Nativity, which resulted in 13 Palestinians being deported to Gaza and various European countries. Israel has yet to allow any of these deportees return to the Bethlehem area, where they were born and where their families live.

The official reason for issuing a deportation order is to remove the danger represented by the deportee. In reality, however, deportation serves as a collective punishment aimed at chastising individuals for their political beliefs and thought rather than the supposed security threat that they are alleged to pose.

Legally, deportation orders are based on the sole discretion of the military commander, without the deportee having been convicted of any offense and without a prior judicial hearing in which evidence against him or her is presented to a judge.

Al-Haq, a Palestinian human rights group, says that the terms of these expulsions “violate Article 49 of the Fourth Geneva Convention,” which prohibits forcible transfers and deportations of protected persons, a proscription that is part of customary international humanitarian law. Unlawful deportation or transfer also constitutes a grave breach of the Fourth Geneva Convention and therefore qualifies as one of the most serious war crimes.

Ironically, the issue of deportation does not apply to Samer Issawi, because he is a resident of East Jerusalem and therefore, according to Israeli law, falls within the jurisdiction of civilian rather than military authority. Thus, instead of ordering Issawi’s deportation, Israeli security officials are offering Issawi ‘voluntary deportation.’ In other words, they are saying to him, we will release you from jail if you agree “voluntarily” to live in another country for a specified period of time.

Issawi, having seen what happened to the Church of the Nativity ‘voluntary’ deportees and others, knows that such a decision means a lifetime ban from seeing family, friends and one’s hometown.

Issawi, who has been on a hunger strike for 232 days, and other political prisoners have put Israel in a difficult position. Israel is quickly losing its deterrent capability by regularly holding Palestinians for months without charge or trial based on administrative detention orders. If they release Issawi and other hunger strikers, it will set a precedent. On the other hand, the hunger strike has captured the imagination of Palestinians and their friends abroad and will be a major embarrassment for Israel if it is not resolved before US President Barack Obama’s visit in two weeks. Palestinians see the deportation offer as a last ditch effort by a desperate Israel, and if they can hold on a little longer, the Israelis will release Issawi and friends.