The results of Iraq's Oct. 10 parliamentary elections came as a shock to political parties affiliated with the Popular Mobilization Units, as they lost more than half of their seats in parliament. 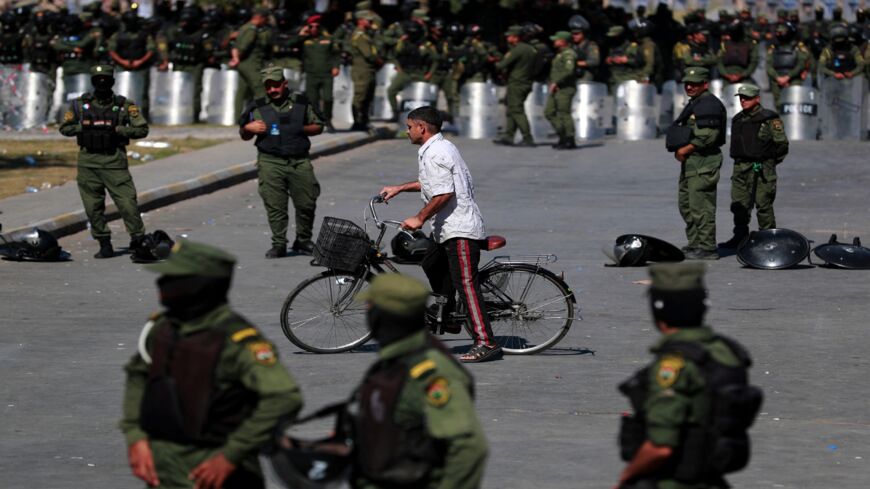 Members of the Iraqi riot police protect the Green Zone in Baghdad from supporters of the Hashid Shaabi alliance holding a sit-in nearby on Oct. 22, 2021. Iraq's October 10 elections reinforced the parliamentary strength of Shiite preacher Muqtada al-Sadr and saw a sharp decline in that of his adversaries, according to preliminary results. - AHMAD AL-RUBAYE/AFP via Getty Images

BAGHDAD — Supporters of political parties associated with militias which lost big in the last elections have been protesting for seven days now near the international Green Zone where most government buildings and foreign embassies are located.

Following the announcement of the Oct. 10 parliamentary election results, many supporters of the militias — unhappy with their leaders’ losses at the polls — took to the streets and claimed the elections were rigged against them.

The groups blamed parties such as the United Arab Emirates, the United Nations Assistance Mission for Iraq and the Independent High Electoral Commission for their loss, as well as Iraqi Prime Minister Mustafa al-Kadhimi due to — in their words — his "suspicious" role in organizing the elections.

The European Union responded in a statement: “Such violent manifestations have no place in a democracy. The EU recalls that voting on Iraq's election day was largely peaceful, orderly and well-organized, and voters were able to freely express their will, as assessed by the EU Election Observation Mission.”

The electoral commission encouraged candidates and the people to go through the legal process and apply for an appeal or file a complaint. Since then, the commission has received 1,436 appeals from different political parties and independents, from which 816 have been processed. Of those processed appeals, 790 of them have been deemed invalid and 26 accepted. The 26 accepted appeals set in motion the manual recount of around 300 ballot boxes in different provinces across the country.

Nevertheless, Iraqi militias still demanded a manual recount of all the ballots even after 5% of the votes were manually counted and verified. According to Iraq's electoral law, it is illegal to manually recount the ballots when 5% has been verified

The same militias that accused the Tishreen protestors of disorder and vandalism are now doing the same.

Although the militias have blamed others for their own shortcomings at the ballot boxes, when we look at the detailed election results, we see mismanagement as their biggest failure that prohibited them from taking advantage of the new election law, in addition to electoral trends which have given a larger role to independents.

Unlike Sadrist coalition, who took full advantage of the new electoral districts established by the law to claim 73 seats, the Fatah Alliance didn't change its approach to the campaign.

For example, Fatah received 20,000 more votes than Sadrists yet received nearly a quarter of the seats the Sadrist party did. What made it worse is that the Popular Mobilization Units (PMU) had other electoral lists in addition to the Fatah Alliance. This includes the Huqooq Movement, which is affiliated with Katayib Hezbollah, and Al-Aqd al-Watani, which is affiliated with PMU head Falih al-Fayadh.

Sadrists only received 650,000 votes. The Fatah Alliance earned 670,000 votes and yet lost many seats to Sadrists due to pool sharing of the votes among themselves. This is due to the Fatah Alliance nominating many candidates in one district, wherein Sadrists put forward only one candidate in the same district.

This resulted in the Sadrist candidate gaining more votes than any other candidate, wherein Fatah Alliance candidates were competing with each other for the same voter base. This can be seen in several electoral districts.

The same pattern can be seen in Dhi Qar’s second district. The Sadrist candidate got 6,996 votes, and the State of Law Coalition candidate got 8,297 votes. Each had one candidate, and each won one seat. The Fatah Alliance and its abovementioned affiliates failed to secure any seat, even though their combined votes was over 10,000.

Other political forces, such as the National State Forces Alliance led by Ammar al-Hakim, made the same mistake. For example, in District 1 of Najaf, five seats were available. Nouri al-Maliki’s State of Law Coalition candidate received 8,330 votes and managed to secure one seat. In this same district, the National State Forces Alliance had a total of four candidates earning 11,872 votes, but it did not win any seats because the votes were shared among the four candidates. Had they put forth only one candidate, they would have had a better chance to win a seat.