Israeli officials see diminishing prospects for a return to the 2015 nuclear deal, even if Iran sends negotiators back to Vienna. 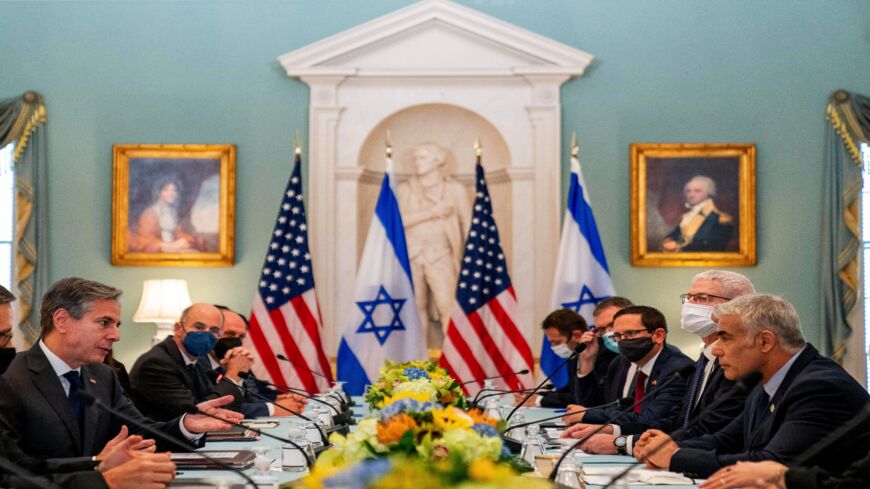 Israeli officials visiting Washington this week discussed what they see as a need to apply more pressure on Iran as the window of opportunity continues to close for the United States to return to the 2015 nuclear agreement with Tehran.

Even if Iran sends negotiators to the table in Vienna, Israeli officials worry the new hard-line government will continue to throw in additional demands, delaying the talks further as Iran continues its steps toward nuclear weapons capabilities.

Israel’s Foreign Minister Yair Lapid held “very intimate” discussions with US officials this week on what could be done if progress falters, a senior Israeli official told reporters in Washington today, but the two sides did not discuss specific contingency plans or military options in any detail.

“I don’t think that’s where we are yet,” the Israeli official said on condition of anonymity.

Axios first reported that Lapid’s delegation urged US officials to prepare additional sanctions against Tehran and that the two sides agreed to coordinate on ways to increase pressure.

“The more effective diplomacy you have, the more effective forms of pressure one has, the need for other things to be done declines," the official said, in apparent reference to Israel’s unclaimed acts of sabotage against Iran’s nuclear program.

Why It Matters: The Biden administration is hesitant to risk undermining Iran's return to the talks, the last round of which was held in June, and reluctant to take any action that could lead Tehran to accelerate its enrichment.

But there is little outward sign that Israel's use of its own pressure tactics will abate. "One might even argue they strengthen diplomacy," the official said.

Iran's government accelerated uranium enrichment after a suspected sabotage attack on a nuclear facility northwest of Tehran in June. The Iranian government blamed Israel for the incident.

Elsewhere in the region, Israeli airstrikes against Iranian-linked sites in Syria picked up this week, drawing hostile response from Tehran-backed militias there.

Last week, Foreign Minister Lapid visited Bahrain for the first time since the Arab Gulf kingdom agreed to normalize ties with Israel last year. While there, he also toured the headquarters of the United States' Fifth Fleet, the Iranian navy's main adversary in the Persian Gulf.

“They are becoming more and more edgy,” the senior official said of Tehran’s reaction to the visit and to Iran's recent spike in tensions with Azerbaijan.

“It is important to give them the feeling of encirclement,” the official said.

What’s Next: Expect more meetings between top US, Israeli and Arab Gulf officials in the coming week as they move to coordinate the next steps. Iranian officials say their side will return to the talks soon, but their American counterparts aren't holding their breath.

Know More: Ben Caspit breaks down some of the concerns inside the Israeli Defense Ministry over coordination with the United States on Iran.