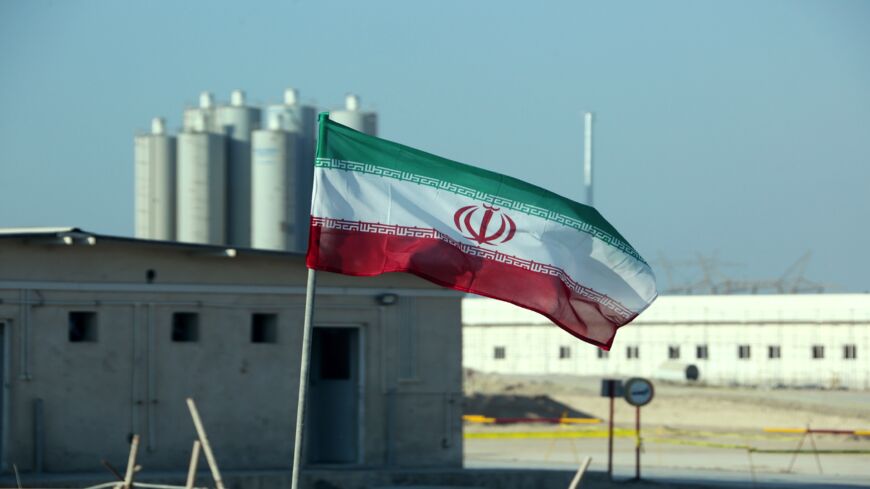 A picture taken on Nov. 10, 2019, shows an Iranian flag at Iran's Bushehr nuclear power plant during an official ceremony to kickstart works on a second reactor at the facility. - ATTA KENARE/AFP via Getty Images

The Israeli military’s chief of staff said operations targeting Iran’s nuclear program will continue, rebuffing a demand by Tehran that they halt if the United States and the United Nations want inspections of Iranian nuclear facilities to continue.

"Operations to destroy Iranian capabilities will continue, in any arena and at any time, and the operational plans against Iran’s nuclear program will continue to be developed and improved,” IDF Chief of Staff Lt. Gen. Kochavi said Tuesday.

Kochavi’s comments came a day after the Israeli prime minister’s office accused Iran of being behind an assassination attempt on wealthy Israeli businesspeople in Cyprus last week.

Tehran — which has accelerated progress on its nuclear program since the Donald Trump administration abandoned a 2015 international agreement with Iran — denied UN inspectors’ access to a site last month, which it said was hit by Israeli sabotage.

“If the [UN’s International Atomic Energy] Agency wants to conduct inspections, it has to act on its own responsibilities and clearly condemn terrorist attacks against Iran’s technological centers,” an Iranian representative to the nuclear talks in Vienna said last week.

"If America and its Western allies want the continuation of the agency’s inspections, they have to stop the Zionist regime’s terrorist attacks,” said the representative, Kazem Gharibabadi, according to Tasnim News Agency.

Israeli officials have only hinted vaguely at responsibility for a series of what Iran says are sabotage attacks against its nuclear production sites.

In June, cameras said to be storing key data were disabled at the Karaj nuclear facility. A series of apparent sabotage incidents have also hit other Iranian nuclear facilities.

Last November, the man believed to be Tehran’s top nuclear scientist was gunned down in his car north of the capital. Iran’s government blamed Israel.

Iran agreed in 2015 under international pressure to strictly limit its nuclear enrichment and allow open international inspections under the international agreement, known as the Joint Comprehensive Plan of Action.

But former US President Donald Trump’s administration walked out of the deal in 2018, replacing it with a campaign of punishing economic sanctions aimed at forcing Tehran to curtail its support for militias throughout conflict zones in the Middle East.

US President Joe Biden vowed to return to the deal after tensions between Israel and the United States on one side and Tehran on the other nearly brought about open conflict in early 2020.

US intelligence has assessed that the abandonment of the 2015 deal and imposition of sanctions did not change Iran’s calculus about its strategy in the region.

Renewed talks over a return to the accord began earlier this year in Vienna, albeit indirectly between Washington officials and their Iranian counterparts.

The talks have stalled since the election of Iran’s new president, Islamic hard-liner Ebrahim Raisi. Raisi’s government has said it intends to return to the talks "soon," but has floated other demands before doing so, including that the US lift sanctions first.

The Iranian side has insisted its ballistic missile program and support for regional militias — seen as Tehran's alternate and secondary deterrent to having nuclear weapons — not be part of the negotiations.