A spokesperson for the European Union pushed back on the Iranian Foreign Ministry's claim that Iranian officials would be meeting with EU counterparts on Thursday. 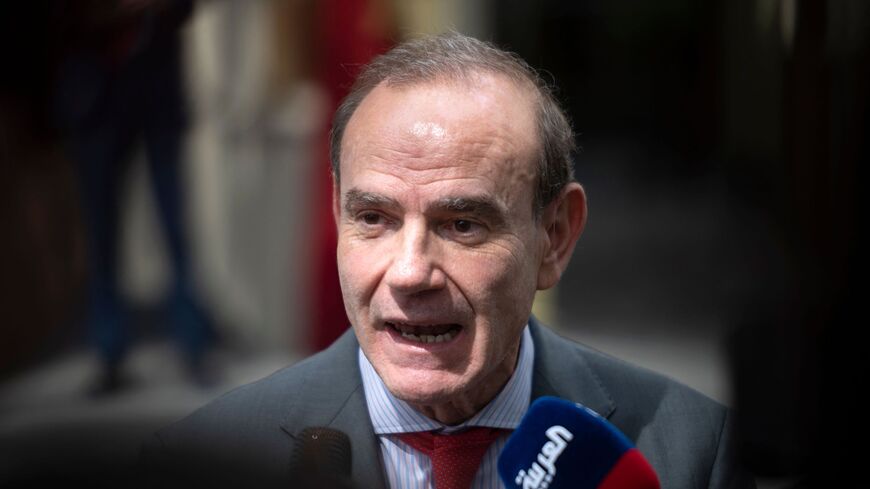 European Union Political Director Enrique Mora speaks to journalists after the closed-door nuclear talks in Vienna on June 20, 2021, where diplomats of Britain, the EU, China, Russia and Iran hold their talks. - JOE KLAMAR/AFP via Getty Images

The European Union on Monday denied reports that the bloc planned to meet with Iranian officials on Thursday in an effort to revive the stalled nuclear deal talks.

"There will not be a meeting Thursday,” EU spokeswoman Nabila Massrali told AFP. "At this stage we cannot confirm if or when a meeting will take place."

Chief EU diplomat Josep Borrell didn't confirm a meeting in the Belgian capital but expressed optimism on Monday that the nuclear negotiations would soon resume.

“You never know. I am more optimistic today than yesterday,” Borrell said, according to Reuters. “No confirmation yet, but things are getting better, and I hope we will have preparatory meetings in Brussels in the days to come.”

Of a possible EU-Iran meeting, Legendre said "these exchanges cannot replace the negotiations in Vienna with the other participants in the JCPOA and the United States.”

Multilateral negotiations aimed at reviving the Joint Comprehensive Plan of Action (JCPOA) began in April, but have been on hold since the election of hardline Iranian President Ebrahim Raisi in June. In recent weeks, Iranian officials have expressed a willingness to return to Vienna for a seventh round of talks, but have declined to give a date.

European Union political director Enrique Mora met with Bagheri last week in Tehran in an effort to "raise the urgency" on resuming the Vienna negotiations. Following Mora’s visit, the Iranian foreign ministry said that it agreed to hold discussions with the EU in Brussels.

"I know that the Iranians want to have some kind of previous talks with me as coordinator and with some members of the board of the JCPOA,"  Borrell said during his visit to Washington on Friday. "I cannot tell you a precise date. I am ready to receive them, if needed.”

President Joe Biden made joining the JCPOA, which offered Iran sanctions relief in exchange for constraints on its nuclear program, a campaign promise. Since former President Donald Trump abandoned the nuclear accord in 2018, Iran has gradually violated its commitments under the JCPOA. In April, Tehran announced it was enriching uranium to 60% purity, a major violation of the deal that brings the country closer to the 90% needed for a weapon.

The Biden administration maintains that diplomacy is the best way to bring Iran back into compliance with the accord but in recent weeks has signaled there are “other options” should Iran not change course.