The envoy's visit came at a "critical" time as the Iranian side continues to remain vague on the timing of the talks over the revival of the nuclear deal. 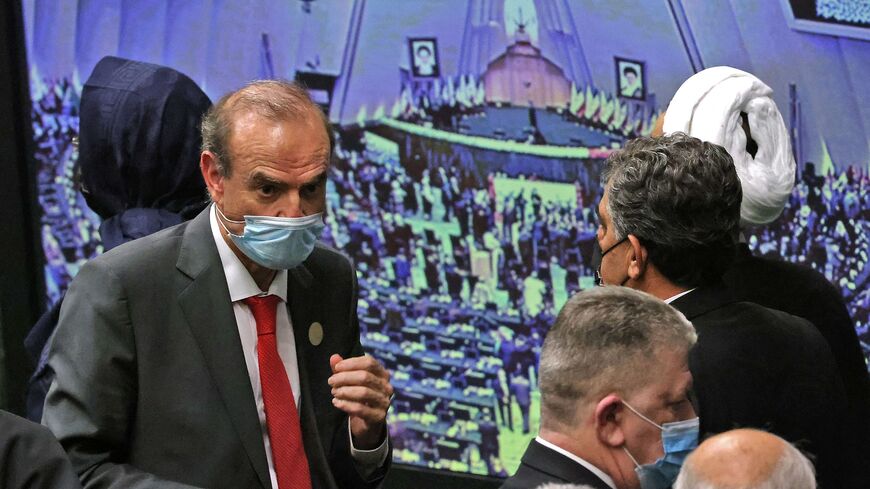 One of the European Union's senior diplomats, Enrique Mora, was in Tehran Oct. 14 to promote restarting the long-halted negotiations on restoring the Iran nuclear deal known as the Joint Comprehensive Plan of Action (JCPOA).

Iranian media outlets reported that Mora sat down with Deputy Foreign Minister Ali Bagheri to discuss a range of issues including Tehran-EU ties, the Afghanistan crisis and the removal of sanctions against the Islamic Republic.

Prior to his arrival, Mora announced that his trip came at a "critical point in time" and that he would "raise the urgency" on resuming the Vienna talks, which were meant to bring the United States back into the deal and Iran back into full compliance. After six rounds in the Austrian capital, however, the meetings were adjourned in June, coinciding with a moment of transition in Iran as hard-line President Ebrahim Raisi took the helm, replacing his moderate predecessor Hassan Rouhani.

The transition in Tehran has meant the departure of the nuclear negotiating team led by former Foreign Minister Mohammad Javad Zarif, who was one of the architects of the 2015 accord.

While the new Iranian president has asserted that he will not tie the health of Iran's troubled economy to negotiations on sanctions removal, his government has vaguely declared that it will return to the negotiating table "soon."

Bagheri's agenda in his meeting with Mora contrasted with the EU diplomat's pre-departure statement, which laid out his specific focus on the JCPOA. The Iranian insistence on broadening the negotiations to other issues such as Afghanistan was reminiscent of the negotiation style pursued by the hard-line team prior to the inauguration of the moderate administration and the 2013 JCPOA talks. Bagheri was a leading member of that team in its marathon negotiations with Western powers.

As Iran has been taking its time weighing options, European and American diplomats continue to push for picking up from where they left off in Vienna. The Iranian and American negotiators were stuck on contentious issues such as how to verify that sanctions are lifted. The American negotiators, on the other hand, sought to roll back Tehran's nuclear program to its pre-deal status. The Islamic Republic is accused of trying to escalate the situation by raising its uranium enrichment levels in breach of its obligations under the JCPOA, but Tehran argues that its phased "commitment reduction" is a response to the Western sides' failure to honor their JCPOA obligations.

The United States has repeatedly expressed its desire for a speedy return to the talks. Nevertheless, it has also raised concern over what it believes to be Iran's lack of seriousness. Only a day before Mora's visit to the Iranian capital, America's top diplomat Antony Blinken was hosting his counterparts from Israel, Tehran's sworn enemy, and the UAE, one of Iran's regional rivals. Standing next to the two, Blinken issued his latest warning to the Islamic Republic that time is running short.

As Washington strove to coordinate its next moves with regional partners, US envoy on Iran Robert Malley was set to embark on a trip to the UAE, Qatar and Saudi Arabia. Malley has also spoken of "all options" in the event of Iran's refusal to return to compliance with JCPOA constraints, a message that could ratchet up the already escalating rhetoric between the two sides.