Tehran has dismissed expectations of a breakthrough as a top EU diplomat makes a last-ditch effort in Tehran. 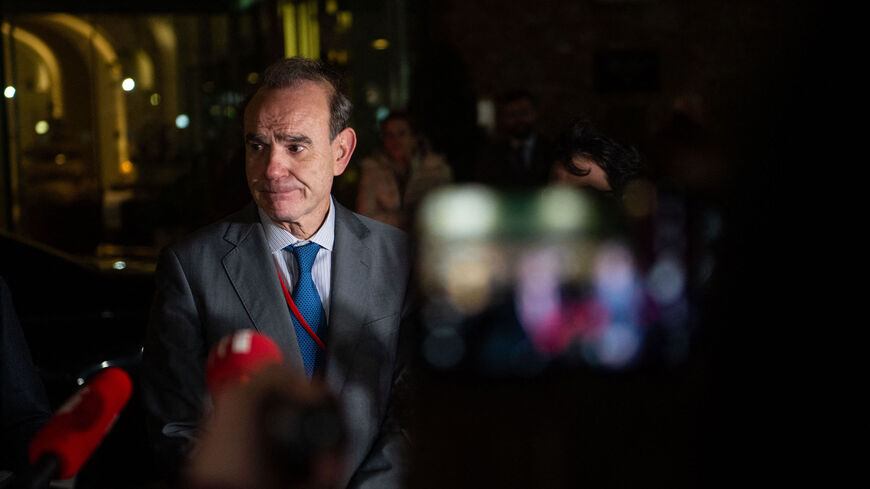 Deputy Secretary General of the European External Action Service Enrique Mora speaks to journalists in front of the Palais Coburg after a meeting on the Joint Comprehensive Plan of Action in Vienna, Austria, on Nov. 29, 2021. - VLADIMIR SIMICEK/AFP via Getty Images

The European Union dispatched to Tehran its coordinator on the talks on reviving the Iran nuclear deal in an effort to bring the sides back to the negotiating table.

Following a two-month pause, senior EU diplomat Enrique Mora came to meet with Iran's top nuclear negotiator Ali Bagheri Kani on May 10 and pick up from where the sides left off in Vienna.

Mora's boss, EU foreign policy chief Josep Borrell, has declared that the push is "the last bullet" for breaking the impasse that saw diplomats from Iran, the United States, Germany, France, the United Kingdom, Russia and China return to their capitals.

Prior to Mora's arrival, Iran's Foreign Ministry spokesperson Saeed Khatibzadeh announced at a Monday briefing in Tehran that the EU diplomat is to serve as a messenger and that "a new development is not supposed to occur."

Yet US officials have expressed some optimism. "He has continued to convey messages back and forth," State Department spokesperson Ned Price told a presser on Monday. Price added that the European diplomat had Washington's blessing for "his efforts to bring these negotiations to a successful conclusion" on resurrecting the Joint Comprehensive Plan of Action (JCPOA).

The apparent reluctance of both the Islamic Republic and the EU to release the details of Mora's agenda left room for analyses in the Iranian media on how Mora could reverse the course and whether he is carrying "the key to unlock the nuclear impasse," read an editorial in Faraz Daily.

The pro-Reform daily Shargh highlighted speculation that Mora is seeking to persuade Iranian authorities to drop their demand for the United States to take the Islamic Revolutionary Guard Corps (IRGC) off its list of foreign terrorist organizations. The Islamic Republic has been adamant that the move be a condition for a revived JCPOA and compliance with its obligations under the accord.

The Reformist Ebtekar newspaper noted that Mora's mission could be indicative of "Europe's resolve to work out a solution independent from the US approach" at a moment when the JCPOA is on "life support." With the Mora visit being "perhaps the last chance," the editorial suggested, the fate of the 2015 accord might be pinned to mediators in last-ditch attempts to convince the Iranian side.

Elsewhere, Jahanbakhsh Izadi, an international affairs analyst with conservative leanings, told the ISNA news agency that unless Mora has brought a new initiative, his visit will yield no results.

"But if the Europeans are willing to offer concessions to Iran and allow it to benefit from sanctions relief, they could be heading toward an agreement," he said.