Israel suspects that a plot to kill Israeli businesspeople in Cyrus reflects an alarming change in Iranian strategy. 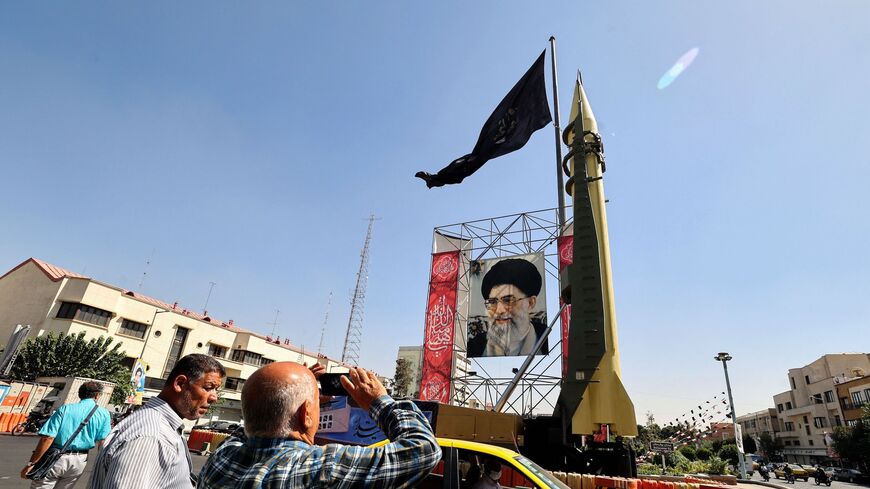 A Shahab-3 surface-to-surface missile is displayed next to a portrait of Iranian Supreme Leader Ayatollah Ali Khamenei at a street exhibition by Iran's army and paramilitary Islamic Revolutionary Guard Corps marking the 41th anniversary of the start of 1980-88 Iran-Iraq War at Baharestan Square in Tehran, on Sept. 25, 2021. (Photo by Atta KENARE / AFP) (Photo by - ATTA KENARE/AFP via Getty Images

There were two developments in Israel’s shadow war with Iran at the start of this week. On Sunday, Oct. 3, reports emerged that an armed Azeri hit man had been sent to assassinate Israeli business people in Cyprus. Israeli politicians pointed the finger at Iran. The next day, addressing the opening of the Knesset’s winter session, Prime Minister Naftali Bennett revealed that the Mossad had recently carried out a wide-ranging, daring operation in a bid to obtain information on the whereabouts of Israeli aviator Ron Arad, whose plane was shot down over Lebanon in October 1986 and is believed to have been handed over to Iran. Despite the passage of time and the unlikely prospects that Arad is still alive, Israel continues its efforts to find out what happened to him.

The link between these two events is clear: The game Israel and Iran have been playing since the 1979 Islamic Revolution is one of the strangest and most complex in the history of great Middle Eastern rivalries. What was previously indirect and clandestine is gradually emerging into the open, becoming daring and provocative.

Iran’s reported attempt to assassinate Israeli business people on Cyprus marks another milestone of this game's deterioration and sets off alarms. Is Iran's policy shifting? Is Tehran under new President Ebrahim Raisi abandoning its characteristic caution and avoidance of direct military engagement?

Cyprus has for years been a hub for Israeli business people, living and working on the island just a short flight away from home. Various deals have been finalized there between Israel and countries with which it does not have diplomatic relations in order to bypass diplomatic hurdles and arms export controls. Over the past weekend, a small group of Israelis took off from Cyprus in the private plane of Israeli-Cypriot billionaire Teddy Sagi. It appears that the hired gun had crossed into Cyprus from the Turkish-controlled part of the island with a Russian passport.

A foreign intelligence agency, possibly the Mossad, is believed to have warned Cypriot police of the impending attack. Several weeks ago, a similar incident occurred in the Colombian capital of Bogota, forcing two Israeli business people to flee their homes after an intelligence warning was conveyed to local authorities about plans to harm them.

According to Israeli assessments, Iran is stepping up efforts to retaliate for various operations it has attributed to Israel such as the November 2020 assassination of leading Iranian nuclear scientist Mohsen Fakhrizadeh. “On the other hand,” a senior Israeli intelligence source told Al-Monitor on condition of anonymity, “these attempts are still highly amateurish and they reflect the absence of a real Iranian operational infrastructure in the region. Let’s hope it stays that way.”

Iran's operational capabilities are still low, but have its policy directives changed? Knesset member Ram Ben-Barak of the Blue and White Party, chair of the Knesset’s Foreign Affairs and Defense Committee, a former deputy Mossad director and veteran of Israeli operations against Iran’s nuclear program, told Al-Monitor that the Iranians are as sensitive to human losses as the Israelis and therefore often use proxies to carry out their operations. Nonetheless, Ben-Barak added, Iran has been increasingly daring, the apparent work of the Islamic Revolutionary Guard Corps and Raisi. Although a member of Bennett’s coalition government, Ben-Barak was somewhat critical of the prime minister’s decision to expose a clandestine operation on the Knesset podium. “Unlike previous prime ministers, he did not reveal secrets or cause operational damage,” Ben-Barak emphasized, “but my views on these matters are well known: Mossad activities should remain secret and anonymous.”

Either way, Israel is monitoring Iran's evolution with growing concern. The July 2021 drone attack on the Israeli-operated Mercer Street tanker that killed two crew, the major Iranian military drill on the Azerbaijan border this week, the public and violent IRGC attacks on Kurdish militants in Iraq and the general rhetoric by top Iranian officials are prompting concern that the Iranians’ well-known aversion to a public clash with Israel or other rivals is weakening.

Israel perceives greater chances of an open clash with Iran, though the risk is still categorized as low. But Iran’s desire to respond to reported Israeli operations seems to be growing as its own aggressive activities around the world are exposed. According to former senior military intelligence officer Danny Citrinowicz, a recent guest on Al-Monitor’s “On Israel” podcast, “Iran still has beef with Israel. Raisi's election and the strengthening of the Revolutionary Guards in the decision-making process in Iran will only encourage the continued carrying out of these attacks.” Citrinowicz added that the presidency and the IRGC are seeing the situation eye to eye now that former President Hassan Rouhani left office.

This consensus probably fueled the dramatic military tensions on the Iran-Azerbaijan border. Tehran is following with great concern reports about the increasingly close ties between Israel and Azerbaijan, which serves as a sort of peep hole into developments in Iran. Israel reportedly provided significant military aid to the Azeris in their 2020 conflict with Armenia over Nagorno-Karabakh. The Azeris, for their part, were none too pleased with the discovery of Iranian terror cells on their soil that were apparently targeting Israeli interests there. When Azerbaijan recently announced a major joint military exercise with Turkish and Pakistani forces, Iran deployed a major buildup along the border, further exacerbating tensions.

Israel does not expect the Iranian-Azeri crisis to deteriorate into open hostilities, but the many Iran-related fronts, frayed nerves and Rouhani’s replacement with the far more radical “hangman of Tehran,” as Bennett has referred to him, are prompting concern in the West that Iran is becoming more determined and less fearful, which isn't good news for anyone.