A Turkish law passed in 2006 to tackle money transfers to tax havens remains inapplicable on the ground due to Ankara’s failure to name the countries it considers as tax havens. 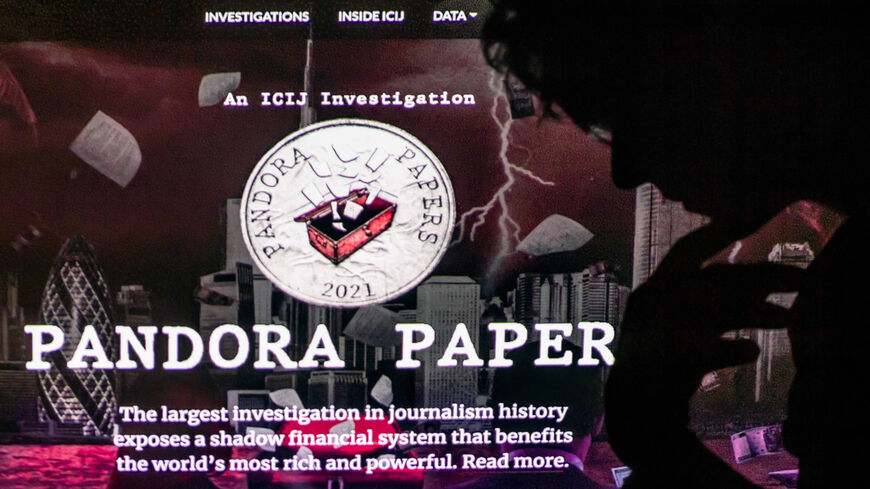 This photograph illustration shows a woman's shadow cast on the logo of The Pandora Papers, in Lavau-sur-Loire, western France, Oct. 4, 2021. - Loic Venance/AFP via Getty Images

How the rich and the powerful dodge taxes through shell companies in tax havens is back under international spotlight after a huge leak of financial documents last week. The Pandora Papers, comprised of some 12 million files, have exposed the tax haven links also of prominent Turkish companies such as the Ronesans, Calik and Cengiz holdings, which are close to President Recep Tayyip Erdogan and have thrived on public projects under his rule.

A similar leak in 2017 had shown that others from Erdogan’s inner circle, including relatives of his son-in-law and the then-prime minister, had set up companies in Malta that enabled them to avoid paying taxes in Turkey. The revelations led to no legal consequences at the time and the new ones are not expected to be any different, as Turkey remains without functional legislation to discourage money transfers to tax havens. Such transactions have continued unobstructed as Ankara looks the other way despite a 2006 legal amendment designed to curb the flow of money to tax havens.

Tax havens, or offshore financial centers, are generally countries or places where foreigners enjoy lax rules to set up companies amid minimal tax liability, often coupled with a financial secrecy shield, which lay the ground for firms and individuals to avoid or evade paying taxes on revenues they have earned elsewhere. Many firms set up in such jurisdictions are shell companies used for schemes to dodge taxes in home countries and stash away wealth.

To curb the loss of tax revenues that could otherwise benefit public education, health care or social welfare programs, many countries and international organizations have introduced measures to tackle the phenomenon. The European Union and the Organization for Economic Cooperation and Development, for instance, have published lists calling out countries that encourage abusive tax practices or refuse to make commitments to transparency and exchange of tax information. On the national level, governments have resorted to withholding tax measures in a bid to penalize tax dodging via tax havens.

Turkey took a similar step in 2006, adding a provision to its corporate tax law that stipulates a 30% withholding tax on money transfers to tax havens. To make the provision applicable on the ground, the government was supposed to draw up a list of the jurisdictions it considers as tax havens, based on criteria such as harmful tax competition practices and reluctance to exchange information. But 15 years on, Ankara has yet to produce a list. Its failure to name tax havens means that Turkey has continued to lose tax revenues despite enacting a law to stop exactly that. The loophole is believed to have helped also the recipients of bribes and nepotistic kickbacks to stash their illicit earnings abroad.

The tax havens most popular with Turks could be guessed by the worth of Turkish-founded companies’ investments in such places. According to central bank data, Malta tops the list. Turkish investments in Malta reached some $2 billion last year, up from $24 million in 2001. The Mediterranean island-state, which is an EU member and is not officially blacklisted as a tax haven, offers a highly favorable tax regime to foreign companies, including a corporation tax rate of as low as 5%. Turkish maritime companies, in particular, have been attracted to Malta.

In the Paradise Papers, another trove of leaked documents reviewed and reported by an international team of journalists in November 2017, Serhat Albayrak — brother of Berat Albayrak, Erdogan’s son-in-law and former energy and finance minister — was named among Turkish nationals with offshore links. The Turkish daily Cumhuriyet, which was part of the investigative team, reported that scores of companies with links to Calik Holding were set up in Malta, when the two Albayrak brothers ran the conglomerate, to avoid taxes at home.

The authorities sought to gag the expose, blocking access to websites carrying the reports, while journalists and newspapers faced lawsuits for defaming those named in the revelations. Pelin Unker, the journalist who reported the Paradise Papers for Cumhuriyet, stood a lengthy trial before the court dismissed the case in March 2019.

Tax injustice has been a chronic problem in Turkey. Two-thirds of the government’s tax revenues come from indirect taxes on consumption. And the bulk of direct tax revenues come from payroll taxes paid by more than 30 million wage earners and pensioners. Companies contribute only about 10% of all tax revenues. Along with the wealthy, companies are able to reduce their tax burden through various tax avoidance and evasion methods. The use of tax havens is only one of them, and the more it is exposed the more the public's rightful indignation becomes apparent.

Editor's Note: This piece was updated on Jan. 26, 2022 to correct the amount of Turkish investments in the cited countries and territories.