Popular Turkish Prime Minister Binali Yildirim denies any wrongdoing after his close family members appeared in the Paradise Papers that list companies and individuals who shield their wealth in offshore tax havens. 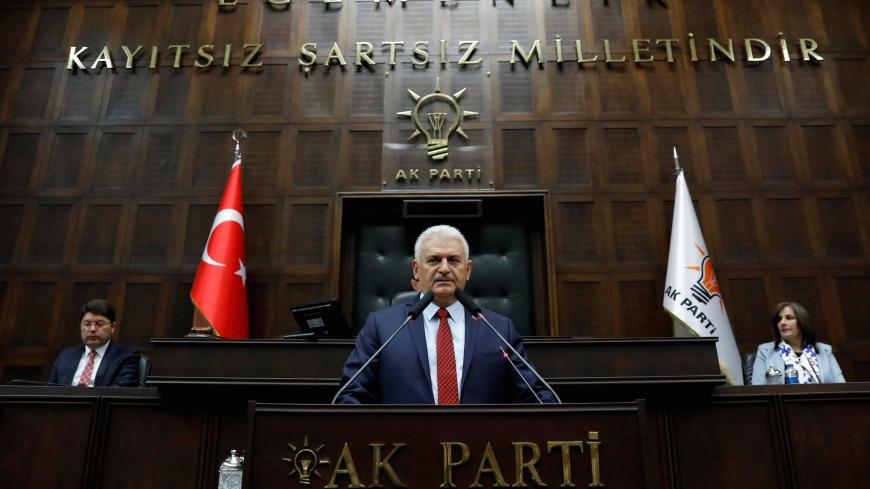 Turkey's Prime Minister Binali Yildirim addresses members of parliament from his ruling Justice and Development Party during a meeting at the Turkish parliament in Ankara, Turkey, April 18, 2017. - REUTERS/Umit Bektas

Turkish Prime Minister Binali Yildirim’s family is among the rich and powerful named in the latest dump of confidential documents, according to Cumhuriyet, the only Turkish news outlet that collaborated in the international investigation.

Yildirim’s family, including his two sons, were found to have investments in Malta enabling them to avoid paying taxes in Turkey, the newspaper said this week. They join a list of sundry figures like Queen Elizabeth, U2 front man Bono and US Secretary of State Rex Tillerson as well as corporate giants, who have used offshore companies to hide their wealth, according to data taken from the Bermuda-based law firm Appleby Group. More than 13 million documents were leaked in the latest trove, dubbed the Paradise Papers.

Such tax avoidance is technically legal, experts said, but the news raises questions about the ethics of elected officials or celebrities seeking tax havens not widely available to the general public and comes at a time when many are deeply frustrated that the super-wealthy do not pay their fair share.

The popular Yildirim, who served as transportation minister before taking over a top government post last year, said the report was an attempt to create “a perception” around him, though he did not deny the existence of the investments.

“These are companies whose activities are open and clear,” Yildirim said at a news conference on Tuesday before traveling to the United States for an official visit.

“When I entered politics, I left my business to my children. They do their job and I do mine. I recommended that my children never work with the state nor borrow money from state banks. Maritime is an international business, and they work everywhere around the world. There is nothing secret or hidden,” Yildirim said.

Malta’s corporate tax rate for foreign companies is 5%, compared with a 20% or higher rate for business profits in Turkey.

Yildirim’s sons Erkam and Bulent have registered companies in Malta, and Erkam is the director and main shareholder. At least one of the companies is involved in the buying and selling of ships, yachts and other marine vessels, as well as their financing. One firm is linked to an Istanbul-based entity whose shareholders have won state contracts from the Transportation Ministry, Cumhuriyet said.

Other Yildirim relatives are involved in three more companies registered in Malta, and still other relatives and friends with companies based in Turkey have links to firms in Malta, the paper said.

It also said separate documents showed Erkam Yildirim won a $7 million government tender this year, despite the prime minister’s recommendation that his children avoid doing business with the Turkish state.

Yildirim told reporters he was willing to be subjected to “all financial and legal investigations” in the matter.

Parliament’s third-biggest party, the Peoples’ Democratic Party (HDP), has submitted a motion for an investigation, and the main opposition Republican People’s Party (CHP) has said it too will submit a proposal to look into the offshore wealth of elected officials and their relatives.

“As the government seeks to stop the Turkish economy’s downward trend, it has raised taxes on citizens, turning it into a ‘tax hell.’ Tax increases have reached 40%, unsettling the public, while the names of those close to the president, prime minister and other high-level politicians appear in the documents of a ‘tax paradise,’ wounding the public’s conscience,” wrote HDP group deputy chairwoman Filiz Kerestecioglu in the motion, according to an emailed copy obtained by Al-Monitor.

Aykut Erdogdu, the CHP’s deputy chairman, said Yildirim’s call for an investigation was a direct challenge to President Recep Tayyip Erdogan, who dismissed Yildirim’s predecessor after he spoke out against corruption.

Cumhuriyet found the names of Turkish Energy Minister Berat Albayrak, who is Erdogan’s son-in-law, and his brother Serhat Albayrak in the Paradise Papers. Dozens of offshore companies were allegedly set up with links to Calik Holding, a Turkish energy-to-textiles conglomerate, when Berat and Serhat were running the Istanbul-based company, it said. Serhat is listed as the director of one Malta-based firm that is no longer active and whose activities were never included in Calik’s financial reports, it reported.

In total, 93 Turkish people and companies appear in the Paradise Papers, according to Cumhuriyet.

On Wednesday, Cumhuriyet reported that hotel developer Fettah Tamince, known for declaring his love for Erdogan, has offshore companies in Malta and the Virgin Islands that he allegedly used to avoid paying taxes on his hotel investments.

Coverage of the Paradise Papers has been scant in the Turkish press, but social media lit up with the revelations. Twitter users pointed out that of the four accounts Yildirim’s official account follows, one of them belongs to Malta President Marie-Louise Coleiro Preca. Yildirim’s office issued a statement saying he only followed her after she followed him.

Cumhuriyet, one of Turkey’s oldest dailies, is at the center of a criminal trial in which 17 of its staff members are accused of aiding terrorism in connection with the paper’s critical coverage of the government.

The Istanbul-based paper joined hundreds of colleagues from 96 media organizations around the world to examine the Paradise Papers as part of an investigation by the Washington-based International Consortium of Investigative Journalists. The latest release followed last year’s Panama Papers, when nearly 12 million documents were leaked to reveal legal information about more than 200,000 offshore businesses.