Turkey’s newly re-elected President Recep Tayyip Erdogan has promoted his son-in-law in law to finance minister among other steps to tighten control over the country's economic policies. 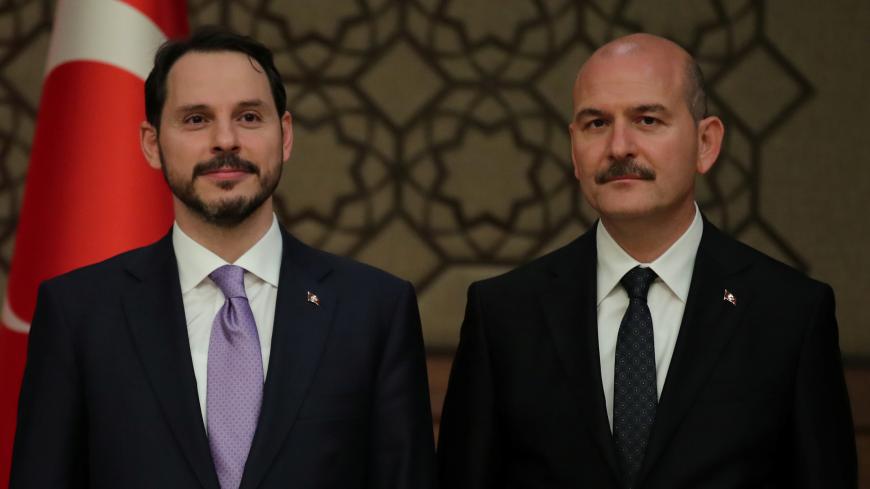 Just when you thought he couldn’t get any more audacious, Turkey’s President Recep Tayyip Erdogan put his son-in-law in charge of the country’s finances and issued new decrees that will radically reshape the way the country is run within hours of being sworn in on July 9 for a second term.

Berat Albayrak, the previous energy minister, will be in charge of the Treasury and Finance Ministry, replacing the market-friendly Mehmet Simsek in the new Cabinet, where Foreign Minister Mevlut Cavusoglu will retain his post. Markets reacted negatively to news of Simsek’s exit with the Turkish lira slumping to 4.7488 to the dollar, a more than 3% drop, amid worries that Albayrak will bow to his father-in-law’s unconventional views on the economy. Erdogan believes that high interest rates fuel inflation and has bullied the Central Bank to keep them down, allowing contractors to borrow cheaply and help sustain high growth.

Albayrak sought to ease market concerns in remarks he made as he formally assumed his new portfolio. "We will work hard to reduce inflation. We shall be entering a period in which we will see independent institutions improving their performance in harmony with global policies," he said.

An emergency decree scrapping a five-year term limit on the Central Bank governor issued prior to Erdogan’s inauguration had already signaled his determination to continue to meddle in the bank’s affairs. A new decree announced on June 10 allows the president to appoint the Central Bank governor and his deputies along with the body’s monetary policy committee for a period of four years. None of this bodes well for Turkey’s shaky economy, with stocks falling by 2.3% and bank shares melting to the tune of 4% in a single day.

According to official data, Turkey’s economy grew by 7.4% last year, making it the fastest-growing economy among the G-20 countries and creating 1 million new jobs — “truly impressive,” according to the International Monetary Fund. But it, too, has warned of overheating, pointing to rising inflation and a ballooning current account deficit. The more than $245 billion in foreign debt owed by Turkey’s private sector is adding to vulnerabilities, with some overwrought economists warning of an impending currency crash.

Albayrak’s appointment took pundits by surprise. Many speculated he would serve as Erdogan’s eyes and ears in his ruling Justice and Development Party (AKP) when he ran for a parliamentary seat from Istanbul in the June 24 polls. Under the new system, lawmakers are barred from joining the Cabinet, so Albayrak was forced to relinquish his seat. The move is a risky one. Should Turkey’s once robust economy — one of the key pillars of the AKP’s enduring popularity — go bust, the blame will fall on Albayrak and Erdogan. As people grow poorer, they will be less likely believe the AKP's long-running claims that foreign powers are responsible for all that ails Turkey.

“Albayrak will have to move very quickly to reassure financial markets — and will need to send a signal that he will listen. The economy faces a very challenging time and this is a time for orthodoxy,” tweeted Timothy Ash, a veteran economist who follows Turkey and other emerging markets.

Turkey’s biggest industrialists lobby TUSIAD aired its concern in a July 10 statement, noting, “For a strong Turkish economy, the rule of law, the independence of supervisory councils, particularly the Central Bank … are of vital importance.”

One of Albayrak’s first moves, however, was apparently to secure the censoring of several tweets by Turkish journalist Pelin Unker of the opposition daily Cumhuriyet. “Berat Albayrak blocked access to our stories about the Paradise Papers. I guess that wasn’t enough; now he’s blocked access to the following tweets. I wish him success in his new job. I would like to take the opportunity to remind you that the hearing of the court case Berat Albayrak filed against me has been postponed until Nov. 22, 2018,” she tweeted together with screenshots of the court orders censoring her posts. Unker is facing trial for a series of articles referring to Albayrak’s alleged involvement in establishing offshore accounts when he was CEO of Turkish conglomerate Calik Holding before he left in 2013.

The Cumhuriyet articles were part of a collaborative effort led by the International Consortium of Investigative Journalists, who curated millions of leaked documents known as the Paradise Papers exposing alleged tax evasion via offshore accounts. The papers constitute the second-biggest data leak after the Panama Papers, and implicate former Turkish Prime Minister Binali Yildirim’s sons as well. Yildirim has denied any wrongdoing and taken legal action against Cumhuriyet over the claims.

In any case, pressure on Turkey’s beleaguered media is unlikely to ease. The Press and Information Directorate, which issued press credentials to Turkish and foreign reporters, has been abolished and its authority transferred directly to the president.

Unker remains undeterred. She told Al-Monitor, "It seems [the authorities] want these stories to be forgotten. But we will carry on with our reporting in the public's interest. We will not bow to pressure in this new era."