No love left for Erdogan’s son-in-law

The resignation of the Turkish president's son-in-law Berat Albayrak as finance minster has elated journalists, bureaucrats and academics as well as elites in the ruling party. 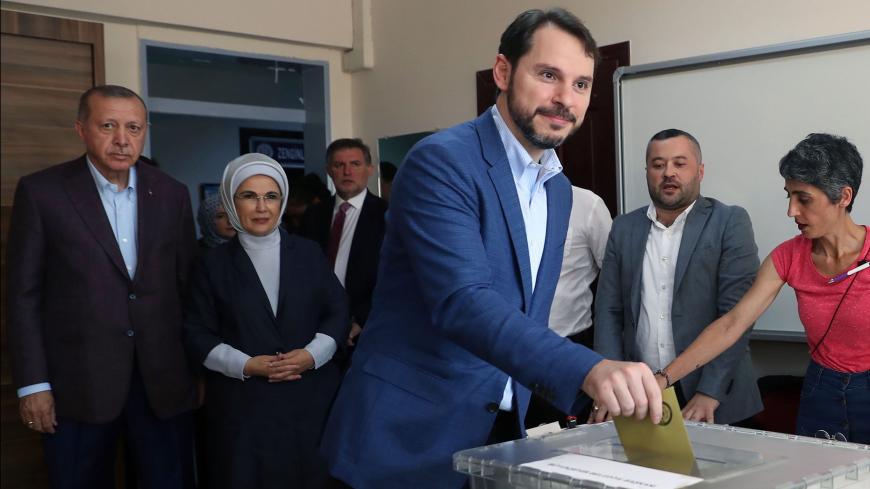 When Turkish Minister of Finance Berat Albayrak resigned over Instagram Nov. 8, it took over a day for any official or bureaucrat from the ruling Justice and Development Party (AKP) to acknowledge it. Finally, Turkish President Recep Tayyip Erdogan’s communications office announced that Albayrak will be permitted to leave his position.

Albayrak, who married Erdogan’s oldest daughter in 2004, had been at the post since Turkey switched to the notorious executive presidential system in 2018. He served as energy minister from 2015 to 2018. His Instagram post instantly went viral even as Albayrak’s other social media accounts were shut down. That account is now inaccessible as well. Right after Erdogan announced Albayrak’s release from the post, he appointed Lutfi Elvan in his place. Citing health reasons, Albayrak did not attend the swearing-in ceremony.

Amid the fog of misinformation, some analysts reported rather jarring allegations as to what happened between Erdogan and Albayrak. One claim was that Albayrak was upset about a newly appointed Central Bank head. Another was that dozens of AKP lawmakers threatened Erdogan to switch to an opposition party if Albayrak was not fired. Another argued Erdogan wanted to change the leadership of the economy.

Al-Monitor spoke about these claims with several sources in Ankara, and they indicated that the truth involved a deep rift between Erdogan and Albayrak that may now have consequences for the former minister’s family businesses as well. The real reason is “betrayal,” said multiple AKP elites. Albayrak was appointed to these positions exclusively due to his family links, but he now seems to have lost Erdogan’s confidence.

The jubilance over Albayrak’s departure went beyond the financial markets and social media. The mood is between a victory and a holiday celebration, said multiple people from Ankara, Izmir and Istanbul. Why are so many Turks — not just bureaucrats but also academics, journalists and business people — so happy about the departure of their finance minister?

The first reason seems to be the “son-in-law effect.” Ottoman history is laden with horrible stories of sons-in-law bringing down powerful patriarchs. Similarly, the modern history of Turkey’s neighbors such as former Iraqi President Saddam Hussein and former Egyptian President Gamal Abdel Nasser also include sons-in-law who were involved in political and military affairs. There is a strong collective repulsion against the political empowerment of sons-in-law, along with fear of the return of family-centered rule. Although nepotism represents a much bigger problem than Albayrak’s political appointment in Turkey, his position in Erdogan’s family specifically riled the public.

Albayrak’s failure to inspire respect and confidence among finance moguls affected not only the health of the Turkish economy but also the professionality of the banking staff. Several bankers complained to Al-Monitor that Albayrak made extreme demands from senior bankers at the state banks, and those who did not comply were promptly replaced, even if they were the chairman of the Central Bank. They said they could not complain about these outrageous and counterproductive demands by the minister. One banker said, "Even now talking to you I feel uneasy. They are close family members and if they mend their bridges, he can become the minister again overnight. So we must all be cautious.”

Though a similar line of caution was common among the jubilant and despite the pandemic, people are marking the occasion at restaurants, offering each other cigars and other celebratory gifts.

Albayrak’s influence and gatekeeper position was not limited to politics and resignation has given a bit of a breathing room to the press. His older brother, well-known businessman Serhat Albayrak, is the vice chairman of the Turkuvaz Media Group and the president of the notorious pro-government think tank SETA. German government sources have claimed Albayrak is the financier of the think tank, not just its president. SETA made the news in 2019 for its detailed profiling of journalists, reporting that was used as evidence to prosecute journalists on bogus charges.

“Before Albayrak was officially in politics — that is, pre-2013 — Erdogan kept a diverse group of people around him to ask their opinions, to exchange ideas. There were different networks who would compete to influence the administration. After Albayrak’s descent onto the scene, gradually these diverse networks were eliminated. Albayrak had Erdogan’s ear exclusively,” a senior bureaucrat told Al-Monitor.

Another bureaucrat who was forced into early retirement commented that several people were removed from their positions or blocked from promotions in the public and private sectors at the whim of the Albayrak brothers. “We are just now happy that the president saw them for what they really are. They have isolated the president and hurt the country maybe more than they have harmed me personally.”

Albayrak’s relations with the media raised several red flags, starting with the firing of former Prime Minister Ahmet Davutoglu. A mysterious blog calling itself the Pelican Brief was seen as the main reason behind Davutoglu’s departure. Since 2016, the Pelican clique, also called the Pelicanists, became an influential tool in Turkish politics. Their target has been mostly AKP figures who have failed to please the Albayrak brothers. AKP elites have referred to them as a “terror group” more dangerous than the Fethullah Gulen movement. Simply, they have used their family connections for revenge against many people.

Some Turks are taking the resignation as a sign that Erdogan now is ready and willing to restore some normalcy to Turkish domestic politics. “It is like the end of a war; maybe we can go back to 2012 again,” said a journalist who has lost her prestigious job.