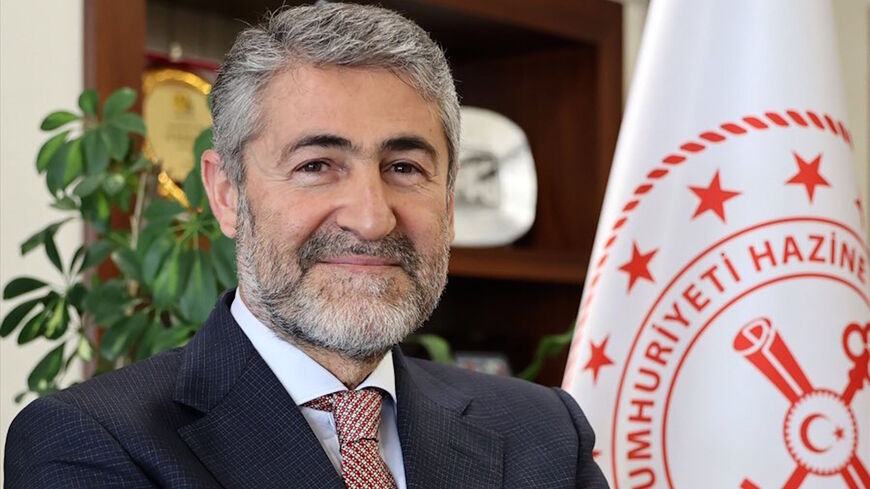 As Turkey’s economic crisis deepened, President Recep Tayyip Erdogan replaced his treasury and finance minister, a skeptic of the president’s unorthodox economic policies, with Nureddin Nebati, a champion of his low-rates policy.

A businessman turned politician, Nebati is a former member of the Independent Industrialists and Businessmen Association, a group that has consistently backed Erdogan’s adamant stance against interest rate hikes. He has previously served as deputy chair of the Justice and Development Party (AKP) and headed financial and administrative affairs. A member of parliament since 2011, he was named deputy treasury and finance minister in 2018.

A decree published in the Official Gazette in the early hours of Dec. 2 indicated that Elvan “asked to be excused from his job,” ending the weeks-long saga about a deepening rift between the president and Elvan, who holds a graduate degree in economics from the University of Delaware.

During the Dec. 2 handover ceremony, Nebati made it clear that he would toe the line drawn by Erdogan. “Our most important priority will be investment and employment, not high interest rates,” he said. “We will take all necessary steps …  to implement the policies determined by our president.”

The change of guard took place in a volatile week. On Wednesday, the Central Bank announced it would directly intervene by selling foreign exchange reserves and conducting transactions on the Borsa Istanbul Derivates Market “due to unhealthy price formations in exchange rates.” The Turkish lira lost 28.3% of its value against the dollar last month, making a series of record lows. Following Elvan's resignation, the currency weakened as much as 2.1% Thursday, erasing all the previous day’s gains after the Central Bank intervention.

As Erdogan stepped up his “economic war of liberation” rhetoric, Nebati rushed to his defense last week, claiming that Ankara had long been trying to implement a policy of low rates but had faced strong opposition. He said that Turkey was committed to keeping interest rates low in current market conditions but faced “manipulative attacks” on the Turkish lira.

After his midnight appointment, his first message on Twitter thanked the president. “May God make it easy, not difficult. My God, help bring things to a beneficial conclusion. Make us successful, make us just in our work,” he tweeted.

AKP ministers and top bureaucrats raced to congratulate the move but the opposition was skeptical. “I was surprised that he was brought to the deputy minister’s post in 2018, given that he had no economy background,” Ozgur Ozel, a deputy of the main opposition Republican People’s Party, told HalkTV. Nebati, 57, has a doctorate in political science and public administration.

“He was simply given the post because he was close to Berat Albayrak [Erdogan’s son-in-law who held the post of finance minister 2018-2020]. The other reason is that they would have difficulty finding anyone who would bow to the president’s policies. The last one, Elvan, could not. They have now found the ultimate yes-man,” Ozel said.

Described by the Financial Times as “the last remaining voice of economic orthodoxy,” Elvan grew increasingly isolated in Erdogan's economy team. His remarks on the need to maintain the independence of institutions were interpreted as criticism of the president’s heavy hand on the Central Bank.The rift between the president and Elvan had become evident two weeks ago after Erdogan told AKP parliamentarians that he “cannot and will not” go along with those who defend interest rates. While all other party members applauded the president, Elvan sat back without clapping, giving rise to predictions that his head would roll within the week.

Elvan, who held the job for slightly over a year, was hand-picked by Erdogan after his son-in-law Albayrak, in a rare gesture of rebellion, posted his resignation on Instagram, leaving behind rumors that he had grown fed up with being side-stepped by the president.

“It hardly matters who the finance minister in Turkey. It is the will of the president that counts,” remarked Ankara-based journalist Unsal Unlu as he announced the news in his morning podcast. “The president’s economy team is a high-turnover one. We have seen five Central Bank governors in five years. … The key point in the economy was the sacking of Naci Agbal, who focused on reducing inflation and advocated restrictive demand-management policies.”

Erdogan has sacked four governors of Central Bank since 2016, finally settling on Sahap Kavcioglu, a finance professor and columnist at the pro-government Yeni Safak newspaper. Fully adhering to Erdogan’s low-interest-rate policies, Kavcioglu removed several high-ranking bureaucrats last month to quell the opposition to rate cuts. The Central Bank has cut rates three times since September, slashing 400 basis points from its policy rate to bring it down to 15% last month, well below inflation of nearly 20%.

The first choice for Elvan’s successor was not Nebati, according to some analysts. Fatih Altayli, the commentator for daily HaberTurk, said that the president wanted Erisah Arican, the deputy chair of the Wealth Fund and the academic adviser to the doctoral theses of both Albayrak and Kavcioglu, for the post. Arican, however, could not be persuaded, Altayli said.

Many social media users claim that his appointment indicates that Albayrak has regained influence, posting and retweeting a photo of the two men eating in a restaurant in August. He is also a member of the Turkish Youth Foundation, an association linked to Erdogan’s younger son.