Realizing that its current allies are not sufficient to secure Turkey’s interests in Libya, Ankara is now seeking to include Gadhafi family members into its calculus. 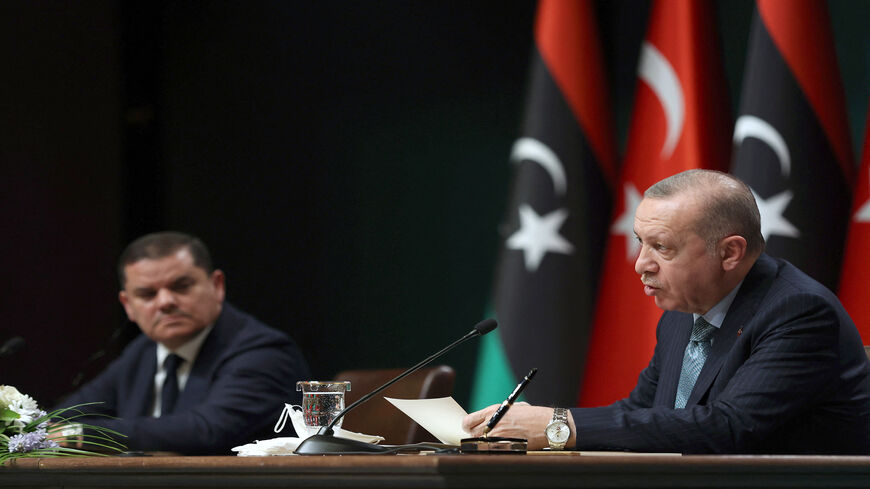 Having loosened its close ties with the Muslim Brotherhood in a bid to normalize its relations with the major actors of the Arab world, Turkey is now reviving its approach in Libya by involving family members of former Libyan leader Moammar Gadhafi and his supporters into its calculus.

On Sept. 5, the Libyan authorities released Saadi Gadhafi, one of Gadhafi's sons, from jail, along with other prisoners including Ahmed Ramadan, who was known as the right-hand man of the late Libyan leader. Turkey seems to have played a role in his release.

Following his release from a Tripoli prison, Gadhafi immediately traveled to Istanbul via private jet. A Libyan source familiar with the affair told Al-Monitor that Gadhafi then left Istanbul for Cairo. Why Gadhafi didn’t directly fly to Cairo raised question marks.

According to the Libyan source, Turkish authorities considered a direct flight from Tripoli to Cairo “unsafe,” thus parties arranged for a connecting flight via Istanbul in coordination with the Turkish authorities. Although what kind of security concerns would emerge from a direct private flight to Cairo from Tripoli remains unclear, Gadhafi’s departure for Istanbul has clearly emphasized the Turkish role in the process. This role will likely be noted as Turkey’s “good faith” in the Libyan political process.

Prior to 2011, Turkey had excellent relations with Libya. Amid talks of a possible international intervention to the popular uprisings in the country, the late Gadhafi was still sanguine about prospects for Turkish President Recep Tayyip Erdogan's support.

“Turkey will surely change its stance when it realizes the true nature of the events,” he said in an interview with Turkish public broadcaster TRT just 10 days before the intervention. “Turks are our brothers. We share a common history. Our people have lived together for centuries. We are all Ottomans.”

Yet, despite his previous oppositions to a NATO operation in Libya, Erdogan rapidly made a U-turn. He allowed the operation to be headquartered in Turkey’s Aegean province of Izmir and soon became a major actor in the Libyan proxy war.

Although the former Libyan leader’s fall was swift amid the 2011 NATO operation, the Gadhafi family will likely play a role in Libya's future. Seif al-Islam Gadhafi, Saadi’s brother who was widely seen as a successor of his father, told The New York Times in July that he believed his movement could restore the country’s lost unity.

When the Biden administration opposed his return to politics saying that Seif Gadhafi was “a war criminal,” the Supreme Council of Libyan Tribes lamented the administration’s statement as “a rude interference into Libya's sovereignty.”

Moreover, former regime figures who were ousted during the Arab Spring have already made a comeback in Egypt and Jordan, further emboldening assumptions about the Gadhafi family’s return to Libya.

Reviewing its options in Libya in a bid to secure its economic and political interests, Ankara cannot ignore this possibility. These interests include safeguarding the controversial military cooperation and maritime delimitation deals that Ankara signed with the Tripoli government.

Many former Gadhafi supporters aligned themselves with Libya's eastern-based commander Khalifa Hifter, who has led the fight against the Turkey-backed Tripoli forces. Thus, Turkey’s involvement into Saadi Gadhafi’s release might be aiming to achieve two separate goals: disbanding the Gadhafi followers among Hifter’s ranks in a bid to empower its allies in Tripoli and investing into a scenario of a possible comeback of the Gadhafi family.

Having realized that its allies based in Tripoli would not be able to secure Turkey’s interests alone and that the situation on the ground would be more volatile following the Dec. 24 presidential elections, Ankara is now seeking to diversify its allies.

The release of Saadi Gadhafi seems to be welcomed by the Libyan people as well. Officially launching a national reconciliation process Sept. 7 following the release of Gadhafi and other prisoners, Mohammad Younes Menfi, chairman of Libya’s Presidential Council, said the reconciliation process “reflects a real desire of Libyans to overcome differences, renounce division, stop the bloodshed and put an end to all sufferings."

Clearly, the release of some prisoners from jails was hardly a surprising development amid the ongoing reconciliation process and election preparations. Prime Minister Abdulhamid Dbeibeh also cited a need for reconciliation announcing Saadi Gadhafi’s release.

“We cannot move forward without achieving reconciliation,” he wrote on Twitter.

Gadhafi fled to Niger in 2011 following the fall of his father's regime. He was extradited to Libya in 2014 and has been imprisoned on charges of embezzlement and murder of a soccer coach. A Libyan court exonerated him from all charges in 2018, but he wasn’t released by the Libyan authorities.

Dbeibeh most likely coordinated the move with Turkey. Previously, Dbeibeh’s predecessor, Fayez al-Sarraj, also attempted to free Gadhafi but his attempts failed due to in-house rifts.

Under the current circumstances, Turkey-backed Tripoli and Misrata-based forces have scored a point with the “compassion show.” The upcoming developments might undermine the support pillars of Hifter. Ramadan hails from Esabia, a city south of Tripoli, which has been a Hifter stronghold until now. Yet his support among the city residents will likely diminish after Ramadan’s release.

For now, Tripoli-based political actors appear quite distant to the idea of the Gadhafi family’s comeback to the Libyan political scene. Their possible return will likely disrupt Hifter’s plans for leadership as well as upsetting his archenemy — the Libyan Muslim Brotherhood — at the same time. Indeed, the Brotherhood leaders in Libya are said to have been uncomfortable with Gadhafi’s release, but went through the motions.

Meanwhile, some Arab media outlets have claimed that Turkey was aiming to form an alliance between Muslim Brotherhood and Gadhafi supporters in order to assuage the former regime supporters’ opposition to the Turkish presence in Libya and to undermine Hifter.

According to Al-Arab newspaper, in a Misrata meeting over the release of prisoners, parties discussed disclosure of the location of Moammar Gadhafi’s grave where he was buried secretly. Former Libyan Interior Minister Fathi Bashagha, who has close ties with Turkey, was also present at the meeting, the report said.

According to the Libya Desk news website, plans for Gadhafi’s release led to a rivalry between Qatar and Turkey as well. Doha was seeking to relocate him in Uman with his family members, while Ankara was searching ways to mend its ties with former regime supporters. The website argued that Dbeibeh threw his weight around Turkey.

According to the site, Turkey’s message was clear: “A week after the [United States] expressed its opposition to Saif AlIslam’s nomination for presidential elections, we welcomed his brother. While other international actors are fearful of breaking norms of dealing with you, we aren’t.”

Turkey might be seeking to expand the reach of the reconciliation process, but a possible comeback of former regime elements might also mark a vengeful chapter against Turkey.