The assault on the vocal dissident comes at a time of tightened grip on artists, singers, and dramatists. 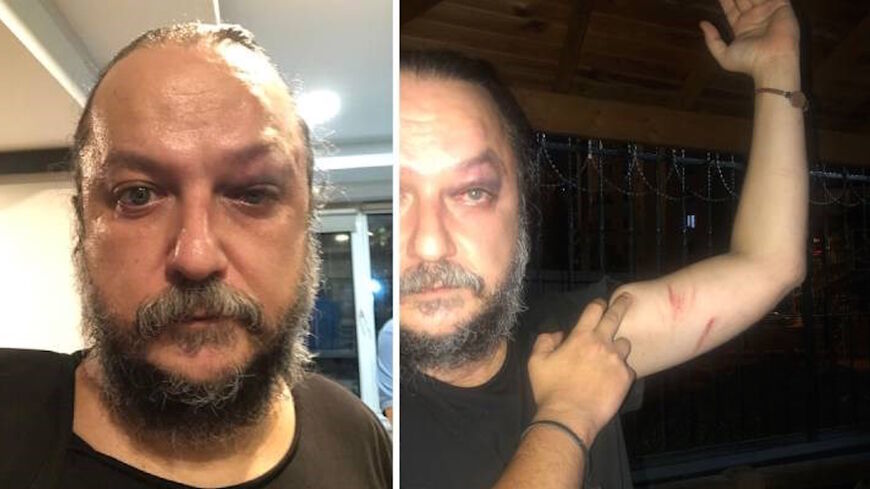 Guvenc Dagustun, an opera singer, was on his way home after a huge Aug. 30 concert marking Victory Day when he was assaulted by two men.

“They hit me and kicked me to the ground,” tweeted Dagustun, who also writes a sardonic column at left-wing daily Birgun. He posted photos that showed his black eye and the bruises on his arm.

Erol Onderoglu, the Turkey representative of Reporters Without Borders (RSF), condemned the attack. “The assailants must be caught and it must be found out whether it was done by those fostering systematic attacks against the press,” RSF tweeted.

“Two people who were running away after the attack have been detained by the police but they deny carrying out the attack,” Dagustun’s attorney Serkal Guven told Al-Monitor. “We think that this may be a political attack. He is a vocal dissident figure and might have outraged different groups.”

When the two men were released by the Istanbul prosecutor’s office Wednesday afternoon, Dagustun posted a note on Twitter. “Just as expected, the two men are now free,” he said. “So justice is not so just, as Master Sensoy said,” he tweeted, quoting Ferhan Sensoy, a popular dramaturgist who died on Aug. 31. “But I will continue to speak out on what I think is right and suggest you do the same.”

Dagustun, who has 62,000 followers on Twitter, has been a sharp critic of the government both in his columns and on social media, particularly on the government’s failure to provide aid to the arts and culture sector during the pandemic, the overall restrictions on artistic expression and statements of Turkey’s Directorate-General of Religious Affairs. A month ago, a Twitter user reported a tweet in which he called a pro-governmental legal expert a “blockhead.”

“It seems that the trolls of [pro-government Pelican Group] filed a complaint against me,” Dagustun wrote in his column in Birgun. The inquiry continues, his lawyer said.

Dagustun is the second Birgun columnist to be attacked by unknown men in less than two months. On June 7, Erk Acarer, a journalist in exile who wrote a weekly column in Birgun, was beaten outside his home in Berlin by three attackers who threatened him to stop writing. Acarer said that the attackers were henchmen for the coalition formed by the Justice and Development Party and the Nationalist Movement Party. The investigation continues and no one has been charged yet.

The attack against Dagustun also takes place against the backdrop of an increasingly suppressive atmosphere against writers, artists, singers and actors in Turkey. Measures against freedom of expression range from banning plays, stopping distribution of books and prosecuting and jailing artists for “insulting the president.” A report by Freemuse, an independent international organization that defends freedom of artistic expression, says Turkey ranks third in artists imprisoned in 2019, followed by Myanmar, Egypt and China.

In August, when a group of writers, musicians, artists and thespians made a joint statement on their concern on Turkey’s governance, the rising poverty, the forest fires and the country’s refugee policy, Erdogan brushed them off harshly. “If they are artists, let them carry out their art. … But it is not their place to call for early elections or criticize the presidential system. They should not stick their nose in that. Politics is not their business, it is ours,” he said in televised comments, adding, “I simply turn a deaf ear.”

But the president can hardly be said to turn a deaf ear when it comes to tweets that target him directly. In August, Turkey’s iconic actor Genco Erkal was charged with insulting President Recep Tayyip Erdogan in years-old tweets. One of them, dated 2016, mocked the president’s calls for families to have three children and asked him to show his university diploma — a touchy subject given that the lack of one means that Erdogan was never eligible for the presidency. Another from 2020 said that everything Erdogan touches “turns to concrete” in response to the president’s claim that he will reforest the Black Sea valley of Ayder.

Erkal, who faces up to four years and eight months in prison, said in an interview with Diken, an independent online media outlet, that as a dramaturgist in political theater, his job is “to criticize, on stage or on social media, what I see as wrong.” He accused the government of “drawing a lottery” among the dissident intellectuals. “They pick up on one or two to intimidate the others,” he said.

Erkal, who has incarnated Socrates, Bertrolt Brecht and Turkish poet Nazim Hikmet on stage during his six-decade career, currently stars in a musical political play on the life of Ahmet Arif, a Diyarbakir-born poet who spent two years in prison. “It was a short time but he was under constant and heavy torture,” said Erkal of the poet, who wrote but a single book of poems. “If he were alive today, he would have rebelled against the current repression.”

Shortly after the interview, Erkal tweeted that he was desperately seeking open-air theaters where he can stage the play, complaining, “There are either no open-air theaters or the trustee mayors, governors or university deans do not allow us to perform there.” Within minutes, invitations from municipalities led by the opposition poured in. On Sept. 4, the western city of Luleburgaz will host the play.