Prime Minister Abdallah Hamdok said the plotters have been arrested. 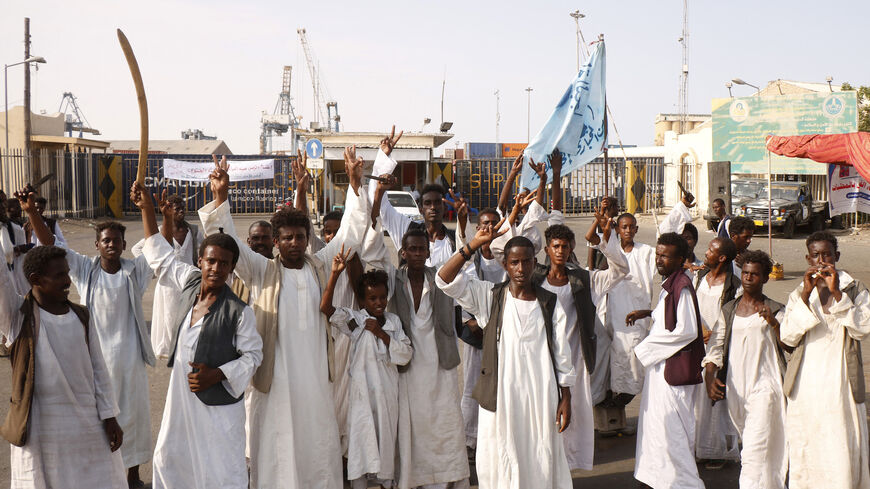 Sudanese protesters gather outside the main entrance to the southern port in Port Sudan on Sept. 20, 2021. - IBRAHIM ISHAQ/AFP via Getty Images

Prime Minister Abdallah Hamdok said the plot was hatched by both civilian and military officials, and that those involved had been detained for questioning.

“There is a special committee investigating what has happened,” Hamdok said.

Sudanese officials have not yet named those allegedly behind the attempt, but assured the public and the world that the security situation in Khartoum was fully under control.

Tuesday’s events showed the precariousness of Sudan’s transition to democracy following the popularly backed military overthrow of longtime-dictator Bashir in 2019.

“What happened was an orchestrated coup by factions inside and outside the armed forces. This is an extension of attempts by remnants [of the former regime] since its fall to abort the civilian democratic transition,” Hamdok said in a televised speech.

Agence France-Presse reported that traffic was moving normally in Khartoum on Tuesday but that security forces had closed one of the main bridges linking the capital with the neighboring city of Omdurman just across the Nile River.

The coup attempt came at dawn, according to state news, and may have originated with elements of the military, Al Jazeera reported. Conflicting reports emerged over the number arrested, but the Sudanese army said it had arrested 21 military officials in addition to other soldiers.

Influential Sudanese Gen. Mohamed Hamdan Dagalo, known as “Hemeti,” voiced support for the transitional government in which he plays a leading role.

“We will not allow a coup to take place,” Hemeti said in a speech to Sudanese troops on Tuesday.

“We want real democratic transition through free and fair elections, not like in the past,” he said.

While causes of the coup remain unclear, it came as high inflation and unemployment rates have raised concerns over rising popular discontent.

Protests have been repeatedly erupted over the past year against International Monetary Fund reforms as well as calling for accountability for the crimes of the previous regime. Protesters took to the streets in the country’s eastern trade hub, Port Sudan, over the weekend to oppose a peace deal signed last year with rebel groups in Darfur.

Disagreements within the state apparatus have also emerged into the public eye in recent months. Earlier this summer, transitional government leaders were quick to deny reports of internal tensions over Hemeti’s refusal to integrate his Rapid Support Forces into the Sudanese army.