Khartoum witnessed an attempted coup, which highlights the urgent need to unify civil and military institutions following the fall of Omar al-Bashir’s regime. 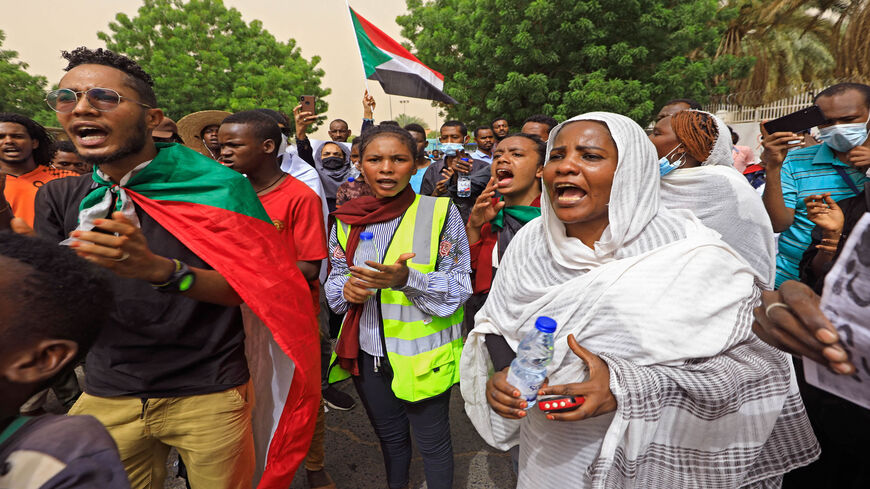 Sudanese protesters shout slogans and carry banners as they march during a demonstration calling for justice for protesters killed during anti-government demonstrations two years ago, Khartoum, Sudan, June 3, 2021. - Ashraf Shazly/AFP via Getty Images

In a bid to derail the revolution that removed President Omar al-Bashir from power in December 2019, a group of armed operatives from the Sudanese army said to be loyalists to Bashir led a failed military coup in Khartoum Sept. 21.

Sudanese Prime Minister Abdullah Hamdok said that the coup attempt sought to target the revolution’s achievements, stressing that it was orchestrated by parties from within and outside the Sudanese army.

Speaking in a televised speech Sept. 21, Hamdok noted that the coup attempt was preceded by extensive preparations reflected in security chaos and incitement against the government.

Salah Halima, former assistant foreign minister, said that the remnants of the previous Sudanese regime that had stayed in power for 30 years are behind the attempted putsch.

“The former regime managed to control the cogs of the state’s machine. Therefore, we could say that the Sudanese army has become ideological given the large-scale incorporation of Muslim Brotherhood members in the military institutions just like the rest of the state’s institutions, such as the Foreign Ministry and other ministries that still contain remnants of Bashir’s regime,” Halima told Al-Monitor.

“The Muslim Brotherhood in Khartoum was behind this attempted coup. It is also likely that the group received external support from countries that espouse the same ideology. The fact that the armed forces were able to foil this military coup is a clear indication the Sudanese army is well aware that the Muslim Brotherhood is trying to tamper with the country’s capabilities,” he said.

Halima argued that undoubtedly there is some kind of division within the armed forces. “There are several military and security components in Sudan, a situation that is criticized by some political forces. However, there must be a single structure that would bring all these institutions to work together under the same umbrella,” he noted.

He said, “There are also divisions within the civil political forces, which are in turn criticized by the military. This means that both sides lack confidence in each other. These differences and divisions between the civil and the military components of the Sudanese state served as fertile ground for these malicious [coup] attempts.”

Halima added, “The solution lies in finding trust and cohesion between the two sides. These two institutions should find an agreement during this transitional period. The current initiatives and movements in Khartoum suggest that there are efforts to bridge the gaps between the two sides, in a bid to restore confidence between the people and the transitional authorities and move forward in a democratic transitional phase. I think Hamdok's initiative [to unify Sudan’s institutions] is likely to be accepted by all parties and receive great support from the international community.”

In a Sept. 23 tweet, Wagdi Salih, member of Sudan's Empowerment Elimination, Anti-Corruption and Funds Recovery Committee, said, “Those who wish to protect the revolution and the democratic transformation, must take practical steps to restructure, dismantle and cleanse these institutions from [Bashir’s] remnants.”

Halima called on the Sudanese Sovereign Council to move quickly to implement the measures necessary to restructure the military institutions, and the need for the political forces to join hands in this regard.

Commenting on Ethiopia’s stance on the coup attempt, Halima said, “Under Bashir’s rule, relations between Khartoum and Addis Ababa were strong based on a common vision on regional and international issues related to both countries. Things have changed today. There is now a state of animosity and hostility between the two countries, namely in relation to the border conflict and the Great Ethiopian Renaissance Dam.”

“Therefore, it is likely that Ethiopia and other countries supporting the Muslim Brotherhood are implicated in the failed coup. We must, however, wait for the results of the investigations into the event,” he added.

Egypt's former ambassador to Sudan, Mohamed el-Shazly, told A-Monitor, “The coup attempt proved the presence of the former regime’s remnants that are actively trying to turn back the clock. Both the civil and military institutions of the state must pay close attention to such a danger and work together to eliminate it.”

“The transitional authority must also work to unify Sudan’s internal and external fronts in order to get through the transitional period and to foil any malicious attempts aimed at destabilizing Khartoum,” he said.

Khaled al-Tijani, head of Sudan’s Elaph newspaper, told Al-Monitor, “The coup attempt is an explicit expression of a state of rebellion and intense tension within the military establishment vis-a-vis the Sudanese army’s leadership.”

He stressed that this attempt clearly showed that the military institution is isolated given the deteriorating social and economic conditions, not to mention the failure in implementing the transitional period’s promises and the government’s poor performance.

“Securing the most basic needs has become a difficult task for most of the Sudanese people, and the military staff are no exception. I think we will be in for more coup attempts, even more violent than this one, should the bad economic and social conditions persist in the country,” Tijani said.

The international community condemned the failed coup attempt in Sudan, expressing all support for the transitional government.

Meanwhile, Sudan’s Defense Minister Lt. Gen. Yassin Ibrahim said during an emergency meeting of the Security and Defense Council that the preliminary investigation’s results showed that the coup was aimed at taking over power, stressing that all the implicated persons whose names figured in the probe were arrested.

The coup attempt was led by Maj. Gen. Abdul-Baqi al-Hassan Othman, along with 22 officers of different ranks and other noncommissioned officers and soldiers.