The Palestinian Authority is demanding the release of more prisoners following an escape at a high-security Israeli prison. 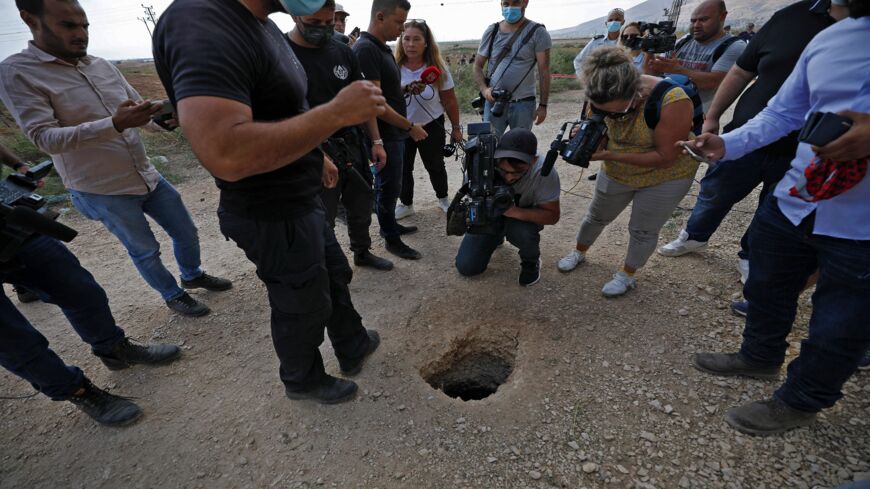 Police and journalists gather around a hole used by six Palestinians to escape from the Gilboa Prison after they dug a tunnel beneath a sink, in northern Israel on Sept. 6, 2021. The prisoners escaped through a tunnel dug beneath a sink, triggering a massive manhunt for the group that includes a prominent ex-militant, officials said. - JALAA MAREY/AFP via Getty Images

Israeli authorities are infringing on Palestinians’ rights during the massive manhunt for six escaped prisoners, according to Palestinian media.

The Hamas-affiliated SAFA Press Agency reported Thursday that Israeli authorities closed eating venues in prisons. They also said that Israel ordered an end to visits until the end of the year, citing a prisoner advocacy group.

The Arab-Israeli news outlet arab48 reported that police in the northern city of Acre prevented a protest in solidarity with the escapees from taking place, citing threats from right-wing Israelis.

Six Palestinian inmates escaped the high-security Gilboa Prison Monday ahead of the Jewish new year. Israeli forces are now conducting a massive search, and there have been large protests in solidarity with the escapees in the West Bank and Jerusalem. The men were in prison in relation to attacks on Israelis.

The incident has further damaged relations between Israel and the PA. Palestinian presidential spokesperson Nabil Abu Rudeineh avowed Thursday that there will be no peace until Palestinian prisoners are released, according to WAFA.

The internationally recognized PA sometimes works with Israel on security issues and is unpopular with much of the Palestinian population.

Some Israelis are also upset with the authorities over the escape. On Thursday, families of terror victims protested outside of Ofer Prison. They contended that prisoners are treated too leniently, the Israeli news outlet Arutz Sheva reported.